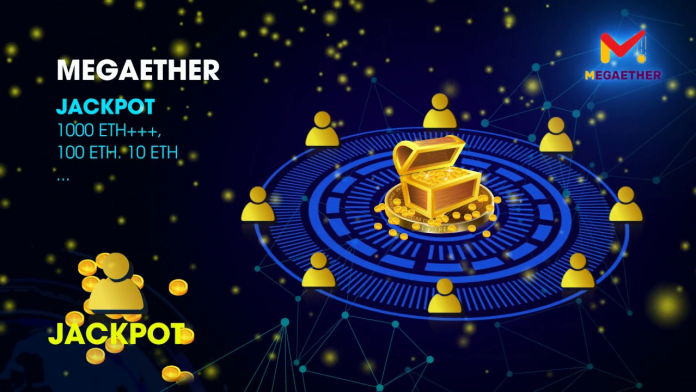 Lottery platform based on latest blockchain MegaEther has announced its new lottery with a grand prize of 1000 ETH and a total prize of up to 10,000 ETH.

While the global lottery industry has posted steady growth from $187.1 billion to $294.3 billion between 2004 and 2016, blockchain-based lotteries are widely regarded as the future. With increased transparency and borderless capability, blockchain lotteries can make the industry worldwide instead of geographically limited schemes that are prevalent today predominantly in the USA and Europe.

In addition to lottery services, a digital token is also being provided by MegaEther. The project has more than 500 million MEGA tokens but the in the initial delivery, only 50 million tokens will be released. The token holder will receive a 40% commission for all lottery sales that will be paid by ETH on a daily basis. The token can be exchanged and traded at the licensed E-Exchange lottery platform. Exchange gives an extremely user-friendly experience and allows users to purchase digital tokens from ETH and fiat payment methods such as PayPal and credit cards.

The token event is spread in three rounds:

MegaEther is essentially a DApp decentralized application running on the Ethereum blockchain. It is not under control of project developers, transparent and truthful.

Only supporters who are first-time buyers of the tokens receive 40% of the profit from the lottery business and a 5% commission directly from the referral token buyer. Selling a large number of tickets in the referral system enables the seller to receive 5-15% of revenue and become a ticket agent. Investors holding  tokens can send them to the smart contract to conduct Cold Staking to receive the 20% bonus each month.

Human intervention is eliminated by automating the process through smart contract features. Therefore, all forgeries are removed.

The winner is still anonymous and therefore less likely to be the target of scams or crime.

The platform cannot be monopolized because the government and even its founders do not have any control over the games.

More in-depth details and workings of the new lottery platform can be seen in the official whitepaper of the company. The whitepaper details intricate composition of the new platform including its functioning algorithm, sales commission figures promised, further token sale’s details and the staking contract that the company has set up for its digital tokens.

For more information on the project, please contact [email protected]

For more information about the project, please contact : [email protected]