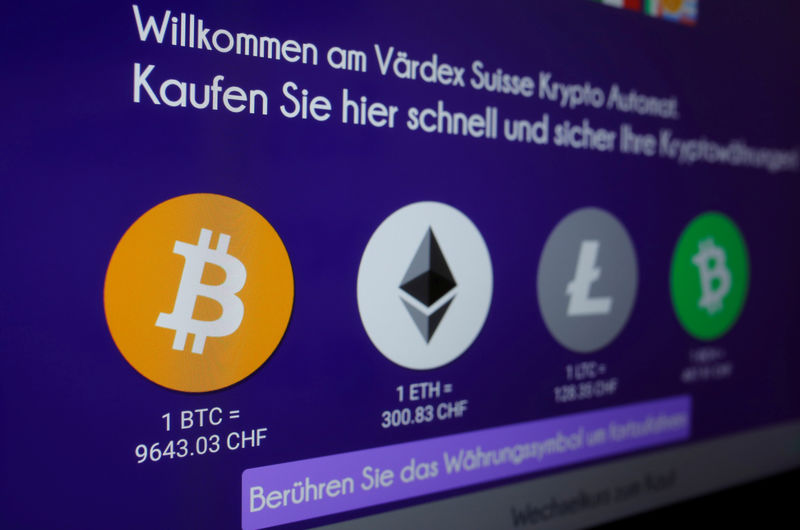 By Tom Wilson and Thyagaraju Adinarayan

LONDON (Reuters) – Bitcoin’s recent gains as stocks plummeted on U.S.-China trade tensions reflect not so much its safe-haven credentials but its potential for quick gains, cryptocurrency and foreign exchange traders said on Tuesday.

The biggest coin jumped over 7% on Monday as U.S. stocks slumped 3%. Safe haven assets from the Japanese yen to gold to government bonds – expected to hold or gain value amid turbulent markets – also rallied as investors fretted over the impact of the trade war on the world economy.

Crypto enthusiasts said the moves heralded bitcoin’s achieving its potential as a haven. , their argument goes, is immune to the impact of geopolitical tensions or government interference because of its decentralized nature.

Unlike government-issued fiat money, bitcoin is produced by miners across the world racing to solve computer puzzles. Its supply is also capped at 21 million, a scarcity aficionados say gives it an innate value, like rare metals.

And the correlation between falling stocks and rising bitcoin does appear to hold.

And when worries on a hawkish U.S. Federal Reserve amid escalating trade tensions and weakening future corporate earnings growth upset markets in December, bitcoin added 18% against a 10% drop for stocks in a week.

But driving bitcoin’s moves is less its safe haven characteristics than its potential for outsize gains, he added.

“If you’re wrong, you’re not losing lots of money, but if you’re right we are talking outsized returns,” said Swanepoel.

Like gold, bitcoin has also tended to move in concert with market volatility.

But any correlation with the behavior of traditional safe havens is likely more a short-term trend that an indication of anything longer-term, according to Forex.com analyst Fawad Razaqzada.

Bitcoin’s record of hacks and heists also undermines its credentials as a kin to gold, he said, adding that it does in theory have the potential to act as a haven.

“If exchanges solve the issue of cyber security, it could in the longer term be seen as a safe haven,” he said.

Cosmos Will Have 3 Coding Languages – Here’s Why That Matters