On July 31, Singapore’s central bank and financial watchdog issued an official warning, stating that the agency has become aware of a website that invited online users to invest in Bitcoin via an article containing falsified claims.

According to MAS, the scam website referenced fabricated statements falsely attributed to Goh Chok Tong, a local politician who served as Singapore’s second prime minister from 1990 to 2004. The statements were “either false, or were taken out of context and used in a misleading way,” the regulator noted.

The authority also presented a screenshot demonstrating these fraudulent statements. 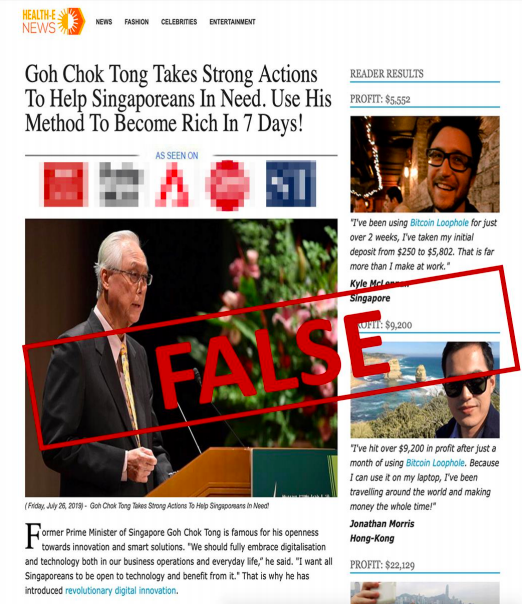 Website asks readers to deposit at least $250 into Bitcoin Loophole

As reported by MAS, the former prime minister’s name was used in order to make people deposit a minimum of $250 into the trading platform named Bitcoin Loophole, which claims to execute automated trades on users’ behalf. The platform also requested credit card or bank account details, the regulator added, advising the public to exercise extreme caution and avoid providing any information to the website owners.

Cointelegraph reported on Bitcoin Loophole in late June, when social media giant Facebook removed ads for a Bitcoin scam that mimicked posts by the crown prince of Abu Dhabi.

In January 2019, MAS issued a warning against a number of fraudulent websites claiming that the Singaporean government was officially adopting a cryptocurrency. Similarly to this new case, the fraudulent scheme was distributed via different websites and offered crypto investment opportunities using false information.

Bitcoin Recovery Breaks Back Over $10,000