The long and uncertain road toward crypto exchange-traded funds (ETFs) being approved by the United States Securities and Exchange Commission (SEC) took its latest turn on Aug. 12, when the regulatory body once again delayed its decision on three ETF proposals.

Below is a timeline of all the past and ongoing Bitcoin ETF proposals: 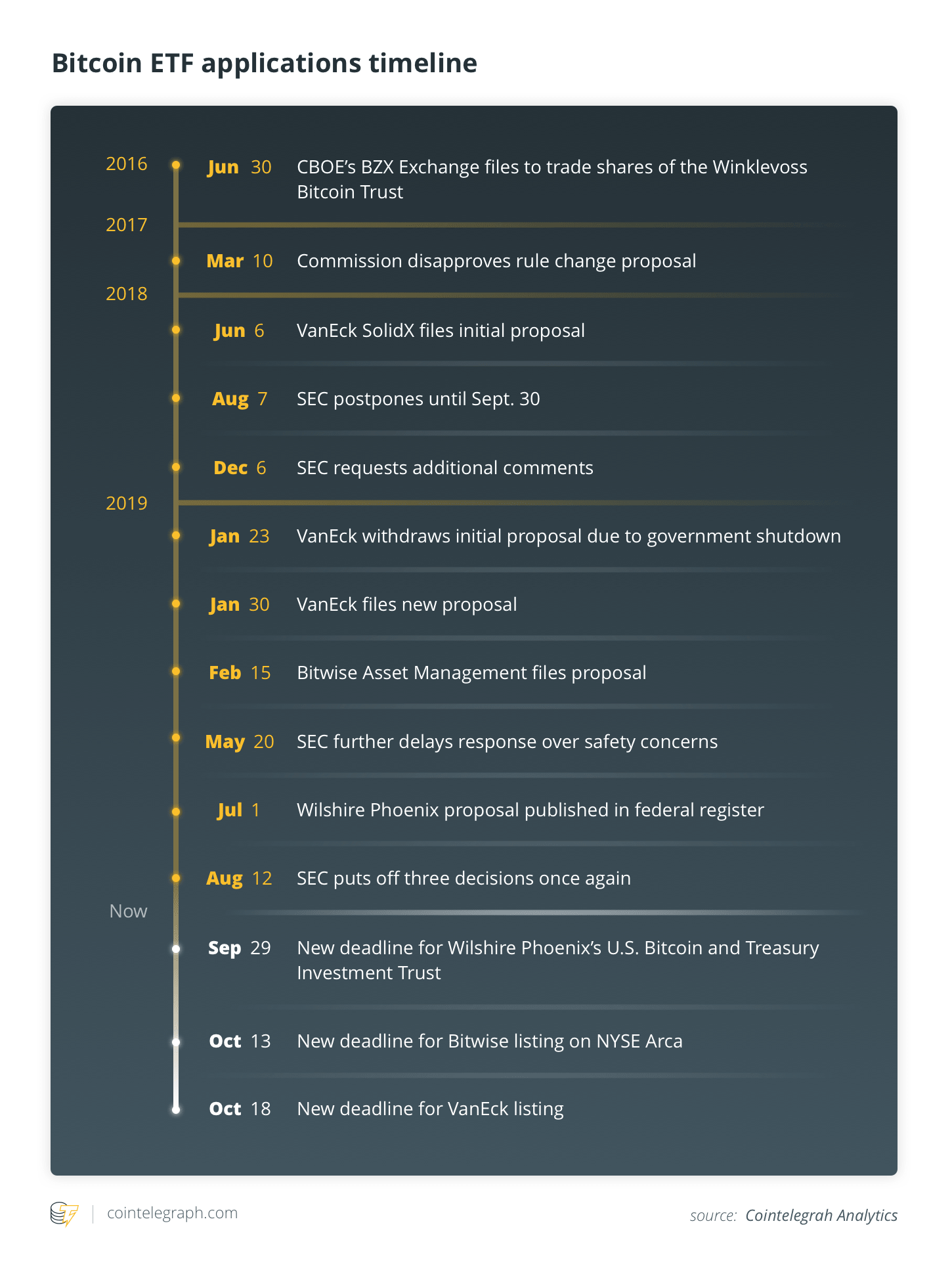 Similar to stocks in that they are traded on exchanges, ETFs are baskets of securities. ETFs track an index or basket that are proportionately represented in the fund’s share. The development and regulation of crypto ETFs are closely followed by a range of investors for two reasons. The first is that ETFs are tools for passive investment, which many believe will benefit the unregulated world of crypto exchanges.

A Bitcoin (BTC) ETF would be traded during the working hours of the stock exchange that it is listed on, a development that could make investing in crypto both easier and less risky. The second reason is that the introduction of ETFs will be a significant stepping stone toward mainstream adoption, with SEC approval theoretically broadening the range of investors investing in cryptocurrencies.

As per the release published by the commission on Aug. 12, the SEC announced that it will delay its decision on three proposed rules changes by the Chicago Board Options Exchange’s (CBOE) BZX Exchange and New York Stock Exchange (NYSE) Arca for three Bitcoin ETFs. The crypto ETFs hail from asset managers VanEck SolidX, Wilshire Phoenix and Bitwise Asset Management.

According to the documents, the commission will delay Wilshire Phoenix’s United States Bitcoin and Treasury Investment Trust to Sept. 20. Bitwise’s listing on NYSE Arca and VanEck’s listing will have to wait until Oct. 13 and Oct. 18 respectively. Regulators in the U.S. have historically taken an extremely cautious approach to cryptocurrencies, so this latest delay is hardly a surprise to many in the crypto community. The commission stated for each rule change proposal that:

Given that the adoption of ETFs would represent a landmark decision on behalf of U.S. regulators and a huge bound toward mainstream adoption, the SEC has exercised extreme caution when processing applications.

Not even the crypto industry’s biggest players are immune to the whims of the regulator, with an appeal to list and trade shares of the Winklevoss Bitcoin Trust by crypto titans the Winklevoss twins rejected on March 10, 2017. The SEC cited the lack of regulation in Bitcoin markets:

“When the spot market is unregulated — there must be significant, regulated derivatives markets related to the underlying asset with which the Exchange can enter into a surveillance-sharing agreement.”

The current version of the VanEck proposal was announced by the firm’s digital asset strategy director, Gabor Gurbacs, on Jan. 30, 2019. In tandem with the CBOE, the firm had initially withdrawn its previous submission for a rule change on Jan. 23 due to the 2019 U.S. government shutdown as the Feb. 27 deadline for the review loomed. According to legal experts, the SEC was operating on restricted basis due to the shutdown over funding for the proposed U.S.-Mexico border wall.

Although its current application has only been in existence since late January, VanEck has been in limbo since June 6, 2018, when the asset management company filed its initial request with the commission. SolidX CEO Daniel H. Gallancy was initially bullish on prospects for the request, though he recognized the SEC’s hesitancy regarding crypto ETFs, saying: “Regulators are concerned right now about having an ETF that is available to retail investors, but right now a good place to start is with a product geared purely toward institutional investors.”

Gallancy’s mention of regulatory concern turned out to be accurate, as the SEC consequently delayed its decision until Sept. 30. The notice published by the commission on Aug. 7, 2018 revealed that the SEC received more than 1,300 comments on the proposed rule change list. The document states that the SEC had up to 90 days to come to a decision.

Come December, the SEC then requested additional comments before it could publish a decision on the VanEck/SolidX ETF proposal. The notice stated that the SEC was soliciting responses on 18 key issues, including BZX’s claim that BTC is “less susceptible to manipulation than other commodities that underlie exchange-traded products (ETPs).”

Although many in the crypto community had hoped for a resurrection of momentum for the ETF proposals over Easter, it was not to be, as the SEC issued a further delay on May 20. The notice also outlined the SEC’s intention to scrutinize every aspect of the proposed rule change by the letter:

“The Commission is instituting proceedings to allow for additional analysis of the proposed rule change’s consistency with Section 6(b)(5) of the Act, which requires, among other things, that the rules of a national securities exchange be ‘designed to prevent fraudulent and manipulative acts and practices, to promote just and equitable principles of trade,’ and ‘to protect investors and the public interest.’”

The May 20 notice revealed that the commission still needed convincing over the safety of the Bitcoin market, especially regarding share manipulation, a worry that has been consistent throughout the crypto ETF saga. Even at this relatively late stage of the deliberation process, the SEC still sought comments about the actual size of the Bitcoin spot market and how Bitcoin price formation occurs.

Although the numerous delays from the SEC may seem like consistent stonewalling, other areas of the U.S. government are demonstrating a more accepting approach to cryptocurrencies.

Mainstream interest in the crypto world skyrocketed when Facebook announced its intention to launch its own digital token, Libra. The renewed curiosity in cryptocurrency was not confined to investors alone, as on July 30, the U.S. Senate Committee on Banking, Housing and Urban Affairs held a regulatory hearing on cryptocurrencies.

Although the hearing largely focused on Libra, Republican Sen. Mike Crapo from Idaho gave several encouraging comments about prospects for cryptocurrencies in the U.S. In his opening statement, Crapo emphasized the importance of technological innovation and the need for America to be ahead of the curve, saying: “It seems to me that digital technology innovations are inevitable, could be beneficial, and I believe that the U.S. should lead in developing these innovations and what the rules of the road should be.” Crapo also implied that an outright ban on cryptocurrency by the U.S. could be impossible:

SEC Chairman Jay Clayton gave a rare insight into the thought process of the regulatory body in a June 6 interview with CNBC, in which he expressed that the regulator needs both to accustom itself to dealing with cryptocurrency and to assuage concerns over market manipulation.

When pressed on ETFs, Clayton mentioned that the commission was working on making them a possibility for investors in the U.S. Despite his initially promising comments, Clayton underlined the need for security in regulated markets and the need to make sure crypto ETFs will not compromise the strictly regulated environment:

“We’re engaging on this, but there are a couple of things about it that we need to feel comfortable with. The first is custody: custody is a long-standing requirement in our markets, and if you say you have something you really have it.”

Building on the need for a robust, safe and regulated investment environment, Clayton said that the commission would take no risks on opportunities for market manipulation:

“The other thing that is important is […] we have sophisticated rules and surveillance to ensure that people are not manipulating the stock market, those cryptocurrency markets by large do not have that; And we’re working hard to see if we can get there, but I’m not just going to flip a switch and say this is just like stocks and bonds, because it’s not.”

Although he is the chairman of the commission, Clayton’s views are not indicative of the SEC board as a whole. Hester Pierce, an SEC commissioner dubbed “Crypto Mom” due to her open-minded approach to digital currencies, advocated for a less hesitant approach toward ETFs just three days before Clayton’s own comments in early June.

Not known for mincing her words, Pierce said that regulatory caution was standing in the way of a product that could be of use to investors, stating that the SEC is “still smothering ETFs with personalised attention as if they were infants.”

Pierce is also renowned for her criticism of the decision to reject the Winklevoss twins’ 2016 Bitcoin-based ETF application, arguing that an ETF would encourage institutional investment in the cryptocurrency market.

Despite her criticism regarding the sluggish decision-making of the SEC, Pierce told investors in December 2018 that ETF approval could potentially be a long time coming: “Definitely possible could be 20 years from now or it could be tomorrow. Don’t hold your breath. The SEC took a long time to establish Finhub.”

Despite the uncertainty surrounding regulatory approval, heads of both VanEck and Bitwise Asset Management are enthusiastic about the prospects for their respective applications. Speaking to Cointelegraph in May 2019, VanEck’s Gabor Gurbacs said that Bitcoin volatility was unlikely to have any impact on the outcome of the SEC’s decision. According to Gurbacs, Bitcoin is already held by millions of U.S. citizens and a regulated ETF would only serve to better protect those investors:

“The current rise and decline in Bitcoin price have no barring on the prospects of an ETF. Millions of Americans hold Bitcoin on an exchange, in OTC products and other forms. Bitcoin is already mainstream. An ETF would add extra customer protections and liquidity as highlighted earlier.”

Gurbacs further emphasized his belief that ETFs would be an improvement for investor protection over existing investment vehicles:

Bitwise CEO Hunter Horsley said he expected the SEC to approve crypto ETFs. Speaking to Bloomberg on Aug. 15, Horsley commented that the relative openness of the SEC in explaining the justifications for its delays — along with the details comments surrounding its concerns — indicated that the commission was taking the application seriously.

Speaking together with Horsley, Bitwise’s head of research, Matt Hougan, commented that there has been a great deal of progress across the crypto sector as a whole. Hougan cited the entrance of trading firm Susquehanna, along with improved arbitrage and new spreads.

Hougan also commented that the watershed moment for ETFs is a green light from U.S. regulators. The director also speculated that an approval could open up cryptocurrency to a greater segment of U.S. wealth, saying: “A key aspect to a Bitcoin ETF in the U.S. is that it unlocks the financial advisor marketplace. So far crypto has focused mostly on retail investors […] or institutional investors.”