As the global investor community starts to become increasingly aware of what crypto has to offer, it appears as though this burgeoning asset class is becoming more and more accepted. This is probably best highlighted by the fact that after experiencing bearish conditions all through 2018 (with Bitcoin even stooping at one point to around the $3K mark), the digital currency market as a whole was able to swiftly regain its former momentum and make an impressive comeback.

Since 2016, a number of countries have either banned digital currencies altogether (such as China, Pakistan and Egypt) or have placed various legal impositions on the asset class (thereby making it quite difficult for people to facilitate their daily monetary transactions using these currencies).

Other states around the world have an open mind toward crypto and are currently looking to amend the way in which they regulate Bitcoin and its contemporaries in order to nurture the industry while minimizing issues related to tax evasion and money laundering.

Furthermore, members of the G-7 (i.e., France, Japan, Canada, Italy, Germany, the United Kingdom and the United States) along with Australia and Singapore are reportedly in the process of creating a new crypto system that can help collect and share personal data associated with individuals who regularly make use of cryptocurrencies.

This new system will allegedly have its digital foundations laid by the end of 2020 and will be up and running a few years following that. Per a recent statement issued by the G-7, once the aforementioned platform is deployed, it will be managed exclusively by firms operating within the private sector.

Cryptocurrency regulations around the world

Here are the legal frameworks employed by various countries to either foster or curb the use of this ever-evolving asset class. Below is the map outlining the countries that have made an official outline of their stance toward crypto. 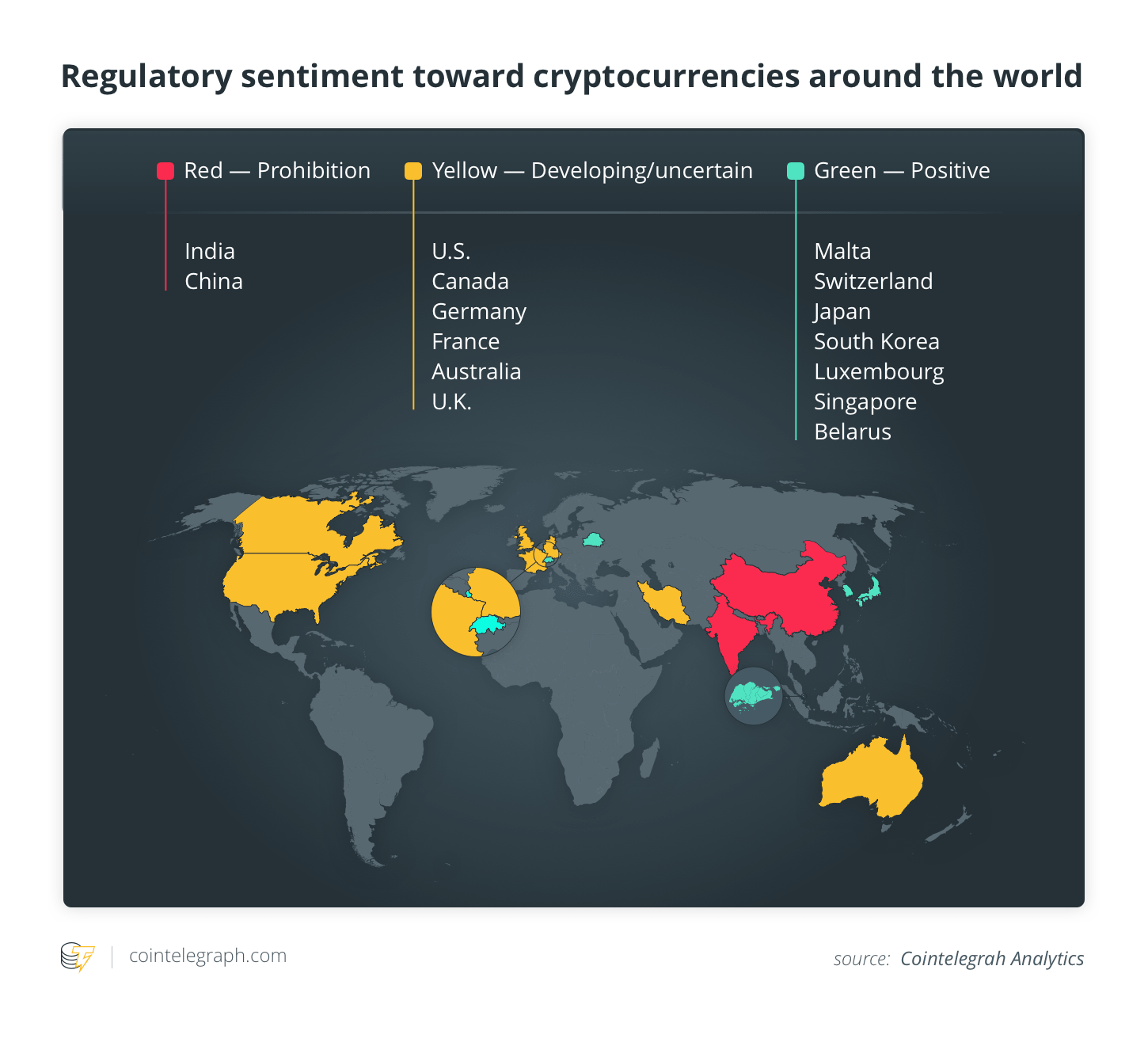 Countries that take up the middle ground:

The U.S. is undoubtedly one of the global leaders when it comes to crypto adoption and use. As things stand, investors have the option of purchasing not only Bitcoin but over 45 other digital assets across the country. The U.S. Financial Crimes Enforcement Network, or FinCEN, has classified cryptocurrency exchanges as being “money transmitters” and are therefore bound by certain niche laws. In a similar vein, the IRS too has classified crypto assets as being property with value — and thus are taxable commodities.

Another country that is home to a large number of established crypto startups and business ventures is Canada. The global powerhouse boasts of two different cities that are considered to be Bitcoin hubs (i.e., Vancouver and Toronto) and makes use of its existing Anti-Money Laundering (AML) and counter-terrorist financing laws to govern this relatively young asset class.

The U.K. is widely considered to be a global leader when it comes to crypto adoption and innovation. And while digital currencies are not banned across the region, they are still not considered to be legal tender. Also worth mentioning is the fact that no value-added tax, or VAT, is applicable on the purchase of various cryptocurrencies across the U.K. Rather, a surcharge is applicable on goods or services that are acquired in exchange for Bitcoin or other similar crypto assets.

The Reserve Bank of Australia seems to have an open mind toward the crypto industry — with the regulatory body stating that it does not prevent people from making use of digital currencies. If that wasn’t enough, back in 2017, the Australian government declared that Bitcoin would be treated like regular money and will no longer be subject to double taxation.

While the regulatory status of crypto is still quite murky in the region, France recently passed a bill that will see a new legal framework established to govern cryptocurrency operations — such as initial coin offerings (ICOs) — across the nation.

The German Federal Financial Supervisory Authority (BaFin) classifies cryptocurrencies as being “units of account” that can be used for payment purposes. However, individuals/firms indulging in token purchases (for commercial purposes) need to obtain authorization from the regulatory body in advance. Lastly, BaFin prescribes a case-by-case assessment for firm’s looking to conduct an ICO — thereby indicating that it has an open mind toward such nascent fundraising methods.

A strong stance to forbid:

Early last year, China issued an umbrella ban on any crypto activities taking place within its borders. Additionally, there is also an access ban that has been placed on all local/international crypto exchange platforms by the government. According to Zhou Xiaochuan, ex-governor of the People’s Bank of China, local financial institutions have been instructed by regulators that digital currencies should not be recognized as tools for retail payments.

Related: Chinese National Cryptocurrency Turns Out Not Being an Actual Crypto

The South Asian country seems to have adopted quite a hostile stance toward the crypto industry at large — especially over the last year and a half. For example, India’s central banking authority, the Reserve Bank of India, issued a circular in 2018 advising all private banks to refrain from processing any crypto-related transactions.

The Swiss government has remained open to the idea of crypto/blockchain from the very start. For example, the local regime provides a lot of financial impetus (such as low tax rates, tax exemptions) to crypto startups looking to set up their operations.

The small island nation does not have any predefined laws that directly tackle Bitcoin and other digital assets. However, a couple of years back, the country’s prime minister, Joseph Muscat, brought into effect an economic strategy that was designed to help lure more investments to Malta from all over the globe.

Related: Safe Space: A Guide to Special Economic Zones for Crypto, From China to Switzerland

Additionally, due to Malta’s relaxed tax laws, a number of big name crypto firms (including Binance) have set up shop in the country (primarily to bypass some of the legal hassles that crypto businesses encounter throughout most of Europe’s major nations).

This tiny European country houses one of the biggest cryptocurrency exchange platforms — Bitstamp — within its borders. In terms of how cryptocurrencies are defined, the local government views them as “intangible assets” that are not subject to income tax until they are exchanged for fiat. Additionally, all crypto-related transactions are exempt from VAT within Luxembourg.

The Asian powerhouse is known for its business-friendly, low-tax regulatory framework. In recent times, the Singaporean government has signed a number of laws that are designed to allow crypto businesses to flourish within the region.

Per a decree passed by Alexander Lukashenko — the president of the Republic of Belarus — local residents have the right to buy/sell crypto assets as well as create their very own digital currencies. Not only that, the decree also allows crypto enthusiasts to indulge in activities such as:

In addition to all this, the government has exempt owners from paying any taxes on their crypto holdings till Jan. 1, 2023.

Some countries are ahead of the curve

While some countries are still struggling to devise economic frameworks that are inclusive of digital assets, there are also those nations that already make use of systems that require crypto service providers to be licensed by relevant local regulatory bodies.

In Japan, all cryptocurrency trading platforms need to be registered with the nation’s Financial Services Agency. Nineteen businesses have already obtained the necessary licenses required to commence their operations, whereas at least 110 more firms have expressed interest in registering for the same.

This East Asian country is another example, with the Financial Intelligence Unit (FIU) recently unveiling its plans to regulate local crypto exchanges by bringing them under a unified administrative umbrella. Also, South Korea administers its crypto industry by using a “real-name system,” meaning that any crypto user wanting to withdraw or deposit Korean won must be in possession of a real-name-verified account at the bank providing this service to the exchange. As things stand, only Bithumb, Upbit, Coinone and Korbit are providing the aforementioned services for their users.