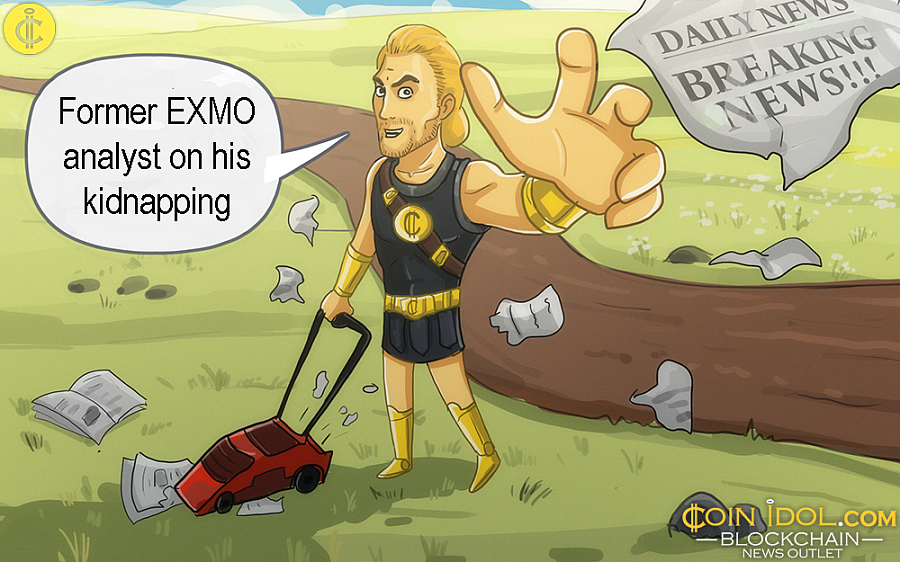 In late 2017, the lead analyst of cryptocurrency exchange EXMO, Pavel Lerner, was kidnapped in Ukraine. On December 26th, men wearing dark-colored clothes and balaclavas forced him into a car and drove away. Lerner resurfaced only three days later, having paid a ransom to the kidnappers.

Mr. Lerner left Ukraine but kept on working in the cryptoindustry. Now he is engaged in quantum analytics at
BitSonar.

Since the kidnapping, Mr. Lerner has kept a low profile. However, the Russian-language publication ForkLog managed to
interview him recently.

This is the full authorized translation of the interview.

ForkLog: Last winter, we were watching the news on your kidnapping closely. There were rumors you had been severely injured. Is it true?

Pavel Lerner: I wasn’t severely injured. The handcuffs left some fractures in my radial bones, though, and my wrists hurt sometimes. For a few months after the kidnapping I had a hard time typing things so I couldn’t do my main job, which is coding and analyzing the market.

My biggest trauma is psychological. Such things aren’t normal. It’s good I had friends and relatives by my side. They helped me switch my mind off that story.

FL: How are you doing now?

Pavel Lerner: Much better. My wounds have healed. I just try to not remember the kidnapping and move on with my life.

FL: Did you make any conclusions from that traumatic experience?

Pavel Lerner: After the kidnapping I started thinking much more about my personal safety. And I advise that you do, too. There were many articles in the media back then, so the investigation was run by some influential officials in Kyiv. When the kidnappers set me free, or, more accurately, threw me out of the car, I had to speak with the Ukrainian police almost all the time. The police acted professionally. The investigation is still underway, though I don’t think they’ll find the culprits.

FL: Some publications suggested that the Security Service of Ukraine (SBU) was involved in the abduction. Is it true?

Pavel Lerner: I heard something like that but I think it’s just mud slinging. It’s likely that the rumors started because my kidnapping almost coincided with the situation with ForkLog’s founder. A few days before my kidnapping, the SBU raided his offices and took his money.

I think the kidnappers were regular bandits. I base my opinion on their behavior: the SBU would have worked more professionally. The investigators showed me some darknet posts: find us millionaires, and we’ll pay you for info. There were around 20 names on the list. I wasn’t even the first one to be kidnapped.

Nobody’s safe from instances like that, especially in countries with low level of personal safety. Cryptocurrency millionaires often don’t even realize somebody may just take their money away. In our environment, people don’t kidnap one another. We don’t deal with racketeers so we don’t have bodyguards.

FL: In your opinion, what were the motives of the criminals?

Pavel Lerner: Greed for gain. They wanted me to give all my bitcoins to them. Apparently, they weren’t good at it as they requested 10,000 BTC as ransom. Back then, 1 BTC was worth around $20,000.

FL: So how much was the ransom in the end?

FL: Do you want them punished? Is there any news?

Pavel Lerner: I would like them to be brought to justice. As far as I know, the investigation is still going on, and there is a list of suspects. Somebody was even arrested, but I don’t think they’ll find the kingpin.

It’s most likely that an international crime network is involved here. The kidnappers could come from another country just to do the “job.” For instance, if they came from Russia, the Ukrainian police won’t be able to have them delivered to Kyiv because of political tensions with Russia.

FL: What piece of advice could you give to cryptocurrency owners who wish for greater personal security?

Pavel Lerner: Please remember that anyone can be abducted and robbed. It’s just a question of price and time. Your objective is to make it clear to all criminals: it’s easier to rob twenty shops and drive away on a fire truck than to abduct you.

If you live in the former USSR, leave it. A country in the EU or Asia with high security level will be much better. Consider any country where you feel safe both personally and legally.

Hire good lawyers and don’t grudge money. If you have problems with criminals or authorities, they will act. They have way more useful connections than you, your friends, or your relatives.

Join the local community. Legal and financial assistance is easier to find in this case. When like-minded people join their efforts and build systemic processes, there is a brand new level of service.

Finally, have a tracking device on you. It can be a bracelet, a watch, or a ring. It will send your location to your family or your lawyers if anything happens. I saw rings with a secret panic button that my American colleagues wore. If someone takes it off and doesn’t push the button for a while, it will send a distress signal.

We use those methods at
BitSonar while working with VIP investors. People with big deposits have to feel safe. That way they will be able to create something useful instead of doing broken field runs across town.

FL: Now that everything seems to be fine, you work at BitSonar. What’s that project about?

Pavel Lerner: The project is engaged in quantum analytics. Using software, we analyze data for big periods of time, find matches, build hypotheses and test them. If the hypothesis is proven right, we make it a quantum strategy. BitSonar doesn’t work exclusively with cryptocurrencies. It’s not just a project but a whole philosophy for the new world. For now I cannot disclose much detail but I can say that BitSonar plans to solve problems with personal freedom, security, movements, and asset management.

FL: What is your role in the project?

Pavel Lerner: I work with algorithmic trading with cryptocurrencies. Mathematicians and physicists are more valuable for the project than traders. It’s very difficult to find a good quantum analyst. More often we find young mathematicians or physicists and teach them.

FL: How did you start your work with BitSonar?

Pavel Lerner: BitSonar asked me to assess their algorithmic trading part. I liked their system, the team, and the partners. We have similar views on modern freedoms and the place cryptocurrencies have therein. I think that’s why they offered me to lead the algorithmic trading department.

FL: How did you first join the cryptoindustry? How did it all start for you?

Pavel Lerner: I graduated from the Physics and Mathematics Department at the Kursk State University in Russia. There I defended a dissertation. Then I was a professor at the chair of informational security. I worked with all kinds of encryption there were, and eventually stumbled upon cryptocurrencies.

I came to own my first cryptocurrency back in 2013. It was Litecoin. I was mining it with CPU and graphic cards when the computer classroom was empty. Once my friend and I spent 17,000 LTC to go to Egypt. He still asks me why haven’t I stopped him.

Then I was involved in the creation of a cryptocurrency exchange. The founders of the project trusted me to hire the team. I was leading the development process. We spent 14 to 16 months writing the code and testing it.

The exchange was first called Exmine, then it was renamed EXMO. It was hard to work during its first year. There were 8 to 10 people, and everyone had several roles at once. I was assigned the manager of the exchange. I was a consultant, selected cryptocurrencies, set up the matching mechanism, and implemented algorithmic technologies. When we implemented the work with blotters, own data, and other exchanges, the profitability of EXMO increased several times.

There weren’t many altcoins back then. Some don’t even remember Dash was called Darkcoin those days. Those were good times! Back then I worked only with the exchange. As time went, I got other libertarian projects. They used cryptocurrency as a means of investment, storage, and management of assets. I also managed some minor exchanges in an attempt to accelerate and streamline the acceptance of cryptocurrencies by society. I wanted people to exchange crypto for fiat anywhere in the world.

FL: BitSonar seems interesting too. The company is incorporated in Estonia, its developers reside in Malaysia, and the CEO was never involved in cryptocurrency-related projects before. How does the team actually work?

Pavel Lerner:
BitSonar created a community of professionals and investors that enhance their financial literacy and independence. The company’s structure reflects our philosophy. We got rid of borders imposed on the society. We chose Estonia due to their crypto-friendly legislation, however, cryptocurrencies know no boundaries. In this area, efficiency doesn’t depend on time spent in office or Monday meetings.

BitSonar do their best to expand freedoms of their employees. Analysts, financists, and a few coders are in Spain. The Malaysia-based developers who created the first BitSonar algorithms are always travelling. They need but a laptop and internet access to work. We also work with specialists from Russia, Ukraine, and the United States.

The project’s CEO Marius Ziubka is an incredibly energetic person and an amazing manager. He brings the employees scattered around the world together. Thanks to him, the developers, analysts, marketing specialists, and brand ambassadors work like a machine.

FL: Who would need the project’s services?

Pavel Lerner: First of all, it’s holders. Many of them bought bitcoin for 17 or 18 thousand dollars, so the cryptosummer has not come to them yet. Such people can find no use for their bitcoins or Ethereum. BitSonar will increase the number of coins such people own with robots, neural networks, and quantum strategies. We work with highly liquid platforms like BitMEX, Binance, and Huobi.

Another category of potential customers is investors with high risk appetite and users of trading bots. They have to know which strategies are efficient right here and right now. Many tools just don’t work on classical markets due to slow servers and regulation. However, they still find their use in cryptotrading. For instance, you won’t be able to profit from arbitraging on classical markets but it is a steadily profitable strategy for cryptomarkets.

Most importantly, the world of cryptocurrencies is continuously growing and changing. Analysts, coders, and traders should join their efforts to develop hypotheses and gain profits.

Anchorage Chose South Dakota for Its Crypto Custody – Here’s Why