The anonymous analyst who has been spot on with his predictions regarding Bitcoin’s price so far continues to amaze. As we enter the second half of July, his current prediction appears to be more and more plausible.

Bitcoin’s price has been the subject of countless predictions over the past couple of years, being as volatile as it is. One of them, however, seems to stand out.

As CryptoPotato reported back in June, an anonymous analyst who correctly predicted that the price would hit $5,300 in April also foresaw that Bitcoin’s price in July would be around $9,200. 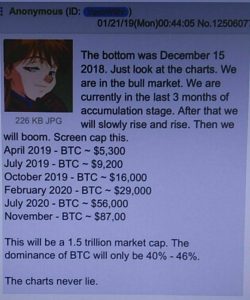 As it turned out, Bitcoin ended the month trading at around $5,300, exactly as he’d predicted. The price has already hit $9,300 in July, but if we’re considering the end-of-month price, he might still be right. July has been a tumultuous month for the cryptocurrency market so far.

Just about a week ago, Bitcoin was trading at around $13,000 before marking a sharp correction which brought its price down to its current level of $9,800. If the downward trend continues, it won’t be much of a surprise if Bitcoin closes the month trading around the predicted price of $9,200.

The next target predicted by the analyst is $16,000 in October. Bitcoin’s price would have to go up about 63 percent in the next two months in order for him to be correct on that count.

If history is any indicator, this might be completely possible. Back at the beginning of May, Bitcoin was trading at around $5,300, which is about 84% less than its current price. In other words, the cryptocurrency has proven that growth of that kind is more than possible.

However, the sharp decline of the past week has got a lot of people wondering if the bullish trend has reversed.

From a technical perspective, there are a few key levels to watch. As we reported yesterday, important support levels include $9,000, $8,800, and $8,500. Bitcoin has recovered a bit since yesterday, breaching the resistance at $9,600, and is currently trading slightly above the resistance at $9,800. A positive signal would be for Bitcoin to break above the important psychological and technical barrier at $10,000 and reclaim it once again. Further up, we can see resistance at $10,300, $10,600, and $11,000.

Forbes Called The Next Potential “Unicorn” In The Cryptocurrency Space