This week, the cryptocurrency market was painted in red. After the celebration of the gains made in recent weeks, we saw a correction which slightly cooled the market off. However, this is not a crash but rather a healthy correction which brought relative stability to the market. Bitcoin’s price still keeps its head above five digits which is substantially higher than the beginning of the year.

The altcoin market is also cooling off and it seems that alts continue to free fall, especially against Bitcoin. Some of them are already reaching their all-time lows against BTC, the dominance of which continues to grow over the 65% threshold.

However, despite the declining prices, the regulatory sector continues to warm up. It seems that Facebook’s cryptocurrency project, Libra, keeps on generating waves and it prompts various legislators to clarify their positions on the matter. Meanwhile, the Secretary of the US Treasury, Steven Mnuchin, said that the relevant authorities are already dealing with the matter and that they are expected to issue clarifications and enforcement in order to regulate the industry and to remove risks as much as they can.

In conclusion, we saw a week of mixed trends full of corrections and uncertainty which has already become the hallmark of the market. Overall, we can say that 2019 has so far been a positive year for Bitcoin, especially in light of the great interest in Libra, as well as the attempts to compare it to Bitcoin which gained a lot of attention. Looking at altcoins, though, the situation is less positive. However, the declines seem to have slowed down and in the meantime, the support holds up.

So, are we going to see another altcoin season in 2019? If Bitcoin keeps its relative stability, traders would feel much more comfortable and there is a good chance this will wake up the Altcoin market. But after a particularly turbulent year, it is difficult to assess the direction of the trend and we’d have to wait for the dust to sink in so that we can determine the future trends. 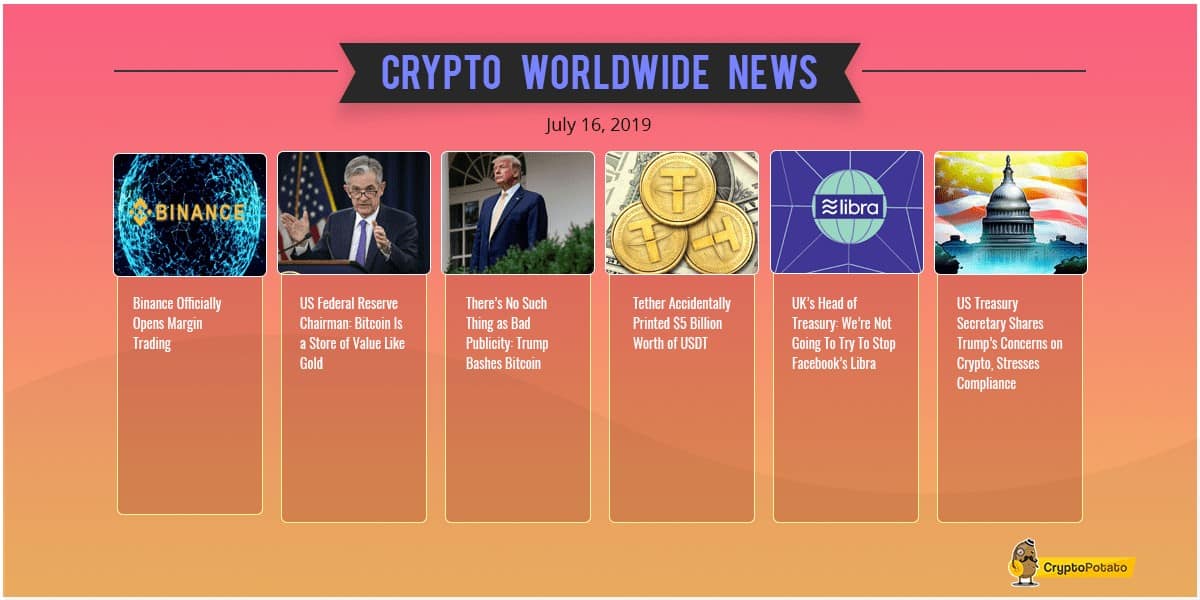 US Federal Reserve Chairman: Bitcoin Is a Store of Value Like Gold. In what appears to be a massive validation for Bitcoin, the Chairman of the US Federal Reserve has acknowledged that it’s a “store of value…, like gold.” Mr. Powell also outlined that it might be possible that the widespread adoption of cryptocurrencies diminishes or removes the need for a reserve currency.

Tether Accidentally Printed $5 Billion Worth of USDT. Popular stable coin issuer, Tether, has mistakenly printed $5 billion worth of USDT. All tokens were consequently burned. However, the price of Bitcoin reacted immediately, decreasing by about 3.5% following the news.

UK’s Head of Treasury: We’re Not Going To Try To Stop Facebook’s Libra. Philip Hammond, the Head of UK’s Treasury, confirmed that the country doesn’t plan to stop Facebook’s Libra cryptocurrency but rather to regulate it. He said that if it’s done properly, Libra could be “transformative in operating systems.”

US Treasury Secretary Shares Trump’s Concerns on Crypto, Stresses Compliance. The Secretary of the United States’ Treasury, Steven Mnuchin, shared President Trump’s concerns on the use of cryptocurrencies to facilitate illicit activity. He also emphasized on the need of enforcing FinCEN regulations when it comes to organizations which are dealing with digital currencies.