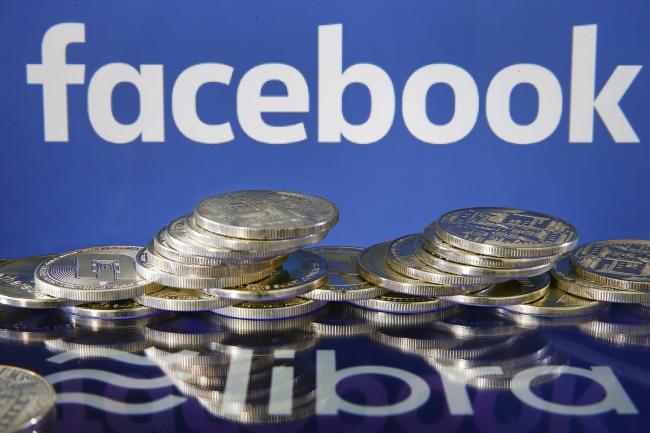 © Bloomberg. PARIS, FRANCE – JULY 08: In this photo illustration, a visual representation of digital cryptocurrency coins sit on display in front of Libra and Facebook logos on July 08, 2019 in Paris, France. Since the announcement of its creation a few days ago, the virtual currency of Facebook Libra fascinates as much as it worries. Libra, Facebook’s cryptocurrency project, worries US representatives and senators: they ask the social network to pause its implementation, the time to investigate Libra and carry out impact studies. The Congress plans to release its findings on July 17, 2019. (Photo by Chesnot/Getty Images) Photographer: Chesnot/Getty Images Europe

(Bloomberg) — It’s long seemed that nothing could unite President Donald Trump and Democrats on Capitol Hill. Then Facebook Inc (NASDAQ:). decided to create a cryptocurrency.

Washington’s bipartisan distrust of the social-networking giant will be on display this week as it defends the digital-money proposal in two congressional hearings. In a sign that the testimony is likely to be an ordeal for Facebook, Trump took to Twitter on Thursday to bash the effort.

The presidential lashing was just the latest setback for Facebook, which rolled out its plan for a token called Libra in June –- a move that many policy makers called hubristic and ill-timed, considering the political turmoil that continues to swirl around the company. Last week, Facebook agreed to pay about $5 billion in a record privacy settlement with the Federal Trade Commission.

Facebook’s traditional pre-hearing courtesy visits to discuss Libra in the House and Senate aren’t going well, according to interviews with lawmakers and congressional staff. While the company has taken pains to describe its initiative in utopian and futuristic terms, lawmakers have been more interested in data security, the company’s awesome market power, and why it decided to base the operation outside the U.S.

“Look at their arrogance, look at their role in the 2016 presidential campaign, look at the fact that they’ve rarely shown any contrition on much of anything,’’ Senator Sherrod Brown of Ohio, the Banking Committee’s top Democrat, said in an interview. “There’s going to be a group of us that’s going to demand some real information.’’

Complaints about Libra haven’t just come from politicians. Trump-appointed Federal Reserve Chairman Jerome Powell told lawmakers last week he has “serious concerns’’ about the token and cast doubt on Facebook’s timeline for launching it by next year. He also warned that the U.S. regulatory system may not be equipped to handle the enormous digital payment system envisioned by Facebook, which has more than 2 billion users.

Democrats, including Financial Services Committee Chairwoman Maxine Waters of California, have already demanded that the company put its plans on hold while Congress investigates. Republicans, though less vocal, also haven’t been supportive.

The controversy around the project, however unwanted by Facebook, nevertheless highlights the company’s power to dominate policy debates and, to some extent, set the agenda in Washington. Until Facebook jumped in a few weeks ago, cryptocurrency was more of a fringe issue that attracted an unusual crowd of libertarians, speculators and blockchain geeks. Many in Congress were uninterested.

The stakes are high for both Facebook and the broader digital coin industry as David Marcus, a top executive at the company, prepares to testify before the Senate Banking Committee on Tuesday and the House Financial Services Committee on Wednesday.

When asked for comment, a company spokeswoman pointed Bloomberg to a blog post Marcus published after the plan was unveiled, and to letters he wrote to lawmakers where he said the company was eager to work with regulators and governments. “We can’t do this alone,” Marcus wrote.

Marcus, whose preparation has included a mock hearing, is expected to address a number of points in his testimony. He’s likely to stress that while Facebook has spearheaded the Libra project, it’s not acting alone. The company has said that it envisions a governing body that would include at least 100 organizations. There are currently 28 listed as founders for the Libra Association, although none has paid the $10 million entrance fee.

Marcus is also likely to try to convince lawmakers that the company is open to regulation and is prepared to discuss how Libra’s oversight could fit into existing laws. He may warn that if the U.S. squashes Facebook’s plan, other countries, like China, could step in and build their own tokens without input from Washington. The People’s Bank of China has already said it’s developing a digital currency.

Facebook has been making similar arguments in briefings with lawmakers and congressional aides, according to interviews. The major companies that have partnered with Facebook on the project, including Mastercard Inc (NYSE:)., Visa Inc (NYSE:). and Uber Technologies (NYSE:) Inc., have been mostly silent about Libra and largely absent from the lobbying effort.

Few details on Libra have been disclosed beyond a 12-page white paper issued in June, which said Libra will be built on a new blockchain infrastructure accessible from anywhere in the world. Facebook and its partners have set up a non-profit organization in Switzerland to oversee the payment network. The token will be backed by a reserve of bank deposits and short-term government securities.

Trump, in his tweets last week, said he’s “not a fan” of digital coins in general because of their potential use in criminal activity. As for Libra, Trump wrote that it “will have little standing or dependability.” He added that if Facebook really wanted to get into finance it should become a bank — and be regulated like one.

Though the price of and some other cryptocurrencies has gained on the surge in mainstream interest in the concept, a number of competing digital coin companies are distancing themselves from Facebook. Some industry groups are also conducting briefings for congressional staff, pointing out that Facebook’s plan is light on details and not necessarily representative of all tokens.

Libra is more of a “company-issued asset” rather than than a true cyptocurrency like Bitcoin, said Coin Center Executive Director Jerry Brito, who’s been involved in some of the meetings on Capitol Hill. A key complaint among purists has been that Libra isn’t decentralized. “There is no company that issues Bitcoin,” Brito added.

Blockchain Association Director Kristin Smith, whose group represents several large crypto companies, said she’s generally not opposed to Facebook’s entrance into the market. She acknowledged, however, that there’s a lot of potential risk.

“It’s mixed,” she said. “We certainly don’t want the whole industry to become associated with some of the issues that Facebook has had as a company in the past.’’

Along with complaints that it allowed Russia to hijack its platform to support Trump’s election campaign, the company has also drawn fire for numerous consumer privacy breaches. The $5 billion FTC settlement, which still needs final approval from the U.S. Department of Justice, resolves an investigation stemming from Facebook’s involvement with Trump campaign consultant Cambridge Analytica.

Smith attended a news conference at the Capitol last week with four moderate Democratic and Republican members of the House who are strongly supportive of the financial technology industry. They, too, weren’t leaping to endorse the Libra project.

Representative Josh Gottheimer, a New Jersey Democrat who sits on the financial services panel, said at the event that he hopes the focus on Facebook’s proposal will prompt lawmakers to consider legislation that clarifies the regulatory landscape. Some of the laws governing digital currency, he noted, go back to the 1930s.

“We have to have the conversation,’’ he said. “I don’t want to lose the jobs and innovation elsewhere.’’

Gottheimer plans to strike a similar theme at the Facebook hearing this week, but it’s not clear how many other members of the House panel will be interested in the finer details of Libra or digital payments.

Some lawmakers predicted that the hearing may quickly devolve into a series of anti-Facebook rants, on issues like fake news in the 2016 campaign, data protection, the company’s market dominance and the FTC settlement. Those topics are often easier to understand for some members of Congress who are decidedly not techies.

In what may be a harbinger, Financial Services Committee member David Scott, a Georgia Democrat, mistakenly referred to the digital token Libra as Libor, an interbank lending rate, while questioning the Powell last week. The Fed chief didn’t bother to correct him.

Bitcoin drops more than 10% as scrutiny of cryptocurrencies grows