The views and opinions expressed here are solely those of the author and do not necessarily reflect the views of Cointelegraph. Every investment and trading move involves risk, you should conduct your own research when making a decision.

The total market capitalization of cryptocurrencies has dipped below $300 billion from over $380 billion on June 26. This shows that the sharp recovery from the lows is taking a breather. While the unveiling of Facebook’s Libra project was a major boost to cryptocurrencies, the recent opposition to it from various quarters has led to profit booking.

While a number of altcoins have hit a rough patch and have given up the majority of their gains accrued over the past few weeks, Bitcoin is still looking strong. Hence, we view this fall as a buying opportunity. However, we do not suggest buying when the trend is down. Traders can wait for the price to stop falling and form a short-term bottom before initiating long positions.

The rally after the current corrective phase will clearly separate the winners from the losers. We suggest traders look to buy cryptocurrencies that have held above their strong supports and are quick to bounce back from the fall. Let’s see if we spot any trading opportunities in the top five performers of the past seven days.

A number of big names spoke against Bitcoin (BTC) in the past week. The most important statement was from United States president Donald Trump who said that he was not a fan of Bitcoin and other cryptocurrencies as he believed that it was not money, highly volatile and its value was “based on thin air.” However, the crypto community took this statement as a huge positive because it gave wide publicity to the asset class and showed that it has become so important that the U.S. president would comment on it.

The Fed Chairman Jerome Powell said that no one used Bitcoin for payments and it was only a “speculative store of value like gold.” The European Central Bank also voiced its opposition and said that Bitcoin was not a currency but a volatile asset, hence, it did not have any plans to add Bitcoin to its reserves.

On the other hand, Chamath Palihapitiya, CEO of VC firm Social Capital, said that Bitcoin is the best hedge against the traditional financial system. Similarly, Grayscale Bitcoin Trust showed a considerable inflow of funds. This shows that while the central banks and world leaders continue to voice their opposition to Bitcoin, it is finding a place in the portfolio of large investors. So, should traders buy now or wait for lower levels? Let’s find out.

The recovery in the BTC/USD pair hit a barrier at $13,156.96 and turned down from there. It can now correct to the first support of $9,781.81, which is the 38.2% Fibonacci retracement of the recent rally. If this support holds, it will indicate that bulls are not willing to wait for lower levels to buy, which is a positive sign. The next rally is likely to retest $13,973.50.

As the RSI is still in overbought territory, the pair might not run up in a hurry. It might consolidate for a few weeks before resuming the up-move. We will wait for the price to complete the correction and show signs of a turnaround before suggesting a trade in it.

Chain Link (Link) announced a collaboration with IoTeX on oracle research and development to provide real-world data to blockchain applications. It also tied up with Ampleforth and Neblio in the past seven days.

The sharp rally in the LINK/USD pair could not sustain above $4. In the past two weeks, the pair corrected to $2.60, which is just above the 50% Fibonacci retracement level of $2.4465. As the RSI is still deep in overbought territory, we expect the price to enter into a range for a few weeks.

Contrary to our assumption, if bears sink the digital currency below $2.4665, it can drop to $1.9671, which is the 61.80% Fibonacci retracement of the rally. A breakdown of this support will be a negative move. We suggest traders wait for the formation of a clear range before initiating long positions.

OKB is the native token of OKEx, a world-leading cryptocurrency exchange. The token offers its users opportunities to set up OKEx partner exchanges, settle trading fees, and subscribe to new token sales on the OK jumpstart platform.

The total supply of OKB is 1 billion, out of which only 300 million is in circulation and the rest has been locked up until 2022. The long-term hodlers of the token will benefit from the OKB Buy-Back & Burn Program, which will be run every 3 months. Currently, the token is operating on the ERC-20 protocol but will soon migrate to the OKChain mainnet – being developed by OKEx — which is in the final stages of testing.

OKB has been listed on Bitfinex and is attempting to partner with other exchanges to further expand the ecosystem. At press time, the token is ranked 1,870 on CoinMarketCap with a 24-hour volume of $61.7 million. Is this a good opportunity to scoop OKB before prices shoot up? Let’s look at the technical picture. 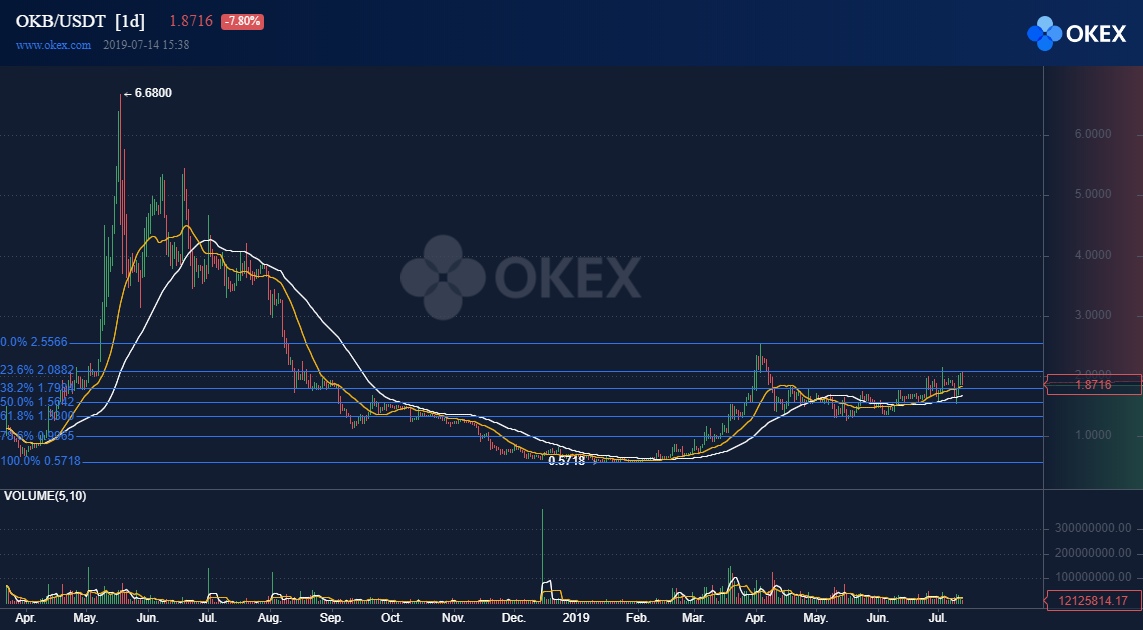 Thereafter, the pullback found support at the 61.8% Fibonacci retracement level of the up-move. It consolidated between $1.30 and $1.829 for a few days before breaking out of it. Both the moving averages are gradually sloping up, which suggests that bulls have the upper hand.

Conversely, if bears sink the price below the range, it can slump to $1.2616, which is a strong support. If this support breaks down, it will indicate advantage to bears.

Though Monero (XMR) fell over 10% in the past seven days, it was the third-best performer. It has been a consistent performer in the past few weeks. Can it keep up the momentum and move up or will it enter a corrective phase? Let’s look at the charts.

Contrary to our assumption, the rebound in the XMR/USD pair hit a wall at $108.840. The price has turned down sharply and is retesting the critical support at $81. This is a bearish sign. Both the moving averages and the horizontal support are located at this level, hence, we anticipate a strong defense by the bulls. If successful, we might see another attempt by the bulls to propel the price towards $120.

However, if the digital currency plunges below $81, it can drop to the next support at $60.147. Both the moving averages are flat and the RSI is close to the midpoint, which suggests consolidation in the short term. The traders can retain the stop loss on the long positions at $78.

The world’s leading cryptocurrency exchange Binance announced the launch of margin trading with its 2.0 platform. Though margin trading is risky, with proper risk management, it can be a boon to the experienced trader. Novices, however, should stay away from margin trading. The exchange announced support to additional pairs on its fiat-enabled trading platform in Singapore. Its research arm said that merged mining can mitigate the effects of halvings for Bitcoin and Litecoin. How does Binance Coin’s (BNB) chart look?

The BNB/USD pair continues to be strong with both the moving averages sloping up and the RSI still in the positive territory. The bulls held the first support of $28.7168 during the week, which is also a positive sign. They will now attempt a recovery from the current levels. If the support holds, the pair might remain range-bound for a few weeks.

However, if the rebound fizzles out and the pair plunges below $28.7168, it can correct to the uptrend line. The 20-week EMA is also located at this level, hence, we expect the bulls to defend this support. Traders can watch this level closely and initiate long positions on a strong bounce off it, but should stay away if this support cracks.