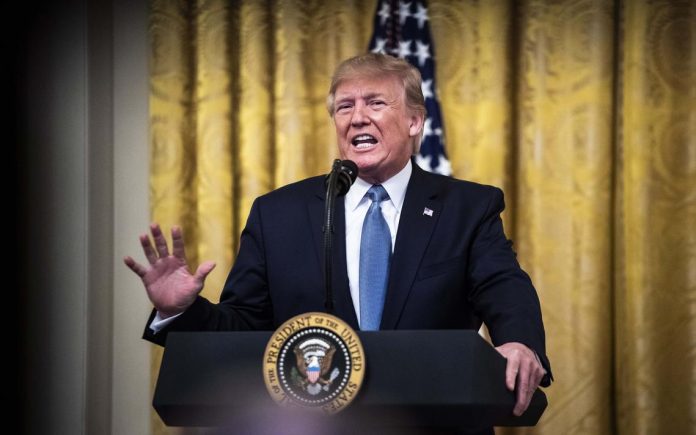 Facebook has their own digital currency. Bitcoin is trading above $11,000. Donald Trump is Tweeting about cryptocurrency. No, this isn’t a dream, it’s just another day in crypto in 20019.

Earlier this night, United States President Donald Trump shared his opinions on Bitcoin and cryptocurrency. In typical Trump fashion, his thoughts were shared as a series of Tweets from his personal Twitter account.

The Tweets spread like wildfire throughout the greater cryptocurrency community. This is the first instance of Trump acknowledging Bitcoin. As arguably the most influential person in the world, Trump’s opinions carry massive impact for supporters and speculators across the globe.

I am not a fan of Bitcoin and other Cryptocurrencies, which are not money, and whose value is highly volatile and based on thin air. Unregulated Crypto Assets can facilitate unlawful behavior, including drug trade and other illegal activity….

As might be expected from the Chief Executive, Trump’s chief concern appears to lie in protecting the dominance of the United States Dollar. His statements began with a blunt declaration that he is “not a fan” of cryptocurrencies as a whole.

With over 8,000 Tweets as direct responses in the following hours, Trump’s words clearly sparked a lot of reaction from accounts across the globe. Many of the responses highlighted the hypocrisy of Trump’s condemnation of crypto for it’s basis “on thin air” and use for illicit purposes, when the exact same criticisms might be applicable to USD.

While these critiques are certainly frustrating, they aren’t particularly out of character or unexpected. The more pertinent message comes in the following Tweets, where Trump takes a jab at Facebook’s Libra.

…and International. We have only one real currency in the USA, and it is stronger than ever, both dependable and reliable. It is by far the most dominant currency anywhere in the World, and it will always stay that way. It is called the United States Dollar!

Trump flatly declared that Libra “will have little standing or dependability”. He continues by referencing some of the regulations and insurances a proposed currency like Facebook would require to rival the existing banks and financial institutions that deal in USD. Trump concludes by reinforcing the ideal that USD is the best and only currency across the land.

When reading between the lines, these Tweets appear exceptionally positive for the cryptocurrency space. The initial purpose of Bitcoin as introduced by Satoshi Nakamoto was to be used as a tool to arm citizens against banks and financial institutions that dominate the global population. The fact that the President of the United States sees the need to denounce such a development suggests it’s seen as a legitimate threat to the strongest currency in the world.

These sentiments extend even further onto Libra. While Bitcoin has been growing for more than a decade, Libra is a project announced just weeks ago. These Tweets come shortly after Congressmen and the chief of the Federal Reserve both urged the companies behind Libra to halt development until consent from the government is achieved.

As the popular saying goes: “First they ignore you, then they laugh at you, then they fight you, then you win.” As has been shared time and time again in the crypto space across the years, it’s becoming increasingly clear that the ‘fighting’ stage is beginning to form. Whether or not the United States government will attempt to take an active approach to inhibit and obstruct the continuation of these sovereign currencies is yet to be seen.

There’s No Such Thing as Bad Publicity: Trump Bashes Bitcoin