After Bitcoin’s meteoric rise, a small, healthy correction gave way to a continued rally in the Bitcoin market which is already painted green again.

It is important to note that Bitcoin’s fundamentals haven’t changed much, and it seems that the price has been influenced by existing industry players. That’s because it still does not appear that Bitcoin has entered an accumulation period or that new money is being felt. From past experience, new money will come in en masse only after Bitcoin has created new price highs.

Nevertheless, the discourse and interest around digital currencies has recently increased, mainly due to Facebook’s Libra announcement. While it is impossible to ignore the interest that has been created around Libra, this is not the reason why Bitcoin’s price has been rising since the beginning of 2019, and it is not certain that there are clear reasons for Bitcoin’s volatility.

In any case, the discussion around cryptocurrencies is expanding and suggests the need to improve the global monetary system, and Bitcoin has contributed to that discussion by offering an alternative system that is solidly backed, as evidenced by a mining difficulty which continues to set records.

On the other hand, the situation regarding alternative cryptocurrencies, or altcoins, is not particularly bright. Their share of the market has continued to sink in favor of Bitcoin. Egretia (EGT) is one of the few altcoins to have bucked the trend, as it has not been affected by the rise of Bitcoin. While the market is waiting for another alt season, 2019 has so far been a dark year for alts, falling to old lows against the surging Bitcoin.

In the regulatory sector, things are also moving forward, thanks to Facebook’s Libra. The company has urged regulators to make the necessary updates to the law regarding digital currencies. After the Financial Action Task Force issued guidelines last week, an update is expected from the IRS regarding taxation of the various currencies.

To summarize, the 2019 rally continues for Bitcoin, while altcoins are waiting for a season that is currently not in sight. Meanwhile, the next Bitcoin halving event approaches and the race to stockpile Bitcoin continues. Previous cross-sectional events have had a direct effect on the Bitcoin price, and for many traders this is a good reason to start accumulating (though this should not be seen as trading or investment advice). 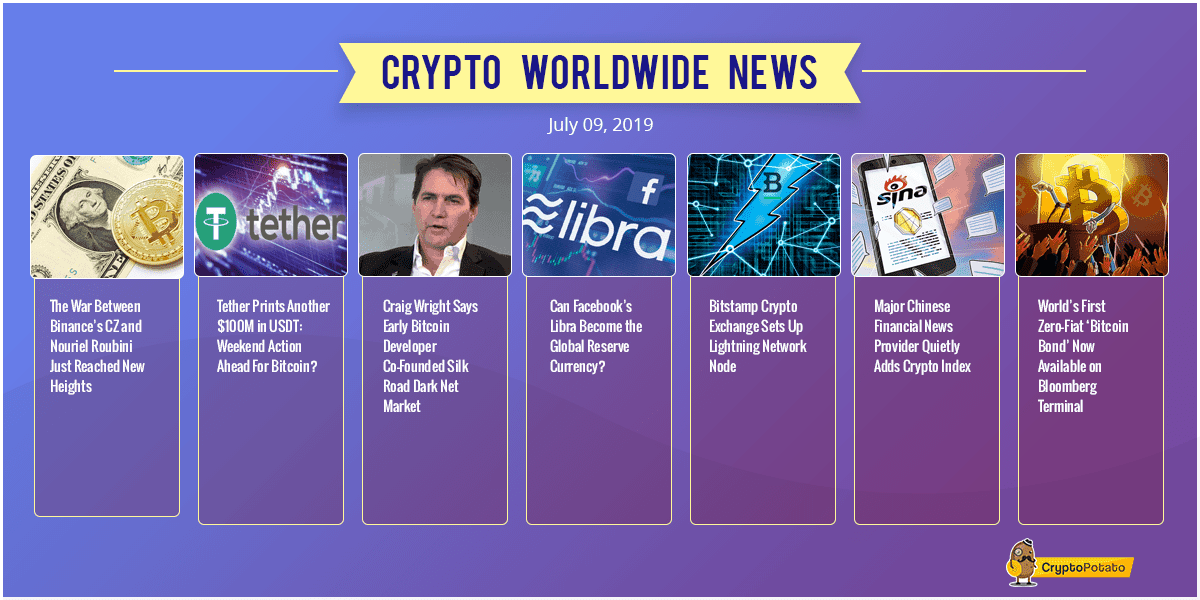 The War Between Binance’s CZ and Nouriel Roubini Just Reached New Heights. Nouriel “Dr. Doom” Roubini, who argued that cryptocurrency is a “right-wing nightmare”, called one of the most influential individuals in the space, Changpeng Zhao, a “jerk” and a “snake oil peddler.” CZ argued that it’s rather odd to call a guy a jerk because he’s building what he believes in.

Tether Prints Another $100M in USDT: Weekend Action Ahead For Bitcoin? The popular stablecoin issuer Tether printed yet another $100M worth of USDT. The tokens were minted on Ethereum’s blockchain and sent to Tether’s treasury account. This happened before this past weekend, which was rather flat for Bitcoin.

Can Facebook’s Libra Become the Global Reserve Currency? As Facebook’s Libra concept starts to grow in popularity, members of the crypto community have already come up with interesting ideas. One in particular outlines how Libra could actually become a global reserve currency.

Bitstamp Crypto Exchange Sets Up Lightning Network Node. Popular European cryptocurrency exchange Bitstamp has set up its very own Lightning Network node in order to boost the capabilities of the network. The LN is known as Bitcoin’s scaling solution as it is designed to enable fast and zero-fee transactions.

Major Chinese Financial News Provider Quietly Adds Crypto Index. Sina Finance is a finance-focused website which is owned by one of China’s major tech companies, Sina Corp. It has added a cryptocurrency index to its mobile app, which signals further adoption of digital currencies in the region.

World’s First Zero-Fiat ‘Bitcoin Bond’ Now Available on Bloomberg Terminal. Two European companies have jointly launched the world’s first genuine Bitcoin bond, as per their own terms. It contains no fiat exposure for investors and it’s readily available via the Bloomberg Terminal. It’s the first cryptocurrency product to have its own ISIN code.