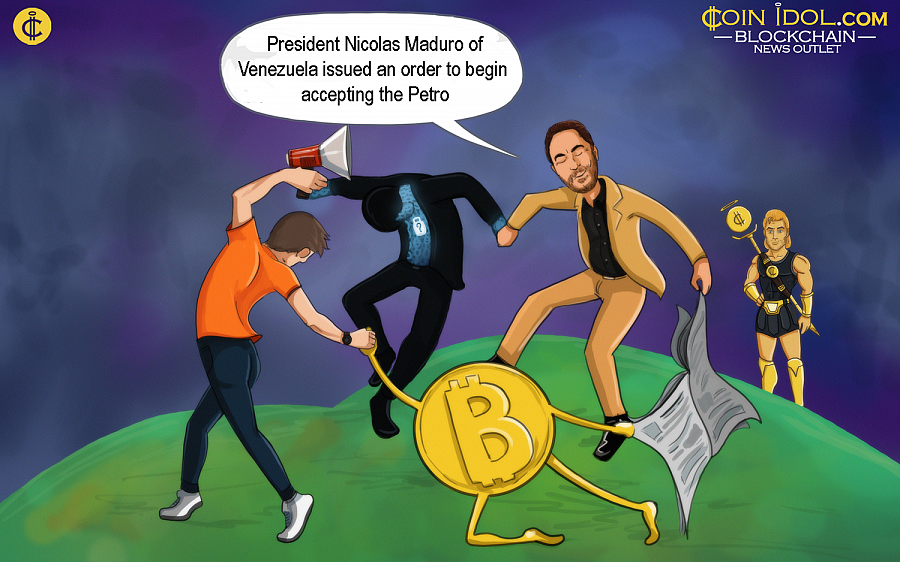 President Nicolas Maduro of Venezuela, issued an order to Banco de Venezuela (BDV), a global financial institution based in Caracas, to begin accepting the Petro (PTR), the country’s popular oil-backed digital currency. Through the Minister of Finance, the President told the country’s third market leader with a market share for deposits of more than 11.2%, to begin allowing Petro cryptocurrency in all of its functioning branches.

President Maduro tweeted that “the express order to open Petro desks in all the branches of the Bank of Venezuela.” This proclamation comes when the bank is preparing to have its 10th anniversary of the financial institution’s nationalization.

Last month, Maduro revealed that a total of $92.5 million was directly allocated to the Digital Bank of Youth and Students to help in creating a million digital currency wallets to be fully used by the Venezuelan youth. The population now waits to see whether the Banco de Venezuela will abide by the President’s demand.

As per the Head of National Digital Currency Association, José Angel Alvarez, the initiative is a nice idea that will help in boosting the country’s hybrid economy whereby the oil-backed cryptocurrency will be allowed to compete with the national fiat currency the bolivar which is currently very weak.

However, the global community treats this government-backed cryptocurrency quite ambiguously. As we previously
reported, the country has been working very hard to promote the wide use of blockchain and cryptocurrencies so as to bypass the economic sanctions and limitations imposed by the United States government, and also save the country from hyperinflation.

Also, it is remembered that President Donald Trump urged the American citizens not to use or associate with Petro cryptocurrency in order to further squeeze the economy of Venezuela. With this purpose, Venezuela sought
intervention from the World Trade Organization (WTO) to influence the situation. They were saying that trade-restrictive measures put on Petro was conflicting with the WTO’s GATS regulation.

It seems the government does its best to promote their oil-backed cryptocurrency and force people to use it. In 2018, they provided an initiative that stipulated citizens using the Petro to buy
passports. No other currency is allowed apart from it. The new migration police were also order to enforce this command and prevent refugees from escaping out of the country.

Flexa to support Litecoin payments in the U.S.