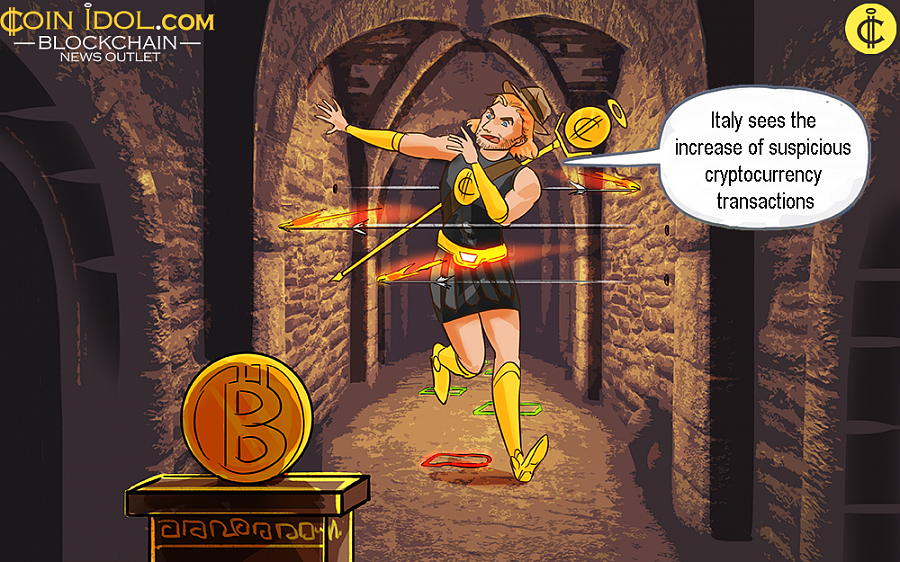 A report by the Financial Intelligence Unit (UIF) of the central Bank of Italy shows that the recycling alert on Bitcoin, Ether, Ripple and other major cryptocurrencies is greatly increasing. The report largely focused on the suspicious transactions carried out between 2017 and 2018, and found out that they soared by around 208 to 499 – which is 140% in terms of percentage. The report of suspicious transactions mainly talks about transactions for the buying or sale of digital currencies.

According to the transactions movements, there is a growing trend over time from 2013 to 2018, for instance, in the year 2013 only 2 suspicious transactions were registered, in 2014 only 13, in the year 2015 there were just 52, in 2016 there were 124, in 2017 they increased to 208 and last year they were 98.03. This shows are positive growing trend, and this has stimulated the UIF and other financial intermediaries to look into these issues.

From January 2013 to December 2018, more than 895 reports talking about suspicious cryptocurrency loans were directly forwarded to the UIF. Of which over ½ of them came in 2018. A wide spectrum of the reports – around 95% – were sent by banking institutions and post offices, and others originated from payment institutions and those issuing cryptocurrencies plus other forms of electronic money.

In an announcement on May 28, 2019, the UIF revealed that the increasing diffusion of cryptocurrencies, the risk of distorted use of these instruments and the evolution of the regulatory context led the Bank of
Italy to renew their request to place maximum attention on identifying suspicious operations connected with digital assets. However, since last year, the Ministry of Economy and Finance has been surveying the sector operators who, when fully operational, will have to register in a special register kept by the Body of agents and mediators (OAM), to carry out the activity in Italy.

Most of the time, testified suspicion concerns the approaches of setting up the funding used in cryptocurrencies or the connection of operations with malevolent activities, including scams, cyberattacks and computer frauds. Among the 898 reported cases, there were 15 related to terrorist financing using cryptocurrencies including bitcoin, Ether, Ripple and others.

During the meeting on May 23 in Bucharest, largest capital of Romania, the European Union crime fighting organization, Europol, re-stressed the hazards and risks that are related to digital currency transactions. The organization went ahead to release a report warning the public about the money launderers evolvement, claiming that they use digital assets to conduct out their activities. It further noted that the illicit activities are being supported by new developments like decentralized cryptocurrency exchanges which enables bad actors to transact minus the consent of the customer.