Bitcoin has been on a huge bull run since the end of March, with the coin rising to almost $14,000 so far. While the Bitcoin price increase is undoubtedly positive for crypto traders holding the coin, it could mean the opposite for altcoin holders.

Sometimes there’s a negative correlation between Bitcoin and altcoins, meaning that when BTC’s price is increasing, altcoins are crashing relative to BTC. During the recent bull run, some altcoins have even declined against the dollar. It’s for this reason that many crypto traders (as opposed to Bitcoin HODLers) have cried out loud about their portfolios going in the wrong direction, despite the Bitcoin party. 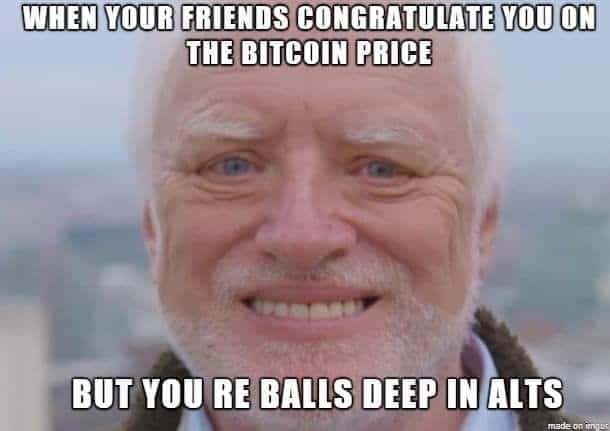 “I am 100 % into altcoins, portfolio went down to half after btc crossed $10k,” stated one anonymous trader.

“I’m currently 63% BTC, this was about 40% a while ago but bitcoin fixed that,” noted another.

As always, there were those expecting the next altcoin season to come:

“I have alts but I’m in green. Depends on which alts you choose. But don’t worry about it. Crypto is so volatile that I don’t believe naysayers saying there won’t be an alt season.”

In April, according to a survey of 10,000 traders, 47% of crypto traders were holding the majority of their portfolios in altcoins. Furthermore, 17% stated that altcoins comprised 40 to 60 percent of their portfolios, while 13% reported an amount between 20 and 40 percent.

Clearly, the vast majority of crypto traders either prefer altcoins to BTC or put a significant percentage of their funds into them.

Experts: Keep Your Risk Low With a Balanced Portfolio

The reason for crypto traders’ love of altcoins is that alts have proven numerous times that they can outperform Bitcoin: In March, Everex (EVX) marked huge gains with a price increase of 275% in a matter of two days.

While holding coins other than BTC is undoubtedly not a bad idea for diversification reasons, it’s been proven throughout the short history of crypto that altcoins bleed in value over time.

To keep your risks to a minimum, you should consider having a balanced portfolio with proper diversification between Bitcoin and altcoins, and most importantly, know which altcoins to hold.