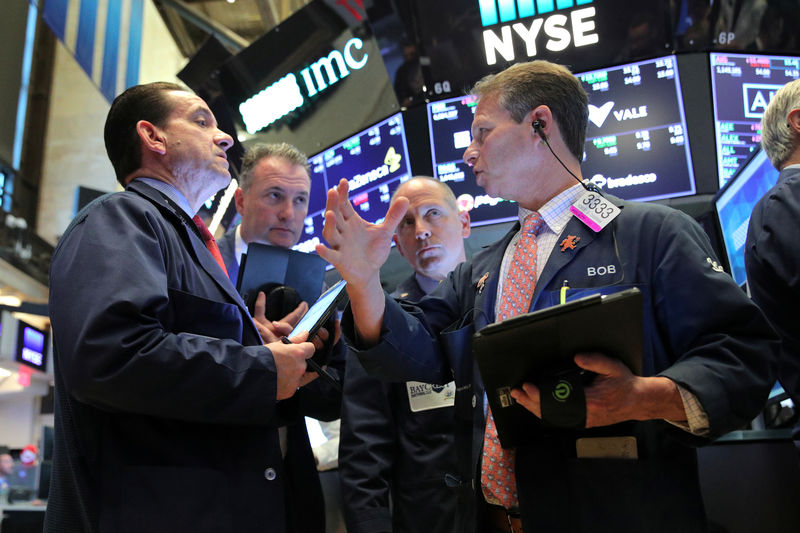 LONDON (Reuters) – What a six months for financial markets. Global equities have piled on $8 trillion, bonds are on fire, oil prices have surged by almost a quarter and a Greek bank is one of the world’s best performing stocks.

Everything added together it may well be the best first half of a year ever and one that not even the most wily investor would have predicted after the dire end to 2018 and what has happened since.

The world’s two top economies are slugging it out in a full-blown trade war and the recession warning klaxons are blaring, but still the performance numbers and milestones are astonishing.

The $8 trillion surge in global stocks is the result of a near 15% leap in MSCI’s world index (). That is challenging the dot.com boom days of 1997 as the best H1 in its near 40-year history.

Wall Street is up 18%, Europe 13% and China has jumped 20%, which is a lot of what it lost year even factoring in it has given back 5% since the trade tensions erupted again in early May.

Oil has raced almost 25% higher following its best first quarter since 2009. That has helped Russia’s rouble top the currency charts and though industrial metals have buckled badly in Q2, safe-haven gold is now scaling a six-year high.

“It has been really impressive,” said Swiss fund managers Pictet’s chief strategist Luca Paolini about the rebound from last year’s beating. “All sectors, all markets, all asset classes are in positive territory and that is rather unusual.”

(Graphic: World stocks straining for best start to a year ever – https://tmsnrt.rs/2FE0mYC)

A mirror image of 2018 when almost everything fell? Perhaps. But there have been two important drivers.

One was China showing it was serious about monetary and fiscal stimulus for its $14 trillion economy. The second of course has been the screeching change of direction by the Federal Reserve which suddenly looks set to cut U.S. interest rates for the first time since the financial crisis.

It has lit a fire under bond markets which have gone off like a rocket.

U.S. Treasuries, the world’s benchmark government IOUs, have made a whopping 7 percent as their yields have fallen almost 70 basis points this year. That followed a 37 basis point fall the last quarter of 2018, whereas in the five quarters prior to that they had consistently risen.

German Bunds – Europe’s go-to safe asset – have had their best H1 in two years, making roughly 5.5% as the European Central Bank has reversed course too. The yield on 10-year debt dropped below zero percent for the first time since 2016 in March and has since scored record lows.

A statistic likely to make most jaws drop is that Greek banks — remember all that euro debt crisis and capital controls stuff a few years back — have been some of the world’s best performing stocks this year.

The country’s biggest lender Piraeus Bank (AT:) is up 250% and the smaller Attica Bank (AT:) is up 343%. Athens has also been Europe’s best bourse this year, though it all trails the 550% gain vegan darling Beyond Meat

(Graphic: European markets in H1, Greece has smashed it – https://tmsnrt.rs/2FEGg0s)

Cryptoassets are back in vogue too with up 220% after its 2018 fall from grace and despite almost daily Brexit chaos and the loss of another prime minister, UK Gilts have returned 4.5%.

More risky high-yield debt, local-currency emerging market bonds and corporate debt have all brought in between 8%-9% and currency markets have been on the turn too.

“It is very unusual to see this breadth of strength,” said HSBC Asset Management’s chief global strategist, Joseph Little. “The question is, has it been too fast and too furious. It’s a very good question.”

The Fed’s pirouette means the () is about to experience its first quarterly loss in over a year, with the yen up over 2.5% and the euro () now back in the black having had its weakest Q1 since 2015.

The oil rally means the Canadian dollar — up 4% — and Norwegian crown — up 1.5% — have also done well, but as usual the wilder swings have been in emerging markets.

At the other end of the spectrum, the Russian rouble, another big petrocurrency, is up 10.5%. Egypt’s pound

Wall Street’s rally has left the S&P 500 () and Nasdaq () enjoying the view at record highs with the so-called FANG tech stocks providing much of the altitude again.

Despite the fierce tensions with China over Huawei, the tech sector () still tops the S&P 500 too and Microsoft (O:) and Cisco (NASDAQ:) are the top two performers on the Dow Jones () having both leapt over 30%.

“The next couple of weeks will set the tone for the second half. If trade talks momentum is gained, it would be hugely positive for risk assets,” Stefan Hofer, chief investment officer, LGT Bank Asia said.

“This is the most important (period) since the Global Financial Crisis. I can’t emphasize that enough.”