Bitcoin’s uptrend continues as, contrary to predictions, the chart is becoming steeper. Throughout the last few days, all eyes have been turned to Bitcoin, whose market dominance has steadily increased to 60%. Moreover, most altcoins are decreasing in value against it. It seems that market enthusiasm is beginning to be felt, ushering in yet another wave of FOMO. Those who were here before, however, know that this tune repeats itself, and as such aren’t as excited. Even as the altcoins shed value against Bitcoin, they are finding strength against the dollar.

Meanwhile, big players as well as opinion leaders in the cryptocurrency community are trying to keep altcoin season alive. This does seem a bit far-fetched at the moment, as Bitcoin’s impressive gains have been getting all the attention. Nevertheless, when Bitcoin reaches strong resistance, that could create room for alts to recover. It’s difficult to assess how and when this will happen, but it’s always good to be prepared.

The trend continues to be fairly mixed given the number of cryptocurrencies that have managed to make their way into the top 100. For instance, BEAM’s price has increased by about 50% while other prominent altcoins are quietly waiting in the wings. Of course, exceptions such as NEO, HyperCash, and Egretia always exist.

Airdrops tend to take place every now and then. This time it was Miblewimble’s airdrop for Bitcoin holders which opened its doors for registration.

Amid all the excitement surrounding the cryptocurrency markets, as well as the debate as to whether or not the volumes on various exchanges are real, the Financial Action Task Force recently issued guidelines for regulating the activity of cryptocurrency exchanges. It’s part of a push toward overall market regulation, and we expect to see further moves made in this direction.

It’s also important to remember that if price spikes are too sharp and you’re new to this market, you should take the necessary precautions and refrain from risking more than you can afford to lose.

A correction is likely to come, and this will allow us to understand where the market is headed. Meanwhile, we’ve probably entered the phase in which FOMO starts to settle in. This is also something to consider, and it’s appropriate to be very careful when making any investment decisions. 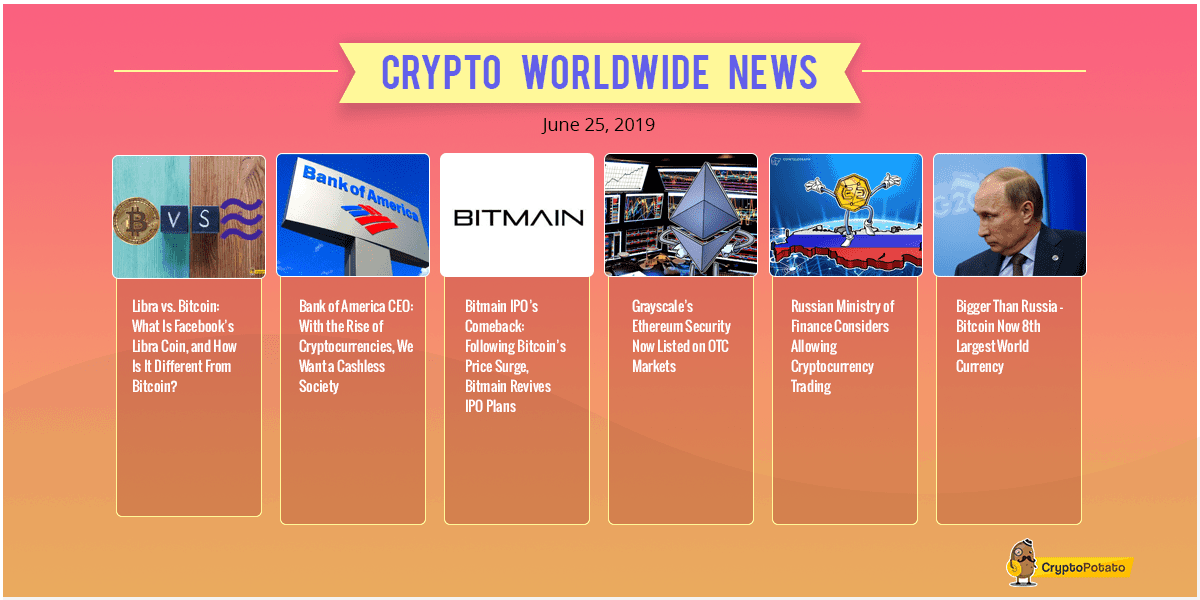 Libra vs. Bitcoin: What Is Facebook’s Libra Coin, and How Is It Different From Bitcoin? The announcement of Facebook’s Libra was undoubtedly the headline event of June. The asset-backed cryptocurrency, however, differs quite a bit from Bitcoin. Take a closer look at how it’s different and what you can expect from it.

Bitmain IPO’s Comeback: Following Bitcoin’s Price Surge, Bitmain Revives IPO Plans. What used to be the world’s largest cryptocurrency chip maker, Bitmain, is now reported to be resubmitting its application to hold an IPO in the second half of 2019. This time, however, the company will seek a listing in the US and, hence, will be filing its application with the country’s Securities and Exchange Commission (SEC).

Grayscale’s Ethereum Security Now Listed on OTC Markets. The Grayscale Ethereum Trust (ETHE), which represents Grayscale’s Ethereum-based security, is already available for trading on over-the-counter (OTC) markets. It is a means of investing in the popular cryptocurrency without having to actually hold it.