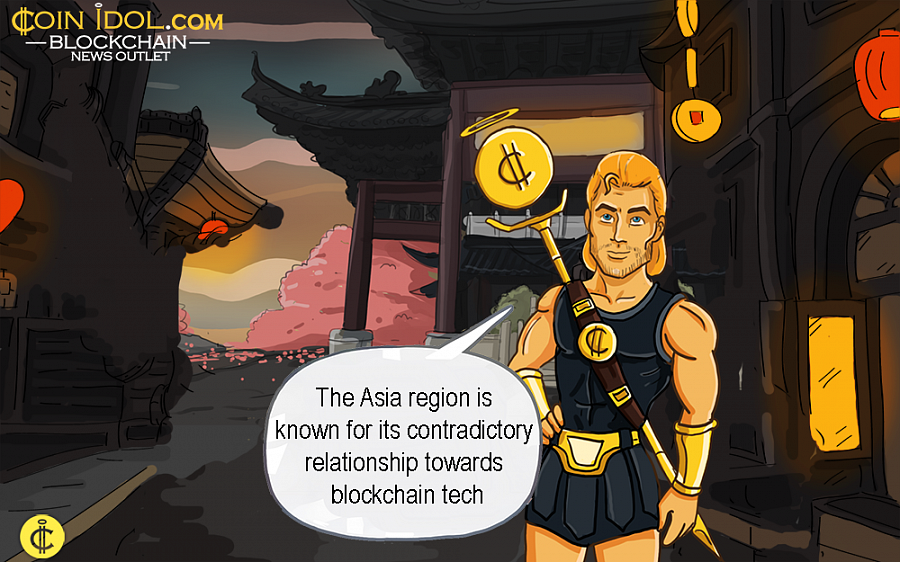 The Asia region is known for its contradictory relationship towards blockchain technology plus cryptocurrency and its decentralized nature. Some countries such as China, Japan, Singapore, Hong Kong, South Korea, etc., embrace it for its innovativeness and disruptive potential, while others try to strictly regulate or even ban it.

Last year was a period of digital currency, to get the news express it. While
Bitcoin (BTC), Ether (ETH), Ripple (XRP)
soared and then plummeted more, there is only one thing that is very clear – blockchain and digital currencies are not going anywhere, no matter if you love or disgust them.

Asia has been captivated with digital assets, since it is the continent from where original cryptocurrency Bitcoin was born, but the lack of a solid centralized authority has caused a great number of governments to be anxious, and activated a variety of responses.

The motherland of Bitcoin, Japan, revised legislation so it can
define cryptocurrency as a means of payment and to further demand every currency exchange operating within the country fully register with Japan’s responsible financial authorities such as the Financial Services Agency (FSA), a government agency in charge of supervising insurance, banking, securities and exchanges with the aim of guaranteeing the stability of the financial system of the country.

The giant Asian crypto markets, Singapore and Japan, registered a significant progress in allowing blockchain activities and regulating the digital assets as well. Basing on these two great countries, a template on how crypto and government can harmonize, live/work together and bear fruits.

Singapore
support blockchain and other revolutionary novelties by allocation huge funds to run projects, research and other necessities. The country plans to connect all stakeholders who are inside or outside of this industry using blockchain and distributed ledger technology.

A Friend to Blockchain, an Enemy to Cryptocurrency

The People’s Republic of China is one of the most active countries in Asia with the highest number of blockchain and Bitcoin users. However, as for the government, its position on this nascent revolutionary industry is very clear:
friendly to blockchain technology but enemy to cryptocurrency including Bitcoin.

Early last year, China put a ban on all crypto-related activities with an aim of combating financial risks. It did this by confiscating and rejecting both local and foreign platforms that are related to initial coin offerings.

Before the
ban of crypto China was the biggest digital currency market for mining, selling and buying. The country was even the leading manufacturer of crypto mining equipment. In 2017, the production and technology bull collaborated to setup a large-scale
mining farms in China to achieve a significant increase in the crypto production.

To Ban or Not to Ban?

However, early last year, Korean regulators made a decision that was
against this total ban of crypto. The authorities revealed that they wanted to normalize digital currency industry.

The country has shown the potential of becoming a large digital currency and blockchain hub in Asia. Hong Kong’s Securities and Futures Commission revealed strong and ample rules managing digital currencies. Hong Kong wants to become a safe haven for blockchain projects and also grow into a main trading center. However, back in February last year, Hong Kong together with China, were busy
tracking down all digital currencies in the market.

Nevertheless, the newly introduced rules and regulations prohibit retail investors from dealing in cryptoassets, and further gives a clarity to institutional investors and cryptocurrency exchanges on where they can or can’t operate.

Generally, Asia continues to have unending love and desire for blockchain technology and digital currencies. So investors who are willing and able to venture into these innovative technologies should utilize these lucrative opportunities. In so doing, Asia will see an increasing growth of blockchain industry, which would in turn trigger the prices and values of cryptocurrencies including Bitcoin, Ether, Ripple, etc., gain traction.

Georgia to Turn into a Blockchain Hub for Global Business