With the release of social media giant Facebook’s digital asset, confusion may arise for folks who do not know much about Bitcoin. Let’s dive into what Facebook’s new Libra coin is, and how it differs from the most famous cryptocurrency, Bitcoin.

Operating under the name Libra, Facebook’s digital asset will be used for global payments, according to its whitepaper released on June 18. “Libra’s mission is to enable a simple global currency and financial infrastructure that empowers billions of people,” the whitepaper states.

The whitepaper details the current problems facing global finance, including limited access for certain individuals and high fees. The paper also points out a few difficulties, such as the lack of adoption as well as volatility exhibited by cryptocurrency assets.

In the whitepaper, the Libra is ascribed three key components:

“It is built on a secure, scalable, and reliable blockchain […] It is backed by a reserve of assets designed to give it intrinsic value, and it is governed by the independent Libra Association tasked with evolving the ecosystem.”

Facebook’s asset runs on an open-source blockchain called the Libra blockchain, and operates in relation to a reserve, the whitepaper noted.

“Libra is fully backed by a reserve of real assets. A basket of bank deposits and short-term government securities will be held in the Libra Reserve for every Libra that is created, building trust in its intrinsic value. The Libra Reserve will be administered with the objective of preserving the value of Libra over time.”

The asset will be a stablecoin of sorts, the whitepaper stated. “Libra is designed to be a stable digital cryptocurrency that will be fully backed by a reserve of real assets — the Libra Reserve — and supported by a competitive network of exchanges buying and selling Libra.” The Libra Association will be in charge of the coin supply and its relation to the reserve.

According to the whitepaper, “The Libra Association is an independent, not-for-profit membership organization headquartered in Geneva, Switzerland. The association’s purpose is to coordinate and provide a framework for governance for the network and reserve and lead social impact grant-making in support of financial inclusion. The association’s membership is formed from the network of validator nodes that operate the Libra Blockchain.”

Comprised of various businesses, organizations and institutions located across the globe, the Libra Association’s list of “Founding Members” is quite substantial. The list includes the likes of PayPal, Mastercard, eBay, Lyft, Vodafone Group, Coinbase, Andreessen Horowitz and Union Square Ventures. The asset is expected to launch within the first six months of 2020, the whitepaper noted.

The Libra will begin as a permissioned blockchain, with the goal of becoming a permissionless network, the whitepaper said. Libra’s blockchain also differs from traditional blockchain technology with regards to its chain: “[T]he Libra Blockchain is a single data structure that records the history of transactions and states over time.”

Furthermore, the whitepaper stated that asset addresses will be pseudonymous, similar to what is currently seen in cryptocurrency. 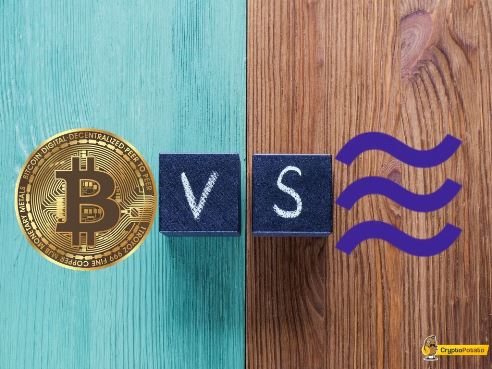 Bitcoin differs significantly from Facebook’s new asset in many ways. Perhaps the most notable difference lies in Bitcoin’s decentralization. No single entity controls Bitcoin. In contrast, Facebook and the Libra Association have a large amount of control over the Libra asset and its usage. The setup of Libra’s Association also appears to give sizeable entities (or chosen entities) power over what might become a top global asset – the Libra. Bitcoin does not give control to such businesses in the same fashion.

A Question of Value

Facebook’s digital asset is tied to national currencies and other assets. This means Libra’s value depends on the inflation and effects of the underlying currencies, as well as on governmental control. Bitcoin’s value is not dependent on any one government as with fiat currencies (such as the US dollar or the Australian dollar).

Bitcoin is also deflationary. There will only ever be 21 million bitcoin in existence. This prevents inflation. In contrast, the Libra Association, as stated above, will be in control of the Libra asset’s supply. In a way, this means that users must rely on the Libra Association and its actions.

Facebook’s Libra will initially run on a permissioned blockchain, which means miners must seek approval before starting to mine. In contrast, Bitcoin’s blockchain is permissionless, so miners can simply begin mining at their discretion.

Accenture About To Sign A Deal With Canada, Netherlands, and Aviation Players