The FOMO is once again starting to flood the market as Bitcoin continues to increase substantially. According to forecasts from previous updates, 2019 continues to be a rather fruitful year for cryptocurrency investors who definitely gained a lot of confidence in the past few months. As a result of the recent trend, traditional media is once again starting to notice Bitcoin and we can see that the coverage in recent weeks is steadily increasing.

Facebook continues to prepare for the official launch of its cryptocurrency and the community wonders how this will impact both the cryptocurrency and the financial markets, in general. Even though we have yet to see the official release, available information already suggests that the cryptocurrency won’t have similar characteristics as Bitcoin in terms of transparency, privacy, as well as censorship immunity and so forth. However, it does compete with the role of the overall banking system and we’re definitely looking forward to how it would turn out.

Despite the enthusiasm around the project, it’s worth noting that Facebook previously blocked all advertising possibilities for industry-related companies and all of a sudden is now proudly waving its crypto flag. Additionally, other big names such as JPMorgan, who didn’t believe in the merits of cryptocurrencies and expressed aversion towards it are also starting to change their attitude for the better.

Meanwhile, when it comes to alternative coins (altcoins), the trend is somehow mixed. It’s impossible to overlook the 90% increase that Grin marked last week, however. Other privacy-oriented cryptocurrencies also saw serious increases, namely Beam and Zcash, as well as Monero. Additionally, Chainlink increased by 60% over the past week following the announcement of its collaboration with Google.

It’s also important to note the increasing Bitcoin dominance which keeps on going forward as the majority of altcoins suffer when trading against it. The trend, however, is mixed, and opportunities can be found even periods of the kind.

Another important development was the announcement that Binance won’t allow US traders starting from September 12th. However, this doesn’t really impact the trading volume while Binance already said that it will be working on an alternative solution for those users. It will be interesting to see how the market deals with this situation and whether or not other exchanges will benefit from it.

We can wrap it all up by saying that this was yet another positive week on the market, especially given the fact that there’s still quite a lot of time to one of the most anticipated upcoming events – Bitcoin’s halving. As we have already mentioned in previous updates, the race for stacking Bitcoin prior to the halving has already started. 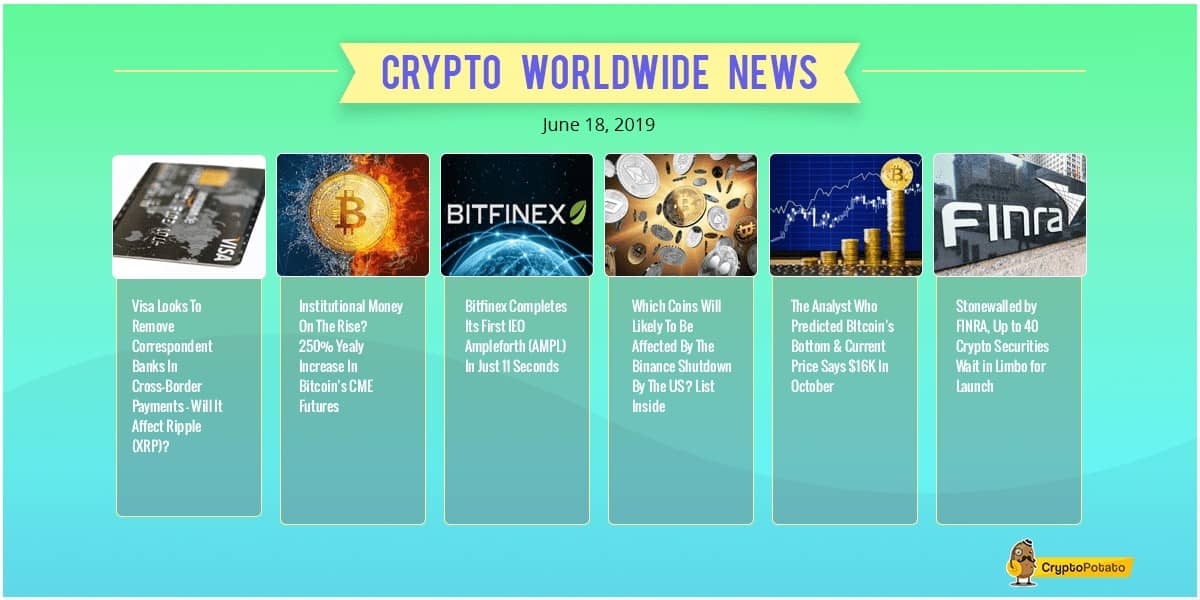 Institutional Money On The Rise? 250% Yealy Increase In Bitcoin’s CME Futures. Bitcoin future contracts on the Chicago Mercantile Exchange (CME) have recorded upwards of 250% year-over-year increase. This signals that institutional money is starting to come into the market, which is a “very bullish” signal for Bitcoin according to Fundstrat’s Tom Lee.

Bitfinex Completes Its First IEO Ampleforth (AMPL) In Just 11 Seconds. Popular cryptocurrency exchange Bitfinex has completed its very first IEO. The project is known as Ampleforth and the sale was over in just 11 seconds. This shows serious interest just as it was back when Binance was using the same IEO mechanism.

Which Coins Will Likely To Be Affected By The Binance Shutdown By The US? List Inside. Binance announced that it will be shutting down trading options for US citizens starting September 12th. However, the exchange will simultaneously create a US-compliant venue. Here is a list of the cryptocurrencies which will be affected by this change going forward.

The Analyst Who Predicted BItcoin’s Bottom & Current Price Says $16K In October. An anonymous analyst who has managed to successfully predict that Bitcoin will hit $9,200 by the end of July now holds that the cryptocurrency will increase to as much as $16,000 by October in 2019.

Stonewalled by FINRA, Up to 40 Crypto Securities Wait in Limbo for Launch. Up to 40 different cryptocurrency-oriented companies are waiting in line to launch as the Financial Industry Regulatory Authority (FINRA) has delayed their applications for months. This could lead these projects to leave the US and launch under different jurisdictions.

This week we have a chart analysis of Bitcoin, Ethereum, Ripple, Zcash, and Cosmos  – click here for the full price analysis.

Opinion: Facebook Libra Will Revolutionize The Economy As We Know Today