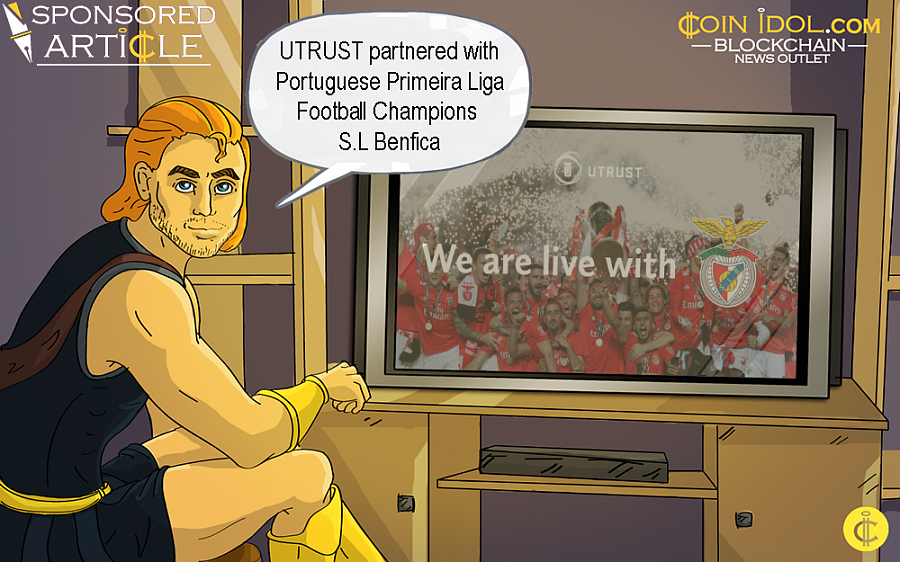 In a bid to promote cryptocurrency adoption and utility, digital currency payment solution platform UTRUST partnered with Portuguese Primeira Liga Football Champions S.L Benfica, in order to allow the use of cryptocurrency for the purchase of ticket and merchandise sold directly from the Benfica website.

The UTRUST transaction portal through which users to pay for stuff purchased on the website is now enabled, bringing more exposure to cryptocurrency thereby opening up the market to millions of Benfica fans and possibly billions of football sport fans around the globe. UTRUST Co-Founder and CEO, Nuno Correia confirms this wide-scale adoption potential, stating:

“This partnership with Portugal’s number one football club marks a major milestone for UTRUST and the blockchain ecosystem as a whole. Benfica is one of the biggest sporting clubs worldwide and we are delighted to be making cryptocurrency payments possible for their 14 million supporters around the world.”

As a popular football club in Portugal, notably having more than 14 million supporters globally,
S.L. Benfica is recognized as one of the world’s most passionately-supported football clubs whose recent feat to reclaim Primeira Liga title for a record 37th time, has yet again made them undeniably one of the most decorated clubs in Portugal.

As part of the club’s strategy to improve marketing and increase the multi-currency channel for its fan-base, Benfica adopted the cryptocurrency payment solution in partnership with
UTRUST which is said will impact both its global and native consumer base, such that it could bring tech-savvy and cryptocurrency holders in Portugal and abroad closer to home – the Estádio da Luz.

UTRUST, on the other hand, has significantly upgraded their services to allow for more swift crypto-to-fiat conversions, making it easier for both consumers and merchants to avoid the impact of crypto market volatility. More so, the partnership now affords Benfica the opportunity to leverage cutting payment solutions, as highlighted by S.L. Benfica CEO, Domingos Soares de Oliveira, who stated that the new found partnership with
UTRUST affords them the edge in terms of novel payment technologies. He said:

“This is an exciting day in the history of S.L. Benfica as we announce our decision to accept cryptocurrency payments. Our benfiquistas make Benfica the unique and special club it is and we recognize that many of our supporters are now digital users first so we want to be ahead of the curve when it comes to adopting novel technologies and giving our supporters the best online experience. We are very excited about the possibilities that this partnership with UTRUST presents in the evolution of our e-commerce strategy and we look forward to accepting our first cryptocurrency payment.”

Specific advantages to be derived from the UTRUST gateway will include lower processing fees when compared to their counterparts, fast and secure transactions will be executed while ensuring that Benfica will be able to receive the funds to their bank account on the same day that the transactions are executed.

Moreover, due to the nature of the ‘sincerity’ of the blockchain, using cryptocurrencies for payment will ensure finality, thereby cut-back fraudulent credit-card hacks and chargebacks.

As of now, users of the
Benfica website can now purchase a variety of merchandise to include tickets, clothing, and other custom items now sold on the Benfica website. There’s an ongoing 10% discount proposition given to partners redeemable by using the ‘UTRUST’ code.

UTRUST is the leading cryptocurrency payment solution designed to modernize the finance and payments industry and solve the problems of traditional payment methods by offering instant transactions, buyer protection, and immediate crypto-to-cash settlements for the merchant. The Swiss-based startup was recently granted SRO approval to operate as a ‘financial intermediary’ under VQF, the self-regulatory organization approved by Switzerland’s independent financial-markets regulator, FINMA.

To learn more about the UTRUST platform:
https://utrust.com/

Disclaimer. This article is paid and provided by a third-party source and should not be viewed as an endorsement by CoinIdol. Readers should do their own research before investing funds in any company. CoinIdol shall not be responsible or liable, directly or indirectly, for any damage or loss caused or alleged to be caused by or in connection with the use of or reliance on any such content, goods or services mentioned in this article.