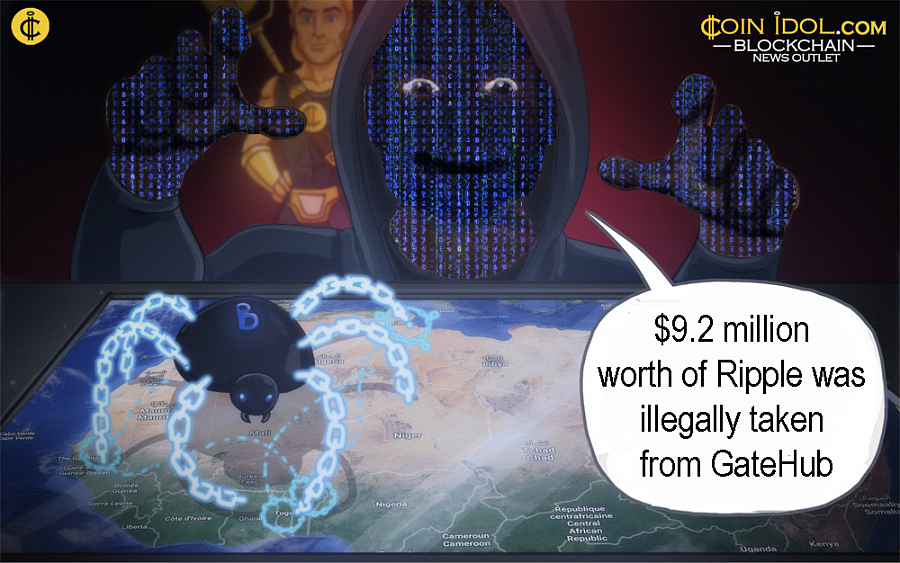 The world’s third largest cryptocurrency by market cap, Ripple (XRP), is on the move after an unsuspected attack by anonymous hackers. Early this month, around $9.2 million worth of Ripple (23 mln of XRP) was illegally fetched from GateHub, a digital currency wallet service provider. It looks like the hackers are now in the process of moving the stolen Ripple and cashing out at any available opportunity.

According to Thomas Silkjær, a senior big data expert, the attackers have been attempting to get better ways of cashing out this stolen money by sending weighty sums of stolen Ripple to a series of cryptocurrency exchanges including HitBTC, Coinbase, Binance, KuCoin, Bitstamp, Bittrex, Huobi, Bitfinex and others.

According to a report from ChangeNow, a cryptocurrency exchange platform, more than 2.5 million Ripple from a new unknown user, was moved to its service platform. Fortunately, the exchange’s team managed to prevent part of the money from being exchanged into other virtual currencies. The team members were able to retain over 500,00 XRP out of the stolen 2.5 million.

Also, according to GateHub, more than 18,000 of Ripple accounts are said to be compromised because of this attack. The exchange
urged its users via their respective emails to shift their XRP immediately to a more secure GateHub hosted wallet, since the exchange can’t shift or withdraw crypto on behalf of their customers – remember, the hacked exchange doesn’t have full access to customers’ native RCL wallets. GateHub said that their XRP Ledger Wallets are highly shielded with secret keys which are kept in an encrypted way.

GateHub together with XRP Forensics, a popular research group for Ripple, revealed that the malicious attacker initiated the bout hack with a valid access coin via the GateHub API. It is still unclear on how the attacker got the access coin and other necessary information used to decrypt the private keys. The attacked exchange
elaborated the other things remaining unknown.

Hackers on the Move

This year, the crypto and blockchain industry has seen a series of hacks and most of them started in the winter. 2019 started with the hack of New Zealand based exchange platform Cryptopia which lost over $18 mln to unknown thieves. Then followed the hack of other giant exchanges including
Binance that lost over
7,000 BTC,
CoinBene, DragonEX that lost over
$723k in ETH, and others. What is surprising is that, in Q1 of 2019 alone, the crypto exchanges lost more than $356 million to hackers.

In most cases these hacks cause a big loss to the users and this has damaged the image of the industry. Yes, we know that the technology is still embryonic, and this is the very advantage being taken by hackers to steal exchanges and individual users. Could the Lazarus Group of hackers from North Korea be behind all these hacks?

A Decentralized Project Using Collaborative Governance to Determine Its Future