Unlike in other countries, where startups are at the heart of blockchain development, the South Korean blockchain landscape has “chaebols,” large, family-owned business conglomerates in Korea, at its heart. Just about every month, reports and announcements of large South Korean companies — including Samsung, Naver and NHN, just to name a few — entering into the blockchain space emerge.

Still, South Korea is one of the most advanced markets in the blockchain and cryptocurrency industry. The first indication comes from how dominant Korean exchanges were during the crypto bull run of 2017, with crypto prices almost always trading at a premium on local exchanges relative to those in other countries.

A second indication is how the Asian country is one of the leaders in blockchain innovations, with projects in the country filing the third-highest blockchain-related patent applications globally.

South Korea was one of the first countries to take regulatory actions against Initial Coin Offerings (ICOs) and also to initiate regulatory oversight on the operations of local crypto exchanges.

Since ICOs have been fundamental to the proliferation of blockchain startups around the world, the stiff regulatory stance against them in Korea could have tipped the scale in favor of chaebols and conglomerates, all of whom have deep pockets to invest on research and development.

Startups have had to relocate to other countries, chiefly Singapore, to raise funds through an ICO. This explains the dominance of larger companies in the South Korean blockchain space.

The involvement of the Korean conglomerates in blockchain is an extension of how modern South Korea encourages starting early.

The East Asian country has been listed as the most innovative country in the world for six straight years on the Bloomberg Innovation Index.

Cointelegraph has already covered how South Korea’s large companies are entering into the cryptocurrency market by investing in or establishing subsidiaries that run crypto exchanges.

Here’s a look at how these companies are entering into the blockchain space at large.

Mostly known for operating KakaoTalk, the country’s number one messaging application, Kakao has been diversifying into the blockchain space, notably with the launch of Upbit via its portfolio company Dunamu Inc. Dunamu already had a working stock trading app called Kakaostock. It has since developed a Blockchain-as-a-service (Baas) platform called Luniverse.

Kakao became more directly involved in blockchain business through its Tokyo-based blockchain subsidiary, GroundX. GroundX has developed a blockchain platform of its own dubbed Klaytn. The blockchain platform will host decentralized apps (DApps) and had already signed on 34 initial DApp providers as of May 30. According to reports, Kakao will soon integrate a crypto wallet into its messaging app so users can perform peer-to-peer transactions on the most popular messaging app in the country.

Kakao has also invested in a number of blockchain startups through its investments arms. These include Israel-based BaaS provider Orbs and stable coin project Terra. Interestingly, Danamu and business management software provider Korea Credit Data — both Kakao portfolio companies — are reportedly working together on a blockchain-based procurement platform.

For further reading on South Korea: Korea’s Largest Internet Firm Kakao Is Running a Crypto ICO That Is Not Subject to SEC Scrutiny

NHN is reportedly coming onboard the project with its payment technology while Coinplug is bringing its blockchain knowhow to the table. There are not many public reports on NHN’s involvement in blockchain beyond reports of its investment in OKCoin in 2018 and now working with Korea Post to build a blockchain payment system.

OKCoin Korea is scheduled to launch later on June 18. NHN has an investment arm called NHN Investment Co. Ltd. and it doesn’t appear to have any blockchain project in its portfolio.

Samsung Group is a chaebol with at least 26 affiliate companies, one of which is Samsung Electronics, the maker of Samsung televisions, smartphones and other electronics appliances. With a total revenue in excess of $200 billion annually, Samsung Group is South Korea’s largest company. Some of its affiliate companies have been busy getting involved with blockchain by investing in blockchain startups. 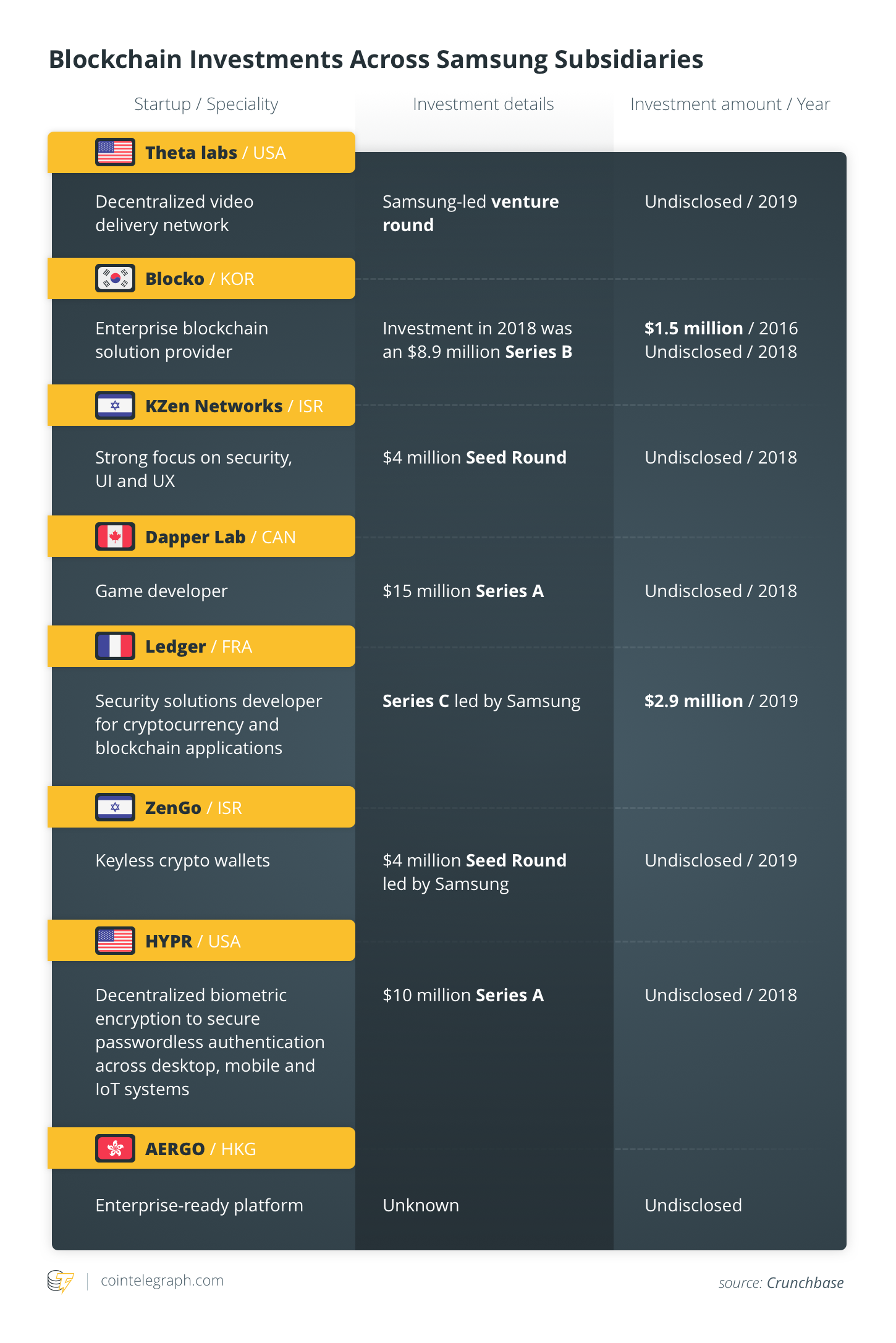 Samsung’s involvement in blockchain goes deeper than these investments. The company has a dedicated blockchain division established by its IT company Samsung SDS, the arm of Samsung Group that invested in Blocko.

A Samsung SDS spokesperson wrote to Cointelegraph it has developed a private permissioned blockchain called Nexledger:

“Nexledger consists of a blockchain core that integrates a range of components such as monitoring tools, external linkages, application programming interfaces and a structured DevOps environment.

This has created a full-featured platform for diverse use cases across a large number of verticals that also comes with some significant performance increase. It ultimately helps enterprise customers across a variety of verticals including government, manufacturing, finance, and logistics to innovate their business processes and increase efficiency by providing blockchain-based services.” 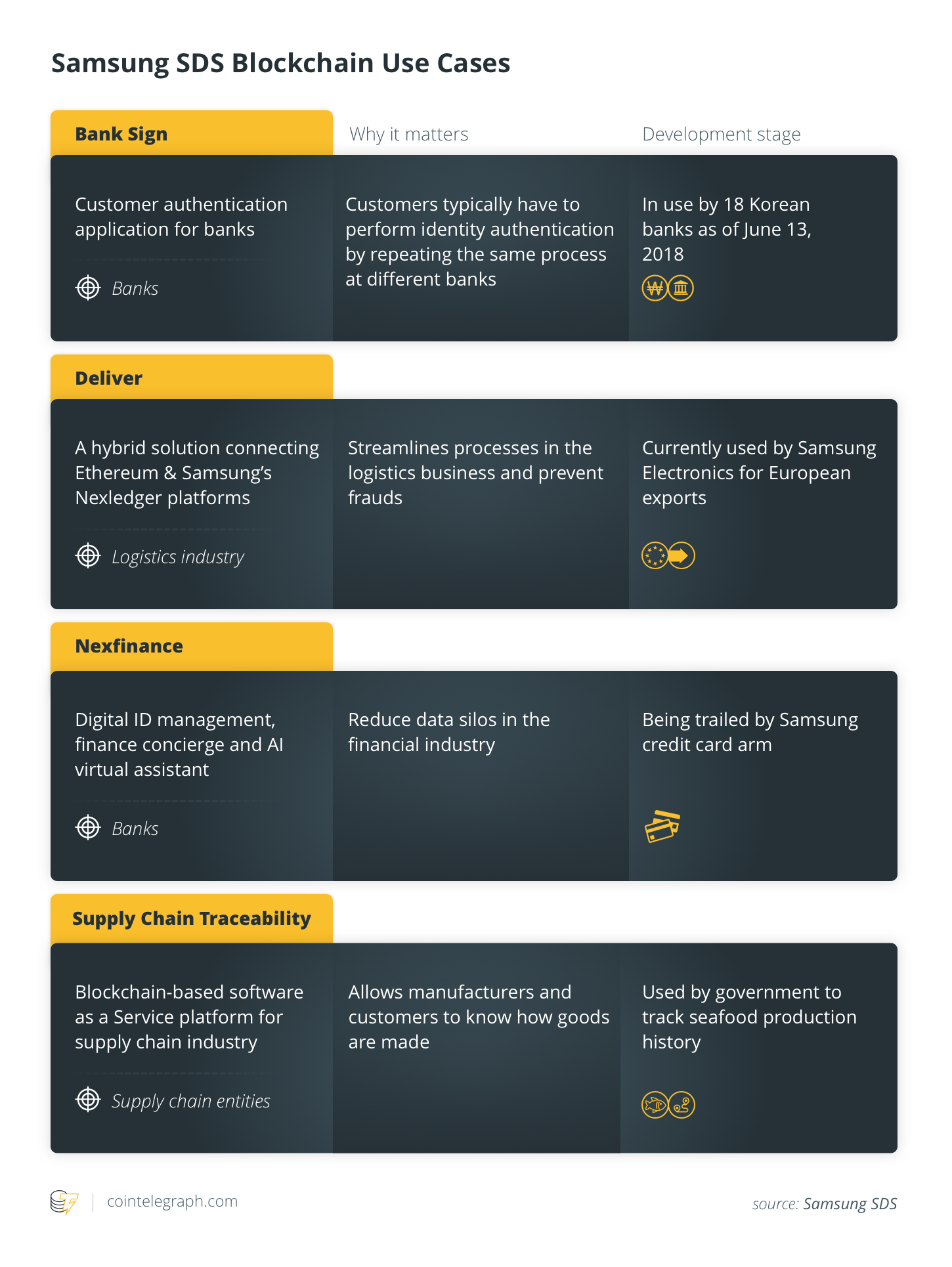 Samsung’s presence in the blockchain space extends to crypto mining through its chips owned by Samsung Electronics. Its semiconductor revenue, which includes mining chips, grew from nearly $50 billion in 2016 to about $65.3 billion in 2017, the year of the great crypto bull run. That is about a 30% increase. Samsung Electronics revenue in this segment dipped in 2018, with the company blaming suppressed demands from mining chips.

While South Korea’s financial regulators have a tough stance on cryptocurrency, other governmental agencies in the country are investing in blockchain through any company — large conglomerates or startups — that can offer a real-world, process-improving use case.

ICON, a homegrown project, is working with a number of governmental agencies, notably with Korea’s National Election Committee, to develop a blockchain-based election system that allows candidate registration, voting and ballot counting. The blockchain startup told Cointelegraph such opportunities are open to any and every company.

The government is commissioning blockchain projects in a step-by-step approach to ensure qualification as public service. Each year, several government agencies — such as the Korea Internet & Security Agency and the National IT Industry Promotion Agency, which are under the Ministry of Science — opens public bidding for every industry and sector. The depth of commissioned projects varies from R&D, proof-of-concept (PoC), consulting, pilot and other stages of implementation, according to Icon co-founder Min Kim.

The platform is the enterprise service arm of the Icon Foundation, which raised about $43 million during its ICO in 2017. Icon sees a future for both enterprise and public blockchain. The foundation set up its an enterprise arm that’s working with larger companies and governmental agencies. It’s also working on growing the adoption of its public blockchain through Icon’s node election campaign called “ICONSENSUS.” The foundation has been accepting applications from node candidates, similar to how the EOS community elects Block Producers to govern the network.

Fleta, another blockchain startup building a platform for DApps, is benefiting from governmental initiatives, having being selected for a blockchain proof-of-concept project, involving the development of a clinical trial data collection system its own blockchain.

Fleta said the support of the Korean government will be helpful in taking its clinical studies system to other local companies — and eventually internationally.

The Korean government is known to always foster technological developments by funding local companies. This was a central part of how it supercharged its economy in the mid-20th century. It’s hard to tell if South Korea will be home to the next wave of blockchain billion-dollar multinational companies, and that makes the blockchain space in the Asain country a good one to watch.

As of now, however, some countries — notably the United States and China — are ahead of South Korea with regard to business development for blockchain, according to Fleta CEO Seungho Park, pointing at local Korean venture capitalists’ reluctance to invest in local blockchain startups as a challenge.

“I think the USA and China are far moving ahead of us. It’s a shame that Korean VCs and investment organizations tend to be cautious about blockchain technology. They are paying attention to business values after the technology is applied, based on their own understanding and perspectives on the technology and industry.”

Of the 50 investments made by South Korean venture capital firms since the year’s start until June 12, only three investments were directly in blockchain or crypto-related companies, according to data derived from business information platform Crunchbase. Out of the three, only one of them is based on the Korean peninsula.

South Korean financial institutions are making moves on cryptocurrency and a number of  regional governments are exploring a switch to converting their local fiat currencies to cryptocurrency in order to benefit from the transparency and security benefits that come with digital assets.