The cryptocurrency market corrects again, its capitalization decreased by about 10% over the week. Many analysts point to the pressure from the big players and the influence of the US and Chinese trade wars, prompting investors to get rid of high-risk assets.

However, from a technical point of view, the market is adjusted before the upward movement. Moreover, round values ​​are often serious psychological levels. Therefore, the recent bitcoin rebound from $ 9000 is not unusual.

The main cryptocurrency is trading near the lower boundary of the ascending channel. Moving averages are directed upwards, which indicates the presence of an upward impulse. BTC/USD failed to consolidate above $ 9000, but even now the test area between the moving averages only took place.

The RSI ​​fall below level 30 for the fourth time. Earlier, after such decreases, the asset continued to grow, so now the main idea is to continue to rise. Cancellation of this scenario can be a breakdown of the lower boundary of the channel and fixing quotes under the level of $ 7,175. After BTC/USD go beyond the ascending channel, a further decline to the level of $ 5660 may follow. 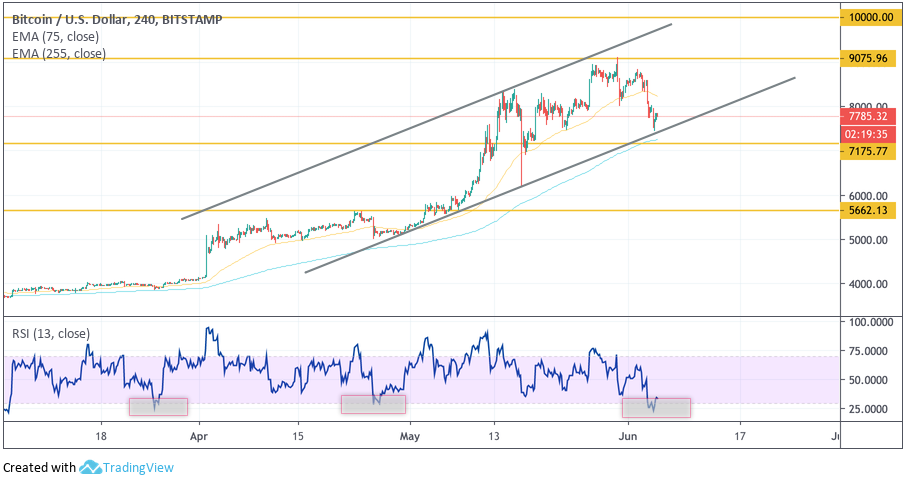 On the hourly chart we can see a downward correction of BTC price. As a short-term trading idea, we can expect a fall to the lower boundary of the channel around $ 7,000 and an attempt to continue growth. This scenario is favored by another bounce from the support line on the RSI. A breakdown of the upper boundary of the downward channel and closure above $ 8400 will be a confirmation of this. 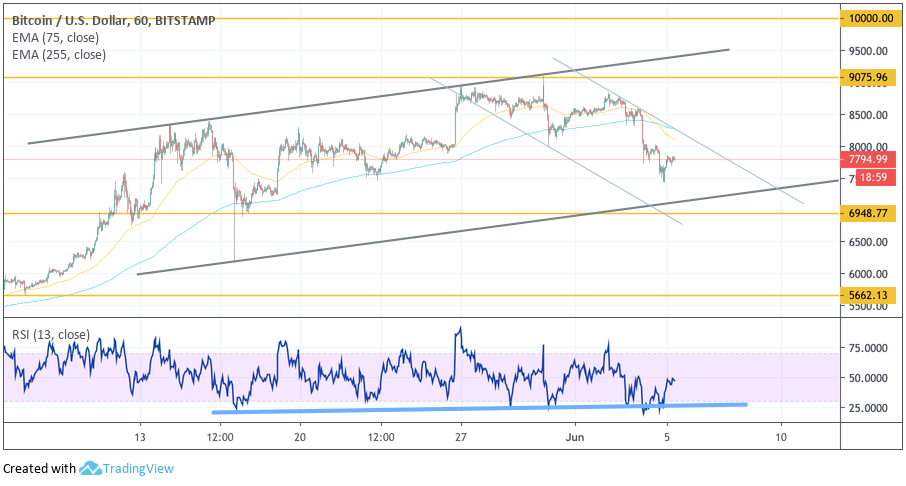 At the moment we are back inside the channel, which demonstrates the weakness of customers. As the main trading idea, we can expect a decrease in the asset with a test of the upper boundary of the cloud at $ 5.90 and continued growth. 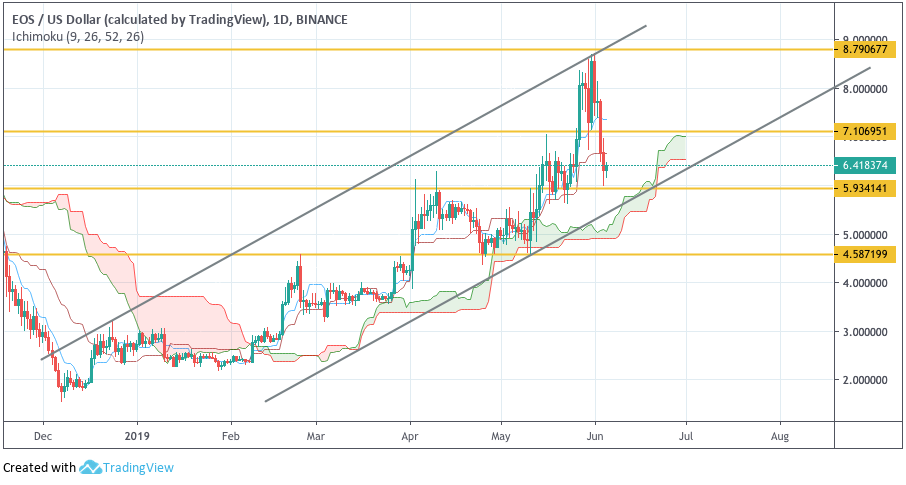 The price movement on the four-hour chart looks upward. EOS/USD pushed off the support level. However, for confident growth to continue, it is important to see the breakdown of the resistance level and the close above $ 7.10. If buyers fail to consolidate higher and a breakdown of the support level with the departure of quotes under $ 5.93 takes place, this will indicate a fall increase with the target at $ 4.58 and below. 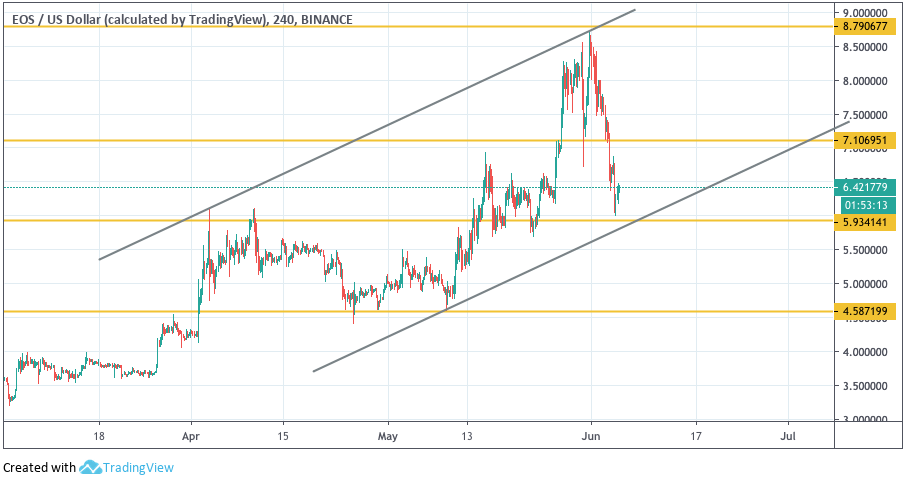 ETH/USD is adjusted, and at the moment there is a rebound from the lower border of the Bollinger Bands indicator. This is a good signal for continued growth. As we can see, earlier this test provoked an increase from $ 145 to $ 280. The current situation looks similar, so we should expect an attempt of a sharp rise in cryptocurrency quotes.

An additional positive signal is the fixing of quotes above the upper boundary of the ascending channel. The growth target will be at a distance equal to the width of this channel.

As the main trading idea on the daily chart, we should expect another attempt to test the support level at $ 231 and continue lifting. Cancellation of this option could be a fall with the breakdown of the upper boundary of the ascending channel and fixing quotes under the level of $ 230. In this case, the immediate goal of the fall will be $ 190. 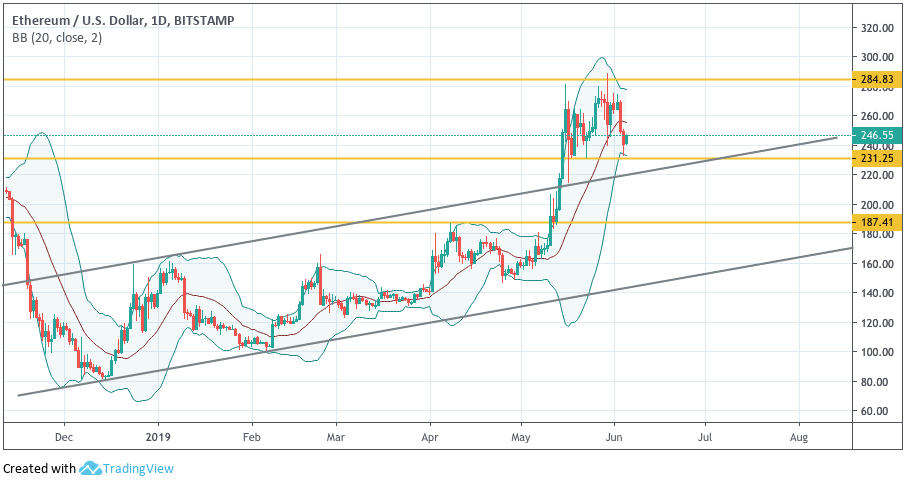 ETH/USD has pushed away from the lower boundary of the ascending channel, which implies continued growth with the first goal at $ 284. Confirms the upward movement of the breakdown of the middle line of the Bollinger Bands and the closure above $ 260. This will indicate the end of the short-term downward trend and its shift to the upward one. Cancellation of this scenario will serve as a decline with the breakdown of the support level at $ 230. In this case, we should expect the continuation of the fall to the width of the current channel with a target of $ 187. 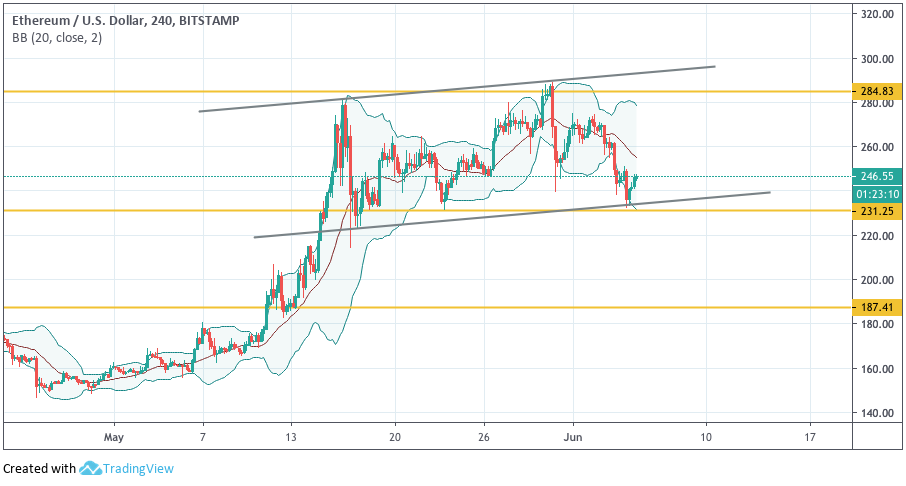 Digital Silver tested the lower limit of the rising channel and now we are seeing a rebound. As you can see, quotes were able to gain a foothold above the psychologically important level of $ 100, which currently supports. Such a rebound from the level also indicates a likely continuation of growth with the first goal at $ 122. Cancellation of the option with the rise of ETH/USD will fall with a breakdown of the lower boundary of the channel and closing below $ 97. In this case, we can expect a continuation of the decline to $ 83. 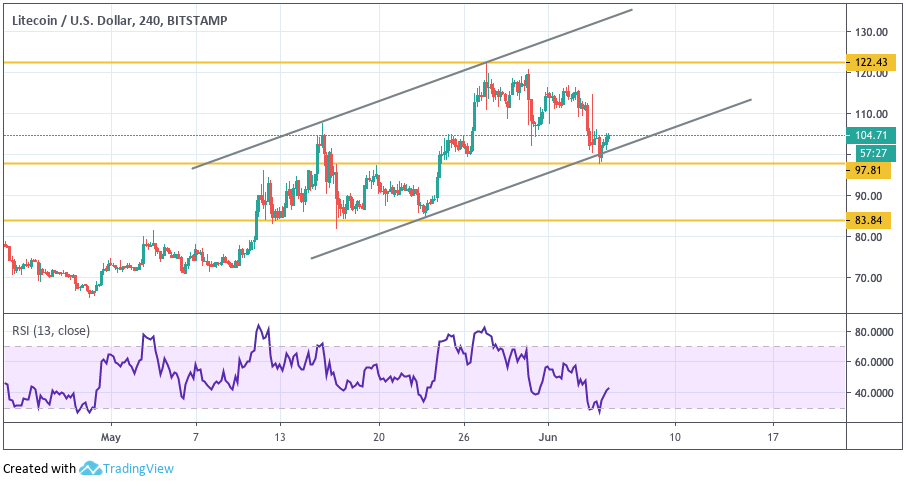 As we can see a rebound from an important level of support. A strong signal for growth here is a breakdown of the downward trend line on the RSI indicator. This suggests the possibility of a breakdown of the resistance level with fixing quotes above $ 122. In the case of a continuation of the correction and a fall under $ 95, we can expect a prolonged price reduction. 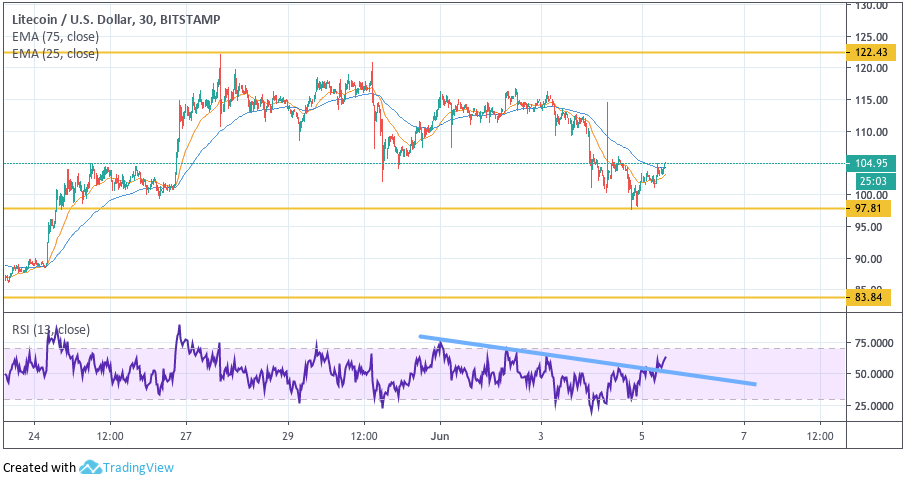 The Ripple XRP Token is trading within the uplink. The current price movement pattern is a harmonious trading pattern called “5-0”. This model indicates continued growth after the test of the lower boundary of the ascending channel. 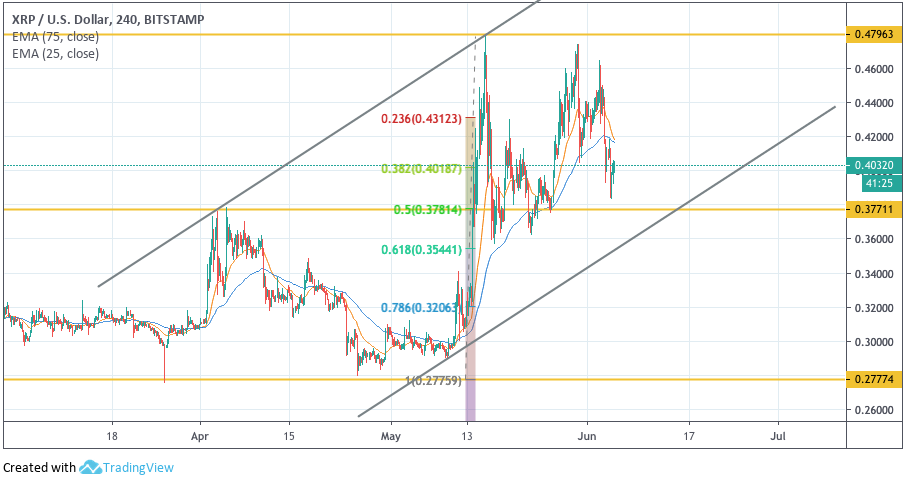 Therefore, the first goal of the rise here is the level of $ 0.4795. However, in most cases, model testing provokes a breakdown of the local maximum. Cancellation of this option can be a fall and a breakdown of the lower boundary of the channel, in which case the fall target will be the Fibonacci correction level of 88.6%, which indicates $ 0.3.

Cancellation of the option with growth can be a decrease with the breakdown of the lower border of the model and fixing quotes under the level of $ 0.36. In this case, a strong drop is expected with a target below $ 0.28. 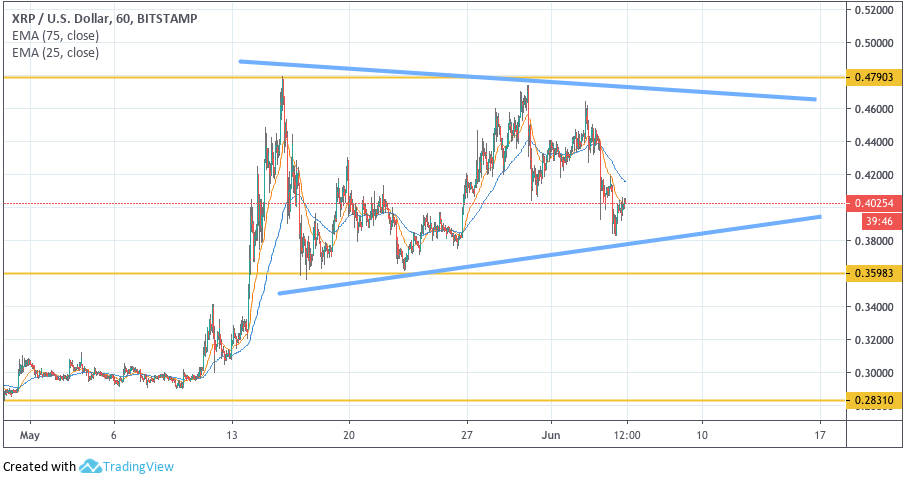