Cryptocurrencies have gone a long way since the day when, nine years ago, Laszlo Hanyecz had paid 10,000 bitcoins for two large Papa John’s pizzas, marking the first purchase of tangible goods for digital money. Although bitcoin is still far from being universally accepted by retailers, thousands of merchants around the world are taking crypto in exchange for goods — and their ranks grow daily. The latest of the big developments in this vein came up at this year’s Consensus conference, as blockchain startup Flexa made public its partnership with a number of major U.S. retailers. Flexa’s payments app, Spedn, will allow users to pay for their purchases in more than a dozen stores of the caliber of Barnes & Noble, Office Depot and Whole Foods with cryptocurrencies.

Payments, as we know, are just a tip of the blockchain iceberg, though. While expanding the number of stores and chains that accept digital money remains an important avenue leading toward mass adoption, there are several other domains where distributed ledger technology (DLT) can be of help to the retail industry. Some of these solutions are already up and running, and some hold the promise to bring about massive changes within the next few years.

There is evidence that cryptocurrency payments are gradually moving away from the fringe. The Kaspersky Lab Global IT Security Risks Survey, published in February, reported that a respectable 13% of more than 12,000 consumers across 22 countries have used cryptocurrency to pay for their online purchases. 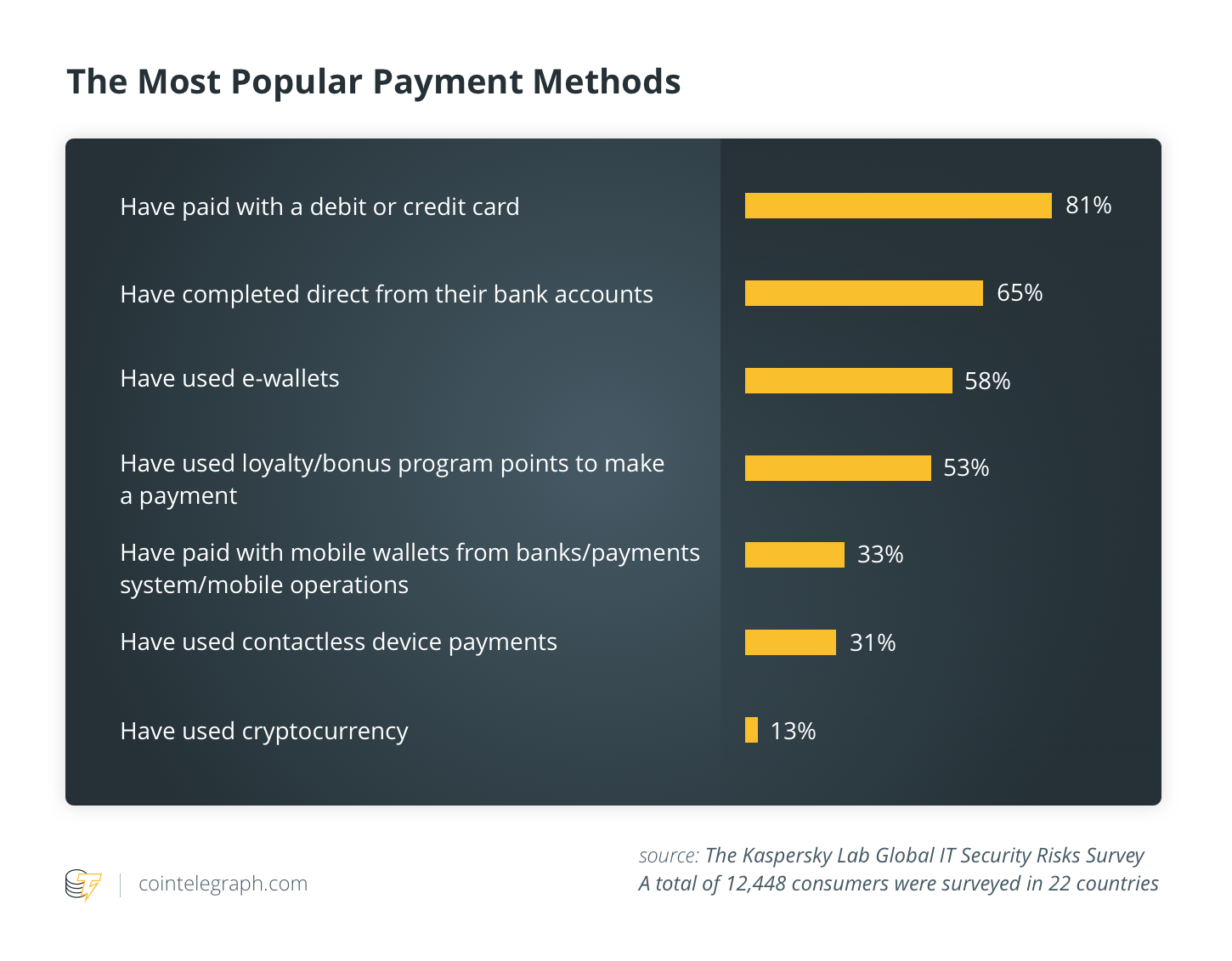 Companies that step on the path of accepting crypto might be driven by various motivations. Some might want to appeal to younger, technologically advanced customers by appearing savvy with the cutting-edge tech, while others embrace the promise of the technology and are bullish on crypto themselves. Digital money’s volatility remains the main deterrent for large corporate retailers. Intermediaries like Flexa, which are ready to stand in between corporate businesses and the dicey crypto market to absorb part of the uncertainty, come in handy as the big players find themselves willing to experiment with the new payment method yet are wary of potential risks.

It appears that this indirect model could become a dominant means of easing major retail chains into digital money payments in the next few years. For instance, this is how the recently announced crypto-payment partnership between Starbucks and fintech firm Bakkt is expected to work.

This running list tracks major stores and services that accept cryptocurrencies. You can already spend your digital money on travel, gift cards, jewelry, games and movies, moving services, gadgets, goods for your home and more. The list will surely keep growing.

Blockchain’s capacity to facilitate transmission of both value and information can give rise to more sophisticated, multifunctional forms of payments in the near future. A recently unveiled Civic Pay app is a vivid example: The solution will enable vending machine operators to simplify access to age-gated goods by combining payment, identity verification and earning reward points in one transaction.

Another important domain of the retail business that could use some optimization and enhanced fraud protection is loyalty programs. A primary tool for building a lasting relationship with a customer, these transaction-based programs oftentimes rely on infrastructure that is less secure than that of “real” payments, leading to a substantial increase in loyalty-fraud crime in recent years. Both value and personal data are subject to theft. In addition, many reward programs fall short of providing enough value to customers, as the ways of spending the hard-earned points are limited.

Introducing blockchain into the equation could help retailers address both issues. On the security side, hackers and fraudsters will have a much harder time penetrating a system that relies on a distributed ledger than one that stores all the data in a centralized database. In terms of consumer value, creating a token-based rewards ecosystem open to third-party businesses is a means of giving customers a wealth of diverse ways to spend their points.

This is exactly what American Express is looking to achieve with its Hyperledger-based rewards platform, which is geared toward enabling partner merchants to create customized rewards offers for the financial corporation’s clients. A prominent player in the space is Swiss firm Qiibee, which specializes in helping businesses tokenize their loyalty programs.

Another well-established and profusely covered family of blockchain use cases in retail has to do with the technology’s capacity to make the goods’ origins transparent and verifiable. The demand for such transparency may stem from different considerations, depending on a particular industry, with three key concerns being safety, authenticity and ethical sourcing.

The United States Centers for Disease Control and Prevention, the arm of the federal government responsible for promoting and protecting public health and safety, estimates that each year, 48 million people get sick, 128,000 are hospitalized and 3,000 die from foodborne illness. Outbreaks of diseases like E. coli and salmonella caused by bad groceries are still nothing irregular, and once the contaminated produce makes it to a large retailer’s enormous supply chain, it becomes difficult to track its origin in order to quickly extinguish the threat. It may take days until the source is identified, potentially causing the chain heavy losses and putting customers at risk.

Industry leaders have come to realize that recording every actionable event along the produce’s journey — from farm to table — on a blockchain is an efficient solution to this problem. It could also enhance stores’ ability to quickly identify and remove recalled foods, among other logistical benefits. The IBM Food Trust initiative, which offers its members a blockchain-based platform to track produce on every step of the supply chain, launched in the fall of 2016, when the U.S. retail giant Walmart began testing the system. Since then, Walmart has started requiring suppliers of certain types of produce to implement the DLT-powered solution. Other U.S. and global players in the field — such as Albertsons, Unilever, Nestlé and Carrefour — have joined the club as well, and many more are poised to follow suit.

Closely related to food safety but a conceptually different consumer demand is the need to verify that the product in question has been ethically sourced. As millennials and gen Z-ers are becoming the driving force of global capitalism, concerns over businesses’ environmental and social responsibility are becoming an increasingly conspicuous factor in purchasing behavior. Again, recording the product’s journey on an immutable ledger and creating a consumer-friendly interface enabling customers to obtain a clear picture of its origins can become a powerful tool for companies to build trust and get rewarded for transparency and responsible sourcing practices.

Some examples include the World Wildlife Fund-Australia championing the use of OpenSC, a supply chain tracking tool built on blockchain, to enable consumers make ethical choices when purchasing food. Customers will be able to obtain information regarding the products’ origins and life cycle by scanning a QR code on the package.

On another note, the Ford Motor Company is testing an IBM-built system running on Hyperledger Fabric that will trace supplies of cobalt — a material used in lithium-ion batteries that is seeing increased demand as the electric vehicles market expands. A large share of the world’s cobalt is mined in the Democratic Republic of Congo, where child labor and slave-like working conditions are widespread. The blockchain initiative would address these issues by providing Western corporations with a means of ensuring that the cobalt they purchase comes from the mines where a certain level of labor protection is enforced.

Finally, when it comes to luxury consumer goods, being able to establish the provenance of an item is of utmost importance. The diamond industry’s largest players, such as Alrosa and De Beers, have adopted blockchain-based solutions to track gems from mine to store and verify that their origins are clean — in both literal sense and with respect to previous ownership. Luxury apparel brand Alyx will implement Iota’s blockchain solution to showcase sustainable practices used on every step of its supply chain.

Retailers routinely record, store and utilize vast amounts of customer data. Blockchain applications related to streamlining processes in this line of their work present a less explored yet immensely promising area. Harnessing the benefits of distributed ledger technology could improve security, give customers more control over their data, and create new forms of marketing to help retailers meet consumer needs with higher precision and capture the value otherwise missed.

With the help of an artificial intelligence-powered recommendation system, retailers would be able to identify customers’ needs and advertise highly tailored offers to them. With advertising expenditures thus optimized, merchants will be able to reward those who opted into opening their data with tokens spendable at the store.

With a blockchain data-sharing system in place, customers could also proactively let retailers know about their needs and preferences, sending them shopping lists in the form of smart contracts. Coupled with the potential affordances of the Internet of Things to outsource the execution and delivery of such orders to machines, blockchain could become a fundamental infrastructure for the new era of fully automated shopping.

Confessions of a Crypto Noob