Tuesday, June 4 —  virtually all of the top cryptocurrencies are today seeing deep red in a market-wide correction, with bitcoin (BTC) dropping back below the $8,000 price point, as Coin360 data shows. 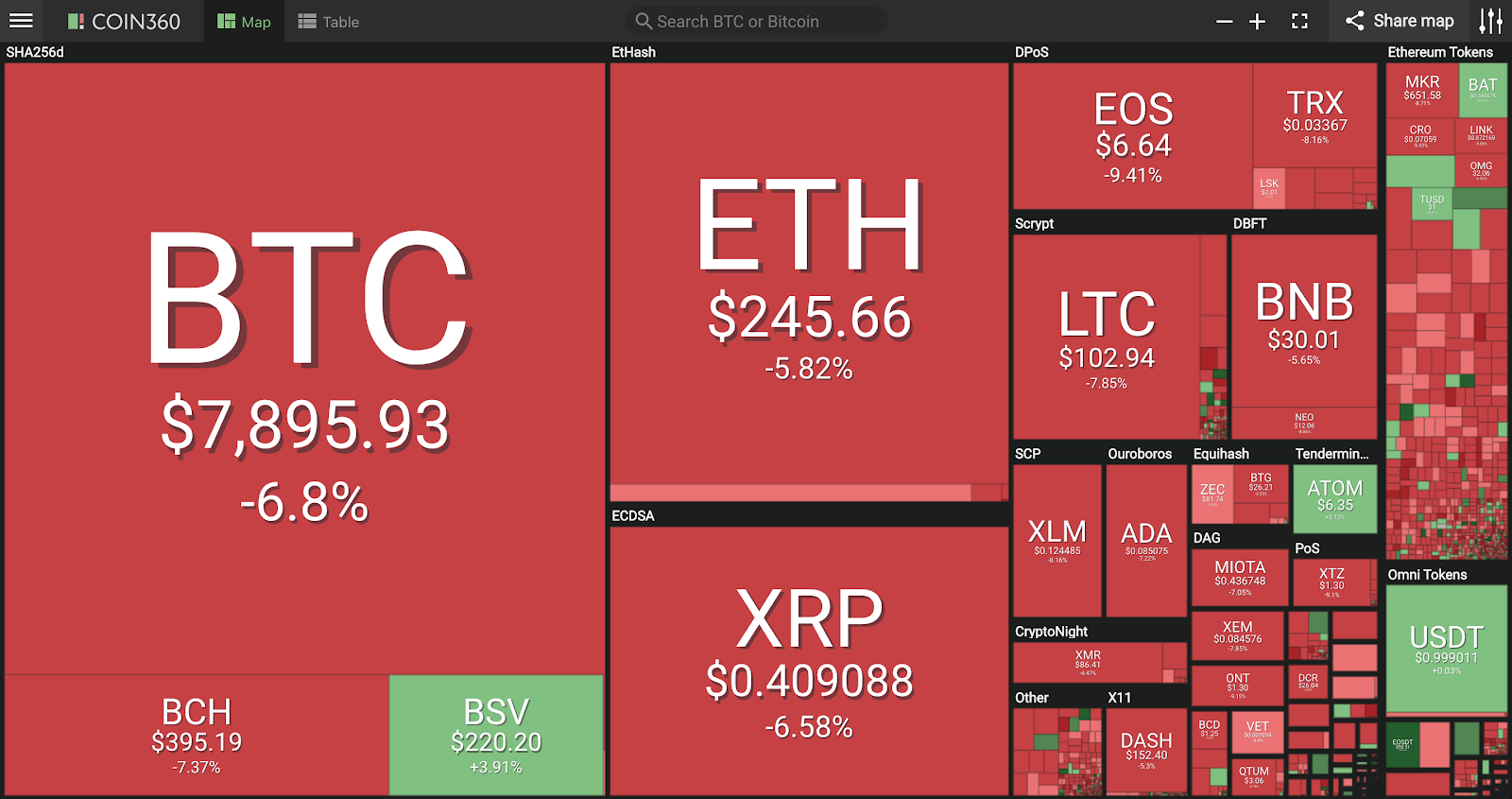 Having bullishly broken through the psychological price point of $9,000 at the end of May, bitcoin has gradually corrected downwards in subsequent days. To press time, the top coin is trading at $7,950 — roughly 6.7% down on the day and losing its hold on the $8,000 mark, according to CoinMarketCap data.

Bitcoin’s sharp tumble started very early trading hours, with the coin swiftly dropping from roughly $8,500 at midnight to around $8,000 by 1:00AM (UTC+1). Since then, the cryptocurrency has brushed an intraday low of roughly $7,865 before slightly regaining ground before press time.

On the week, the cryptocurrency’s losses have reached 8.78%. 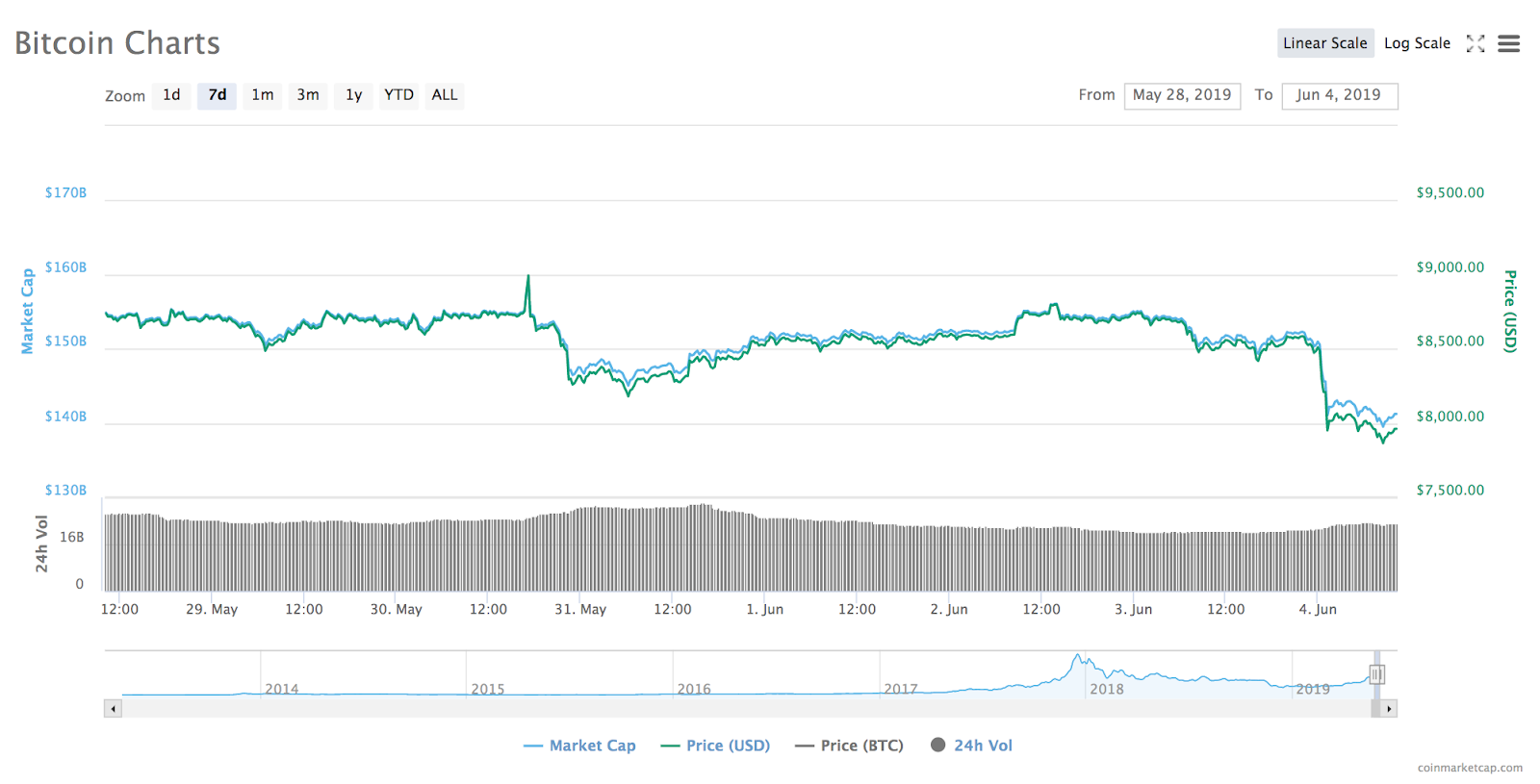 Largest altcoin by market cap ether (ETH) has seen a loss of 6.36% on the day to press time to trade around $247. Ether has today correlated with bitcoin’s price tumble, losing value during very early trading hours. On its 7-day chart, the alt has seen jagged volatility, breaking above $285 on May 30, then seeing seeing a sharp correction back to $250,before reclaiming the $260-70 range.

Ether is reporting an 8.7% loss on the week. 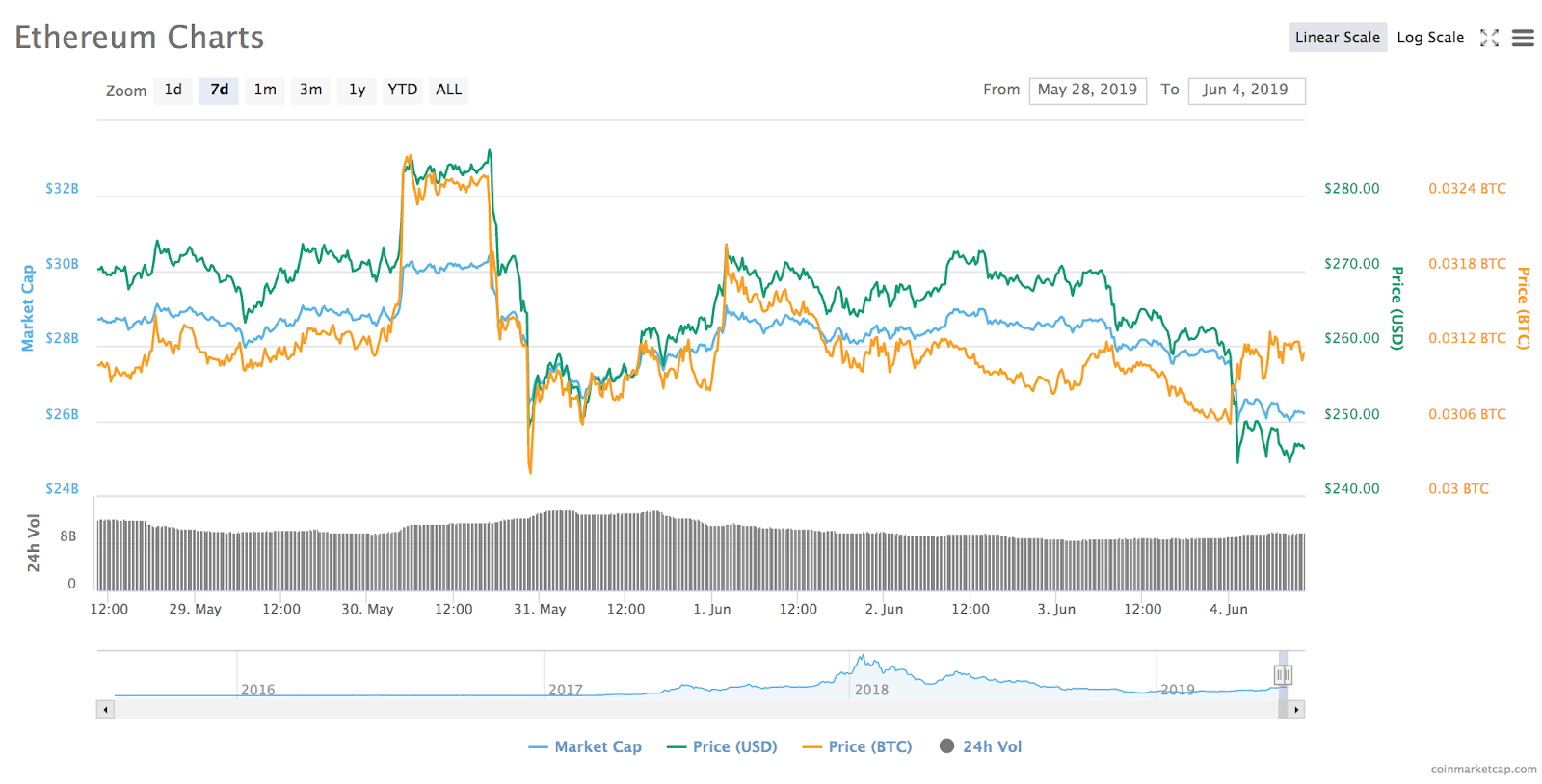 XRP has reported a 7% loss on the day to trade at $0.41 by press time. While holding its ground on the XRP-BTC chart, XRP has lost sharply against the U.S. dollar over the past 24 hours. On the week, XRP’s losses stand at a milder 3.53%.

Among the top ten cryptocurrencies at press time, all are in the red except for eighth-largest coin bitcoin sv (BSV), which has reported a 3% gain on the day to trade around $221.

To press time, the total market capitalization of all cryptocurrencies is at around $254.29 billion — as compared with an intraweek high of $286.55 billion on May 30. Bitcoin dominance is at 55.8%.

According to data released by the United States Commodity Futures Trading Commission yesterday, the number of open contracts for the Chicago Mercantile Exchange’s (CME) bitcoin (BTC) futures ostensibly hit at an all-time high for the week from May 27 to June 3.

I Would Not Long or Short Bitcoin, Says Billionaire Stablecoin Investor Druckenmiller