The Australian Securities and Investment Commission (ASIC) on May 30, 2019 published an updated guideline for initial coin offerings (ICOs) and cryptocurrency trading. These new guidelines are aimed at helping cryptocurrency-related businesses understand their compliance requirements vis-à-vis existing laws contained in the Australian Corporations and ASIC Acts.

The ASIC’s revampled ICO and cryptocurrency trading framework does not, however, cover guidelines for other regulators like the country’s tax agency and consumer protection group. The securities regulator say crypto businesses will have to refer to the published laws by those respective bodies.

By updating its ICO regulatory provisions, the ASIC is setting the stage for more robust and comprehensive governance of Australia’s cryptocurrency landscape. It also provides greater clarity to established rules that govern crypto-related businesses in the country.

One careful step at a time

The ASIC guidelines published on May 30 are the second update to Information Sheet 225 (INFO 225), which was originally released in September 2017. The first update to the document was back in April 2018.

At the time of publishing its first ICO guidelines, the ASIC said it wanted token issuers to be aware of the potential applications of the country’s Corporations Act of 2001 to ICOs. Commenting on the first-ever ICO framework, ASIC Commissioner John Price declared:

“We want to ensure innovative firms understand the regulatory framework they may be operating under and ensure they meet any obligations they may have when raising funds in Australia.”

Australia’s initial attempts at creating a governance infrastructure for crypto came at a time when China’s blanket ban on ICOs and digital currency trading was making the news headlines. The ASIC guidelines constituted a different approach to Beijing’s anti-cryptocurrency stance.

Rather than reinventing the wheel, the ASIC set forth modalities with which token issuers could apply already existing financial regulations to their cryptocurrency offerings. Many of the early regulations mirrored those already in place for private and public companies in the country.

As reported by Cointelegraph at the time, the 2017 guidelines classified ICOs into three broad groups — managed investment schemes, shares or derivatives and noncash payment (NCP) facilities. Token issuers were to ensure that their marketing activities clearly identified which group their tokens belonged to.

Apart from intimating stakeholders about the legal requirements for ICOs and cryptocurrency trading, in 2017, the ASIC also wished to convey important points about the risks inherent in digital currency investments. Speaking at the time, Commissioner Price said:

“ICOs are highly speculative investments, are mostly unregulated and the chance of losing your investment is high. Consumers should understand the risks involved, including the potential for these products to be scams, before investing.”

By the time of the first update in April 2018, the ASIC’s focus shifted to investor protection. Commissioner Price enjoined stakeholders to be aware of their responsibilities regarding ethical practices in the industry.

Fast-forward to 2019’s update and the ASIC seems to be laying out the groundwork for a more comprehensive regulatory environment. According to the latest update, token issuers and investment advisors dealing in tokens deemed financial products require an Australian Financial Services (AFS) license.

For cryptocurrency exchange platforms that list tokens that are deemed to be financial products, an Australian market license is mandatory. Such platforms may also require a clearing and settlement (CS) facility license.

The ASIC’s new governing principles for cryptocurrencies create an avenue for nonfinancial ICOs (utility tokens) to exist. Such a paradigm differs greatly from a jurisdiction like the United States, where its Securities and Exchange Commission (SEC) has consistently maintained that ICOs are always likely to be securities.

According to the ASIC, many ICOs turn out to be managed investment schemes that the commission says often exhibits the following characteristics:

For the ASIC, the important consideration for ICOs deemed to be managed investment schemes are the “rights” held by token owners. Consequently, issuers of such tokens must adhere to strict registration, licensing and reporting requirements. 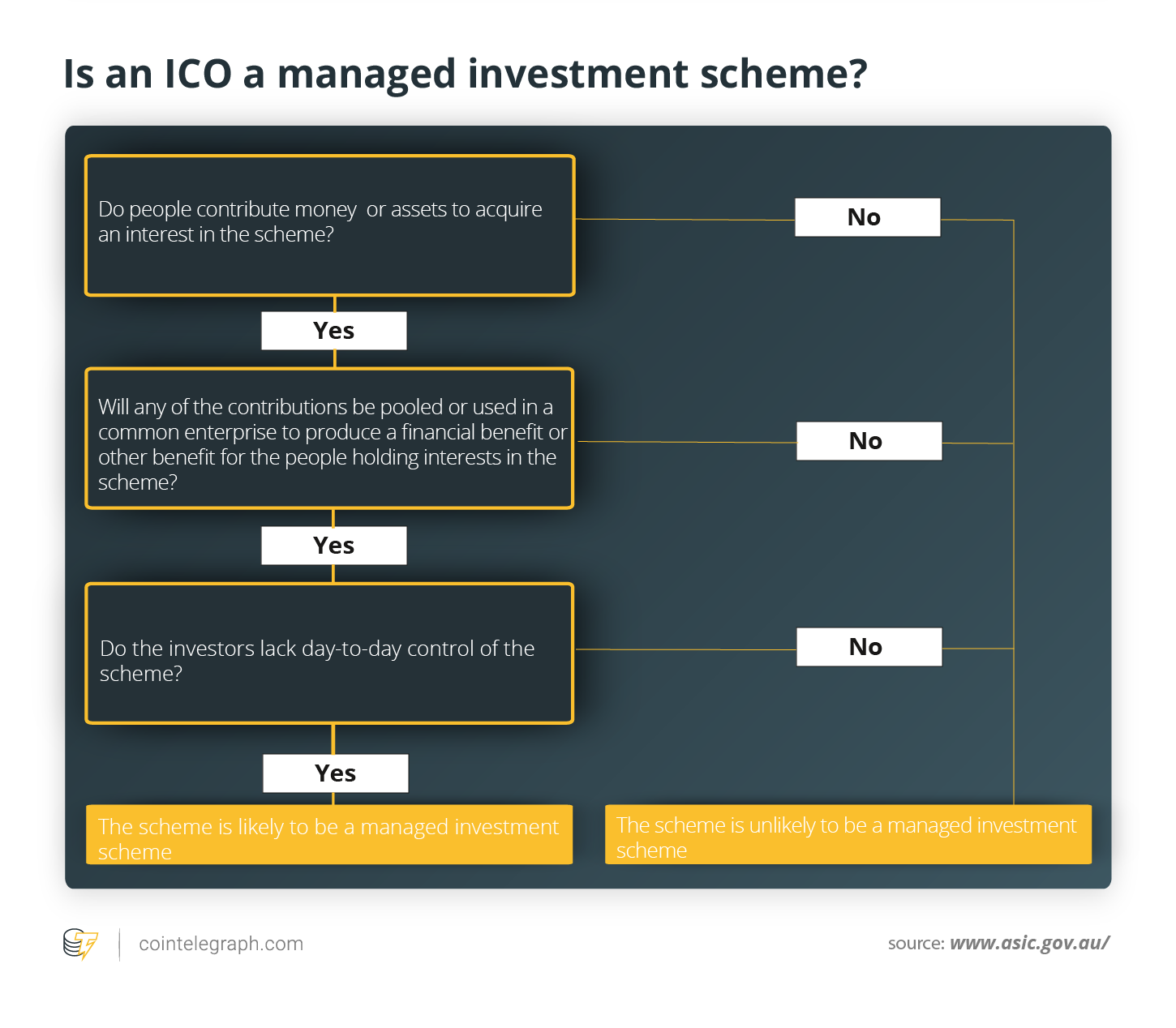 For example, they must register the ICO with the ASIC and obtain an AFS license. It is also compulsory to create a compliance plan, as well as a constitution that guides the ICO. Additionally, such token issuers need to put forward a product disclosure statement (PDS).

The PDS is an important compliance document for ICOs. Any misleading or inaccurate information contained in the PDS would mean investors who suffer losses from participating in the scheme would be entitled to a full refund of their initial investment.

Having created a framework that broadly classified ICOs as managed investment schemes, the ASIC also provided some details about token offerings deemed to be securities. For Australia’s top financial regulator, ICOs that closely resemble initial public offerings (IPOs) are what the commission considers to be “security tokens.”

These offerings provide owners many of the rights ascribed to shareholders, such as voting privileges. Being similar to IPOs, the ASIC mandates security token issuers to prepare prospectuses and follow all the licensing, registration and compliance requirements that apply to IPOs.

Cointelegraph reached out Zebpay, a cryptocurrency exchange that recently moved to Australia, regarding the implications of the updated ASIC guidelines on its operations. Responding via email, Kevin Lim, the head of compliance and legal at Zebpay, said: “We welcome the new regulatory framework as it brings more clarity and transparency to the crypto-market in general, and clarity is always welcome.”

Explaining further, Lim said that Zebpay’s listing is restricted to cryptocurrencies that do not fall under the definition of financial products, adding:

“We can state categorically that as a matter of company policy the Zebpay platform only lists tokens that ASIC regards as digital currencies (e.g. Bitcoin, Ethereum and Litecoin), and we do not anticipate deviating from this company policy for the foreseeable future. We have not seen anything in the most recent changes which suggest there has been any change to that position. ASIC has previously confirmed that trading platforms that confine themselves exclusively to the trading of digital currencies are not, in their view, a financial market or purveyor of financial services.”

For the ASIC, these updated guidelines also form part of the commission’s efforts to fight cryptocurrency-related fraud in conjunction with other relevant agencies, such as the Australian Competition and Consumer Commission (ACCC). As previously reported by Cointelegraph, the ACCC declared that crypto scams amounted to $4.3 million in the country in 2018.

Compared to the previous year, 2018’s crypto scam figures constituted a 190% increase in such crimes. However, cryptocurrency scams as a whole still only represented a minute figure (less than 6%) of the total proceeds from fraudulent activities recorded in the country.

One thing to note is that in its updated guidelines, the ASIC has repeatedly warned against providing misleading information about token offerings. Since 2018, the financial regulatory watchdog has began taking concrete steps in combating ICO fraud. Back then, the ASIC declared that it would ensure that all “threats of harm” from the digital currency market are mitigated.