Monday, June 3 — after seeing a short recovery attempt yesterday, crypto markets have seen another negative correction, with most of the 20 major coins in the red.

According to data from CoinMarketCap, only four out of the top 20 cryptos by market cap are seeing gains at press time, with cosmos (ATOM) and bitcoin sv (BSV) seeing the largest gains over the day, up around 15.3% and 15% respectively. In contrast, tron’s (TRX) price has plunged 8%, which is the biggest loss over the day among the top 20. 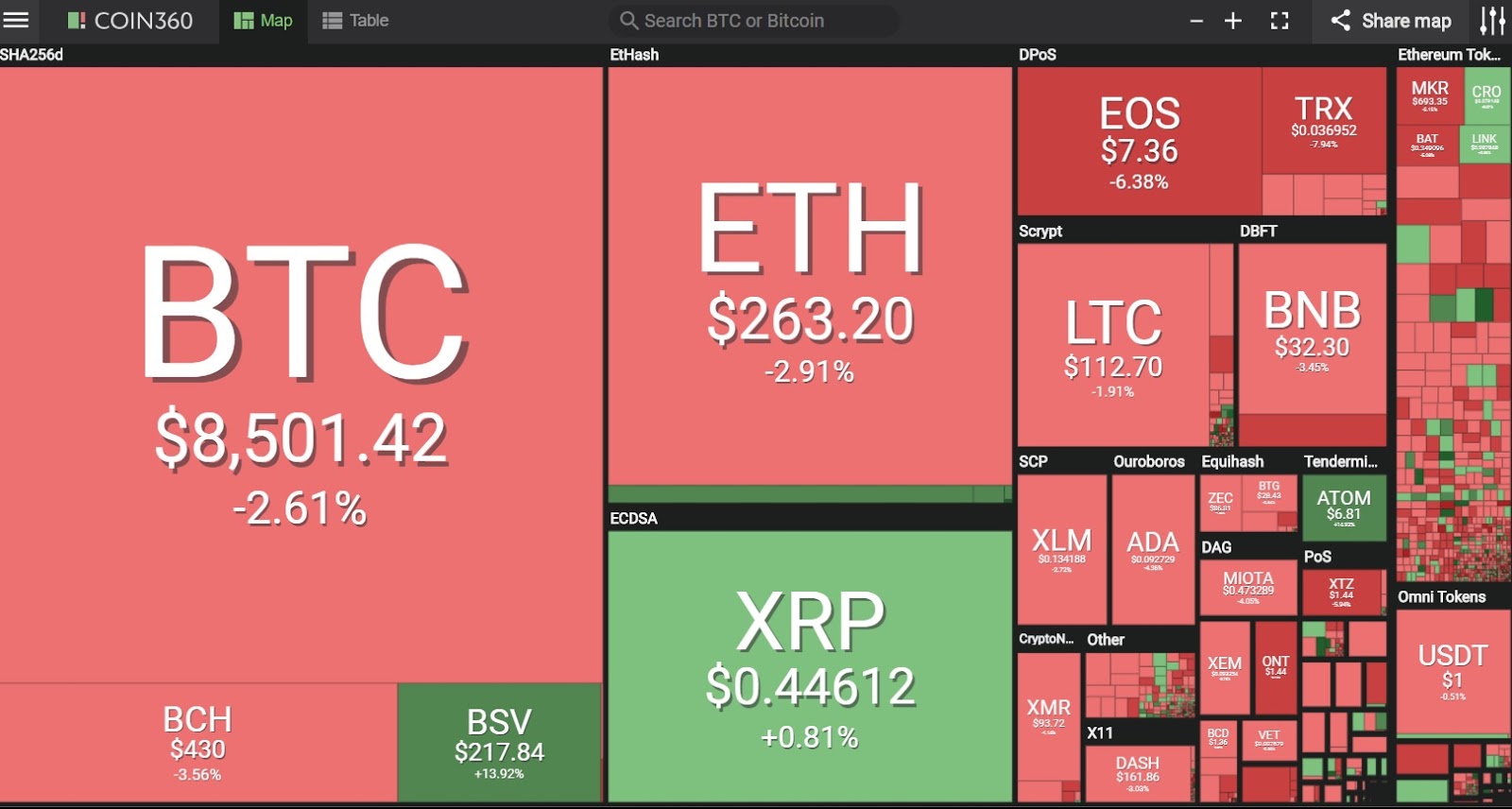 After breaking a new 2019 threshold of $9,000 on May 30, bitcoin (BTC) has seen a significant price correction after multiple recovery attempts. The biggest cryptocurrency had not managed to hold the $8,600 price point yesterday, and even dropped below $8,500 earlier on the day.

At press time, bitcoin is trading at $8,550, down 2% over the past 24 hours. Bitcoin has seen sufficient volatility on the day, with its intraday high of $8,808 while the intraday low amounted to $8,471 as of press time. Over the past seven days, bitcoin is down around 2.4%.

XRP, the third-top cryptocurrency by market cap, is one of the few top 20 coins that has seen some gains on the day. At press time, XRP is up about 1% to trade at $0.446, and is also seeing considerable growth over the past 7 days, up almost 8%.

Total market capitalization has dropped below the $270 billion threshold earlier today, accounting for $271 billion at press time, according to CoinMarketCap. Daily trade volume hovers around $70 billion after reaching $104 billion over the past seven days.

Yesterday, Cointelegraph reported that the decentralized exchange (DEX) launched by the major crypto exchange Binance will block website access to users from 29 countries starting from July 1.

Earlier today, social media giant Facebook was reported to be discussing the regulatory issues around its upcoming stablecoin — called Globalcoin — with the United States regulator the Commodity Futures Trading Commission.

The United States stock market tumbled today amid the intensifying trade war between the United States and China. At press time, the Dow Jones Industrial Average (DJIA) is down about 355 points by 1.4%, while the S&P 500 (SPX) and Nasdaq (NASDAQ) Composite dropped 1.3% and 1.5% respectively.

Oil prices are seeing moderate gains at press time, with West Texas Intermediate (WTI) crude oil and Brent crude having edged up 0.7% and 0.5% respectively, according to Oilprice.com, while the OPEC basket is up 2.1%.

Meanwhile, gold prices have reportedly hit a two-month high today amidst the trade tensions between the two major economies as well as Washington’s threat of tariffs on Mexico, which intensified concerns of a global recession, CNBC reports. At press time, both spot gold and U.S. gold futures are up around 0.8% to trade at $1,315 and 1,321 per ounce respectively.