On May 30, overnight, the valuation of the crypto market dropped by $19 billion as the price of bitcoin (BTC) briefly dropped from $9,000 to $8,000 — a staggering 11% within a few hours on exchanges like Bitstamp. The drop of bitcoin to $8,000 was not visible on charts of market data providers like CoinMarketCap because the movement occurred in a short time frame. 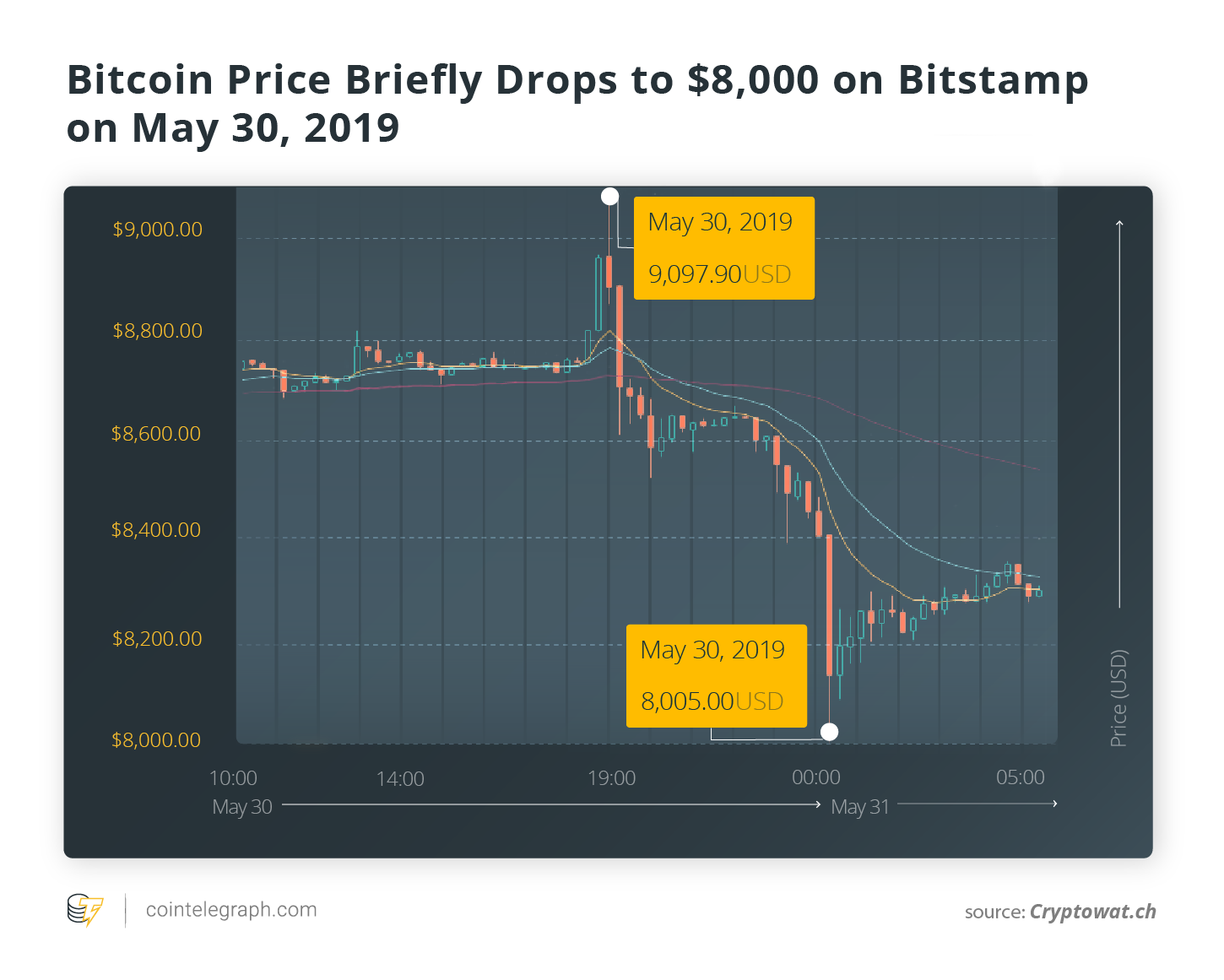 Bitcoin’s price immediately recovered to $8,300 following its abrupt decline, relieving some of the pressure from the rest of the crypto market and continues to rise in price as of press time.

Despite the $1,000 decline in the price of bitcoin on May 30, the asset has performed strongly against the U.S. dollar throughout the past month. 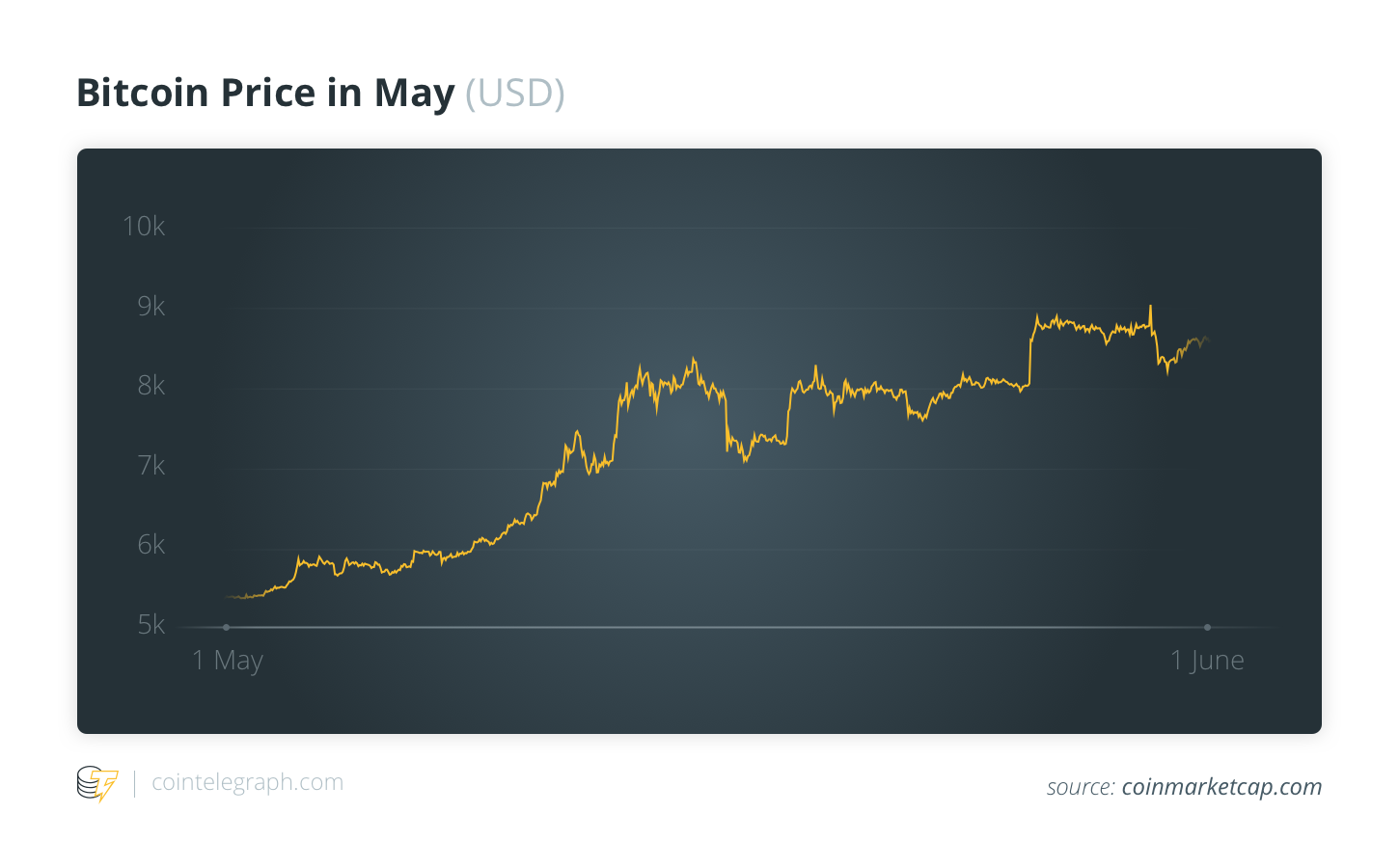 Ether, bitcoin cash, litecoin, XRP and other large market cap crypto assets closed that day with a 9% drop against the United States dollar, while the timely recovery of bitcoin allowed the dominant crypto asset to minimize its drop to about 5%.

Technical analysts in the crypto sector, such as Josh Rager and Cred, foresee $8,200 as a crucial support level that could prevent the asset from dropping to the $7,000 region once again.

The last time bitcoin’s price dropped below $7,000 was in a flash crash on March 17, when it fell to $6,400, triggered by the unexpected sell-off of 5,000 BTC on Bitstamp, which then led to the mass liquidation of contracts on BitMEX.

Bitcoin has since demonstrated strong momentum, with signs of “fear of missing out” (FOMO) among investors, creating a vertical rally to the upside.

Cred told Cointelegraph in an interview that, as long as the $8,200 support level is defended, a rise to $9,600 remains a realistic target and a high time frame resistance level.

“I think the vertical rally is more a sign of FOMO and disbelief as opposed to something to be inherently concerned about. I’m looking at the $9600 area as the next high time frame resistance area if price trades higher. Closer to current price (which is pulling back at the time of writing), I think losing $8200 — the level price broke out from and thus nearest support — will take us to the $7300 area. Mid $6000s remains the best and final area for longs. Losing that level and staying below $6000s would shift my bias to bearish.” 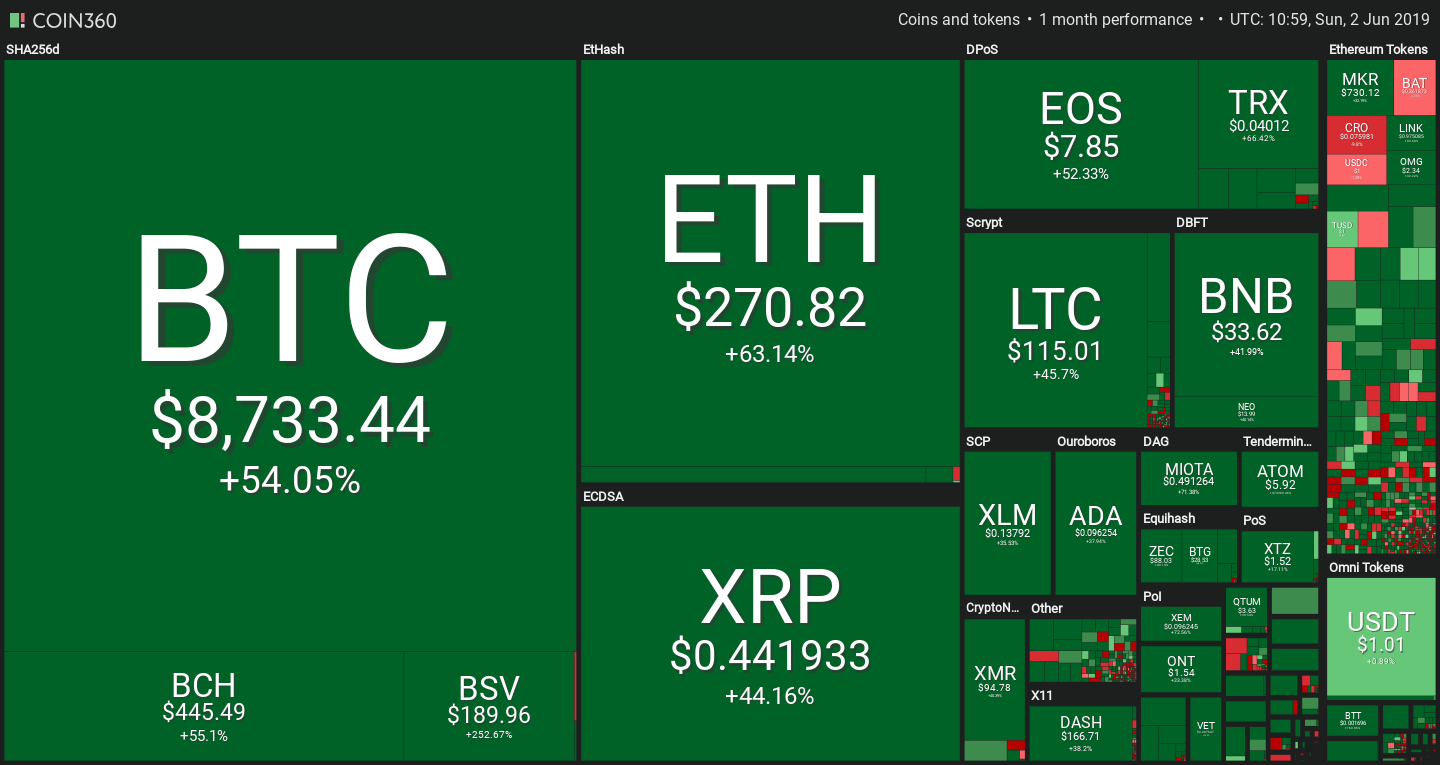 Still, based on the historical performance of bitcoin and its tendency to see a major correction in the tune of 30% to 40% following a large spike in price, Cred noted that a 30% drop in the future remains a possibility.

Throughout the past three years, bitcoin has generally shown sustainable momentum, especially from 2016 to late 2017. However, it was regularly prone to relatively corrections in short time frames.

“In 2017 and years before that, Bitcoin would regularly correct circa 30% before continuing higher. I think we will see something similar, but trying to short this market presumptively is a bad play. Any significant pullback above the old $6000 floor is a dip I’m interested in buying, the closer to $6000 the better,” Cred said.

It remains to be seen whether there are sufficient fundamental catalysts on the horizon that would push bitcoin’s price above $9,000 and potentially to $10,000, considering the lack of resistance above $9,000.

The following factors have been mentioned in recent weeks as potential catalysts for an increase in bitcoin’s price:

On May 30, at its weekly peak, the price of a share of GBTC, a publicly listed investment vehicle operated by Digital Currency Group’s Grayscale that enables investors to invest in bitcoin through a stock market in OTC Markets, hit $12.40.

In its Q1 2019 report, Grayscale emphasized that the majority of investments in its products, including GBTC, came from institutional investors, which was at 73%.

“Institutional investors comprised the highest percentage of total demand for Grayscale products in the first quarter (73%). This was also consistent with their share of inflows over the trailing twelve months (73%). As we have mentioned in previous reports, many institutional investors may view the current drawdown as an attractive entry point to add to their core positions in digital assets.”

The overall increase in confidence and improvement of sentiment around the crypto market have also led the hash rate of the Bitcoin blockchain to achieve a 2019 high of 59 exahash, nearing its all-time high of 60 exahash that was reached in September 2019. 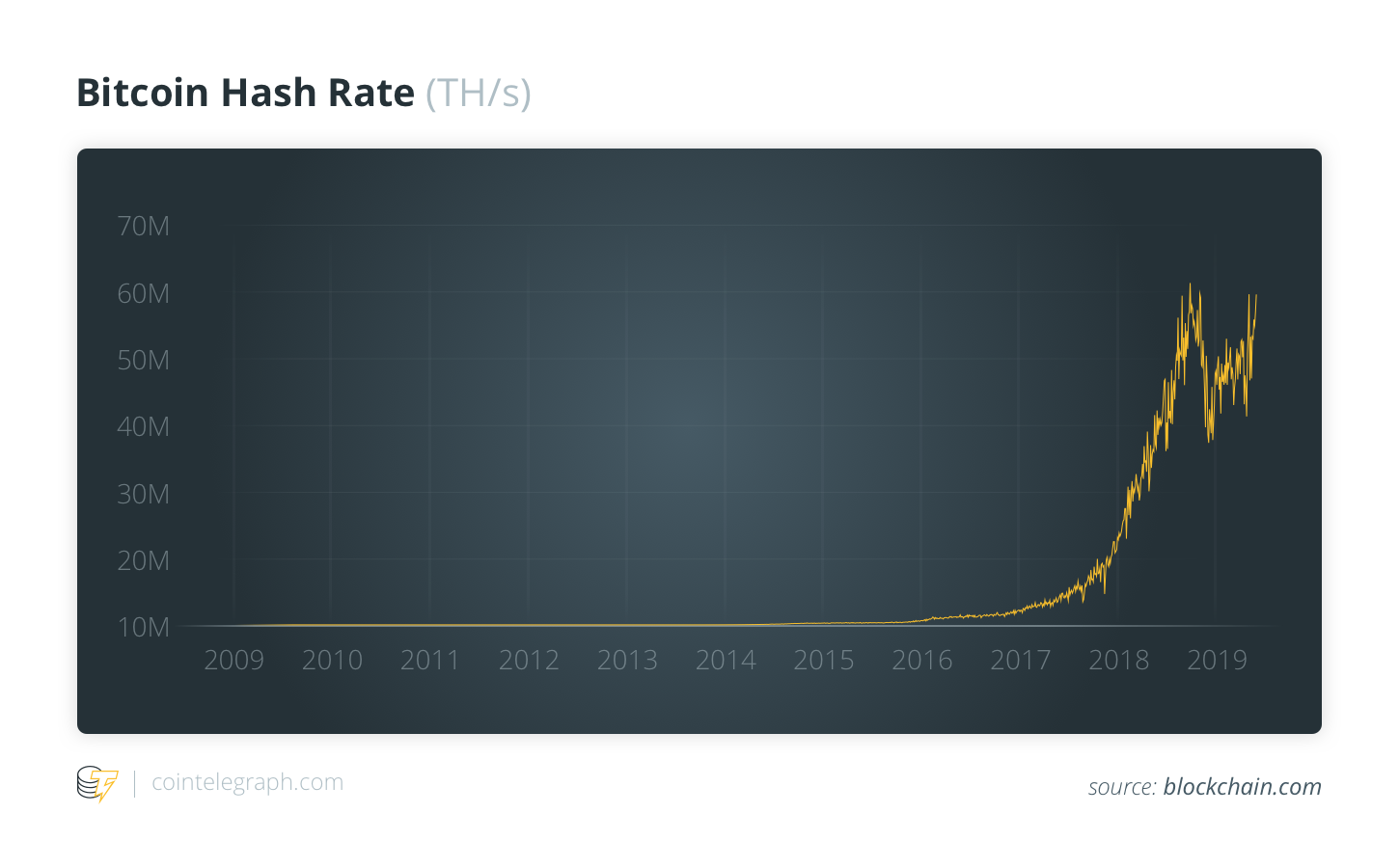 As the price rises and mining becomes more profitable, the hash rate supporting the Bitcoin blockchain is expected to rise continuously in the near term, which could be considered a positive indicator for stability.

Moreover, as Cred said, the momentum of bitcoin in recent months could have simply been primarily fueled by speculation rather than fundamental catalysts. Hence, it is possible that the sheer rise in demand among investors in the broader market pushed the crypto market.

“As facetious as this response may seem, price rallied due to an imbalance between buyers and sellers (the former being dominant). The market is trending hard. Typically in strong trends, consolidation (as was the case before the breakout) leads to continuation. One can speculate over ‘causes’ for a move in price but it’s often just that; speculation.”

Is a strong correction still due?

Speaking to Cointelegraph, cryptocurrency technical analyst and trader Josh Rager said that a strong correction in the crypto market is still due.

Similar to Cred, Rager stated that, based on technicals, bitcoin’s price could push above $9,000 and rise up to $9,400. However, the analyst noted that traders have shown a willingness to take profits in the early $9,000 region, which could lead to correction if BTC achieves a new yearly high in the near term:

“If Bitcoin can hold and close above $8200 on the daily chart there is hope that it could continue to push up to $9400+ but I still believe that a strong correction is due.

“And at this time after the distribution pattern in upper $8ks, the spring above $9,000 with sharp downturn would be a clear sign to me that people have started taking profit prior to the $9400+ level. Everyone was watching $9400+ to start taking profit and because of this, the move came early and it seems that many were front run by whales.”

In the short term, depending on the ability of bitcoin to defend on important support levels, Rager said that there exists a possibility of the asset plunging to $7,000, if it loses momentum and sees a steep sell-off.

While traders generally foresee a strong drop in the price of bitcoin if it struggles to float above $8,000, opinions differ as to the extent the asset would fall if it falls below $8,000.

Some have suggested that the strength of the momentum of bitcoin may make it highly unlikely to see $7,000 again in the upcoming weeks. Rager added:

“Many were waiting to buy at $3k and below, and the price moved up from $3100 as buyers stepped in prior. Many were waiting for confirmation in the low $6ks and price ripped right through resistance, surprising many as it went to $7k.

“And now we see it again as many were waiting to take profits above $9400 and price quickly broke down as large volume selling put pressure on the price as we currently wait to see if Bitcoin will indeed continue to break down to at least the low $7ks with a possibility of pushing all the way down to $5700.”

The rise of sentiment around bitcoin and the rest of the crypto market has led industry executives, particularly exchange operators, to become more upbeat regarding the short- to medium-term trend of the market.

Cameron Winklevoss, a co-founder at major U.S. crypto exchange Gemini, expressed optimism toward the trend of the asset in a tweet:

We talk about going to Mars all the time. We have no limits to our imagination when it comes to space travel. But when it comes to the future of money, curiously many suffer from an acute failure of imagination. The Bitcoin rocket ship is fueling up, make sure to book your seat!

ShapeShift CEO Erik Voorhees put to bed the inaccurate comparison between bitcoin and the tulip bubble of the 1600s, stating that well-known bubbles have historically not consistently rebounded and achieved all-time highs.

Tulips never re-emerged to hit new ATH’s. Bitcoin does it every couple years. Anyone equating the two needs to explain this discrepancy.