Bitcoin continues to grow steadily and fulfilled the first goals of its movement. Many other assets also show strong recovery after cryptowinter. In general, the market looks charged for continued growth. However, in order to speak with confidence about the present price rally, it remains to wait for the key levels to be broken.

The first cryptocurrency continues to grow steadily, during which quotes were able to test the resistance level of $ 8500. Breakdown of this area will indicate a potential continuation of the upward movement with a target of $ 10,000. 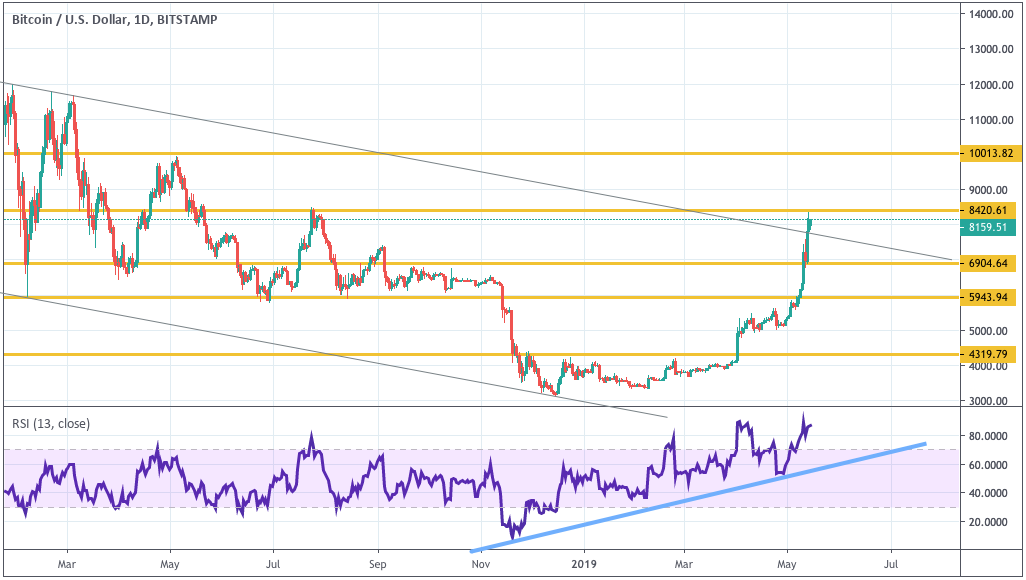 As we can see, the asset could break through the upper limit of the downward channel. As the main trading idea, there is a reduction to the broken border of the channel, and then continued growth. An additional signal in favor of such a variant of the bitcoin price movement will be a rebound from the support line.

RSI values ​​continue to remain above the level of 80, which indicates the presence of a strong upward momentum and overheating of the market.

Cancellation of this scenario can make a strong fall and a breakdown of the support level with the closing of BTC/USD at $ 6900. In this case, we should expect the continuation of the correction with a potential target near the $ 5,900 area.

On the hourly chart, the cryptocurrency moves within the ascending channel. However, quotes have not yet consolidated above the resistance level. Technical analysis indicates a potential test of the lower boundary of the channel and an attempt to further upward movement. 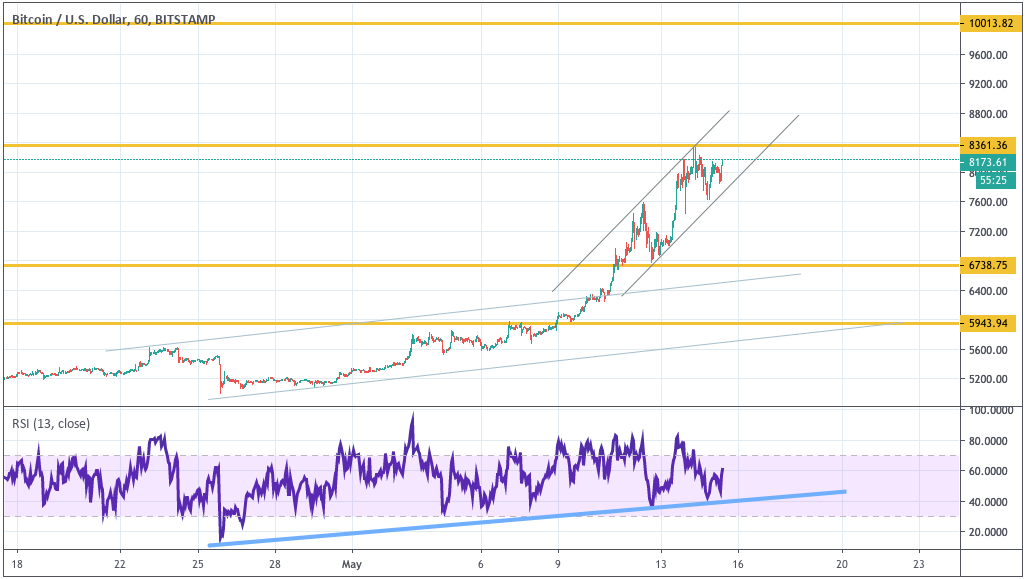 The RSI has already tested uptrend several times, indicating a potential continuation of growth. The end of this scenario is a breakdown of the lower boundary of the channel with the closure below $ 7,550, which would indicate a continuation of the fall to $ 6,740.

EOS cryptocurrency demonstrated a rebound from the upper border of the Ichimoku Cloud, which indicates a continuation of the upward trend. Moreover, the indicator signal lines crossed, forming a strong signal in favor of growth. 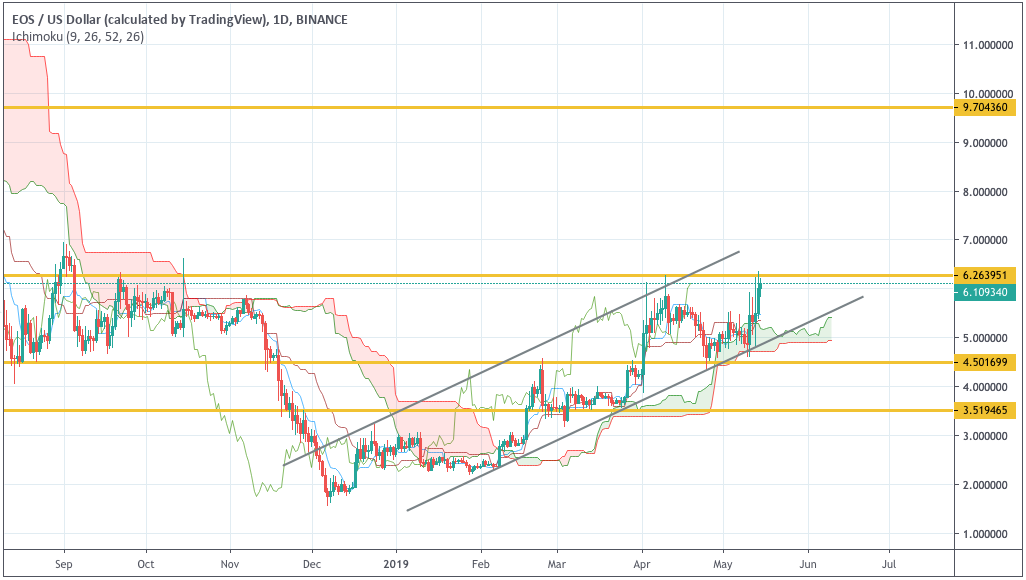 However, here the quotes are still testing the resistance level. Fixing above $ 6.35 will indicate potential growth acceleration with a likely target of $ 9.70.

The main idea is to expect a slight downward correction of the asset with a test of the upper boundary of the “cloud” and continued growth. The end of the lifting option may be a decline and a breakdown of the support level with a close of $ 4.50. In this scenario, the goal of further fall is the level of $ 3.50.

On the hourly chart quotes could leave the descending channel. There is also an upward momentum. We should expect a test of the lower boundary of the rising channel and the continued growth of EOS/USD.

The end of the scenario may be a drop in the value of the asset and closing below $ 5.50. In this case, the target of the fall is the area below $ 4.50. Confirmation of the growth is a breakdown of resistance at $ 6.25. 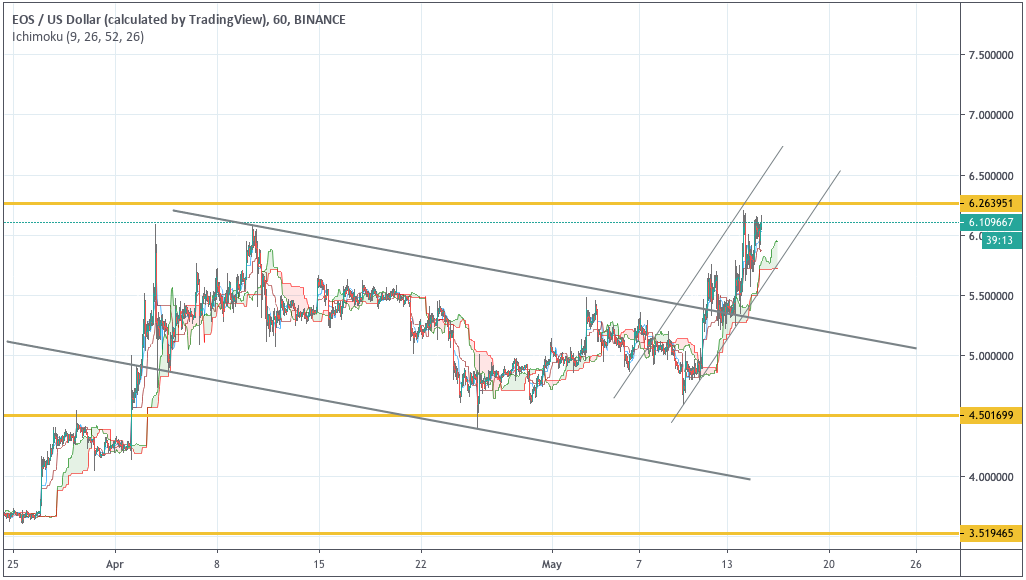 ETH/USD does not lag behind other assets, also showing strong growth. Quotes struck the upper limit of the Bollinger Bands. In addition, Ethereum is trading above the upper boundary of the rising channel. Such a breakdown is a strong signal to continue the growth of ETH/USD with a goal at a distance equal to the width of the ascending channel. 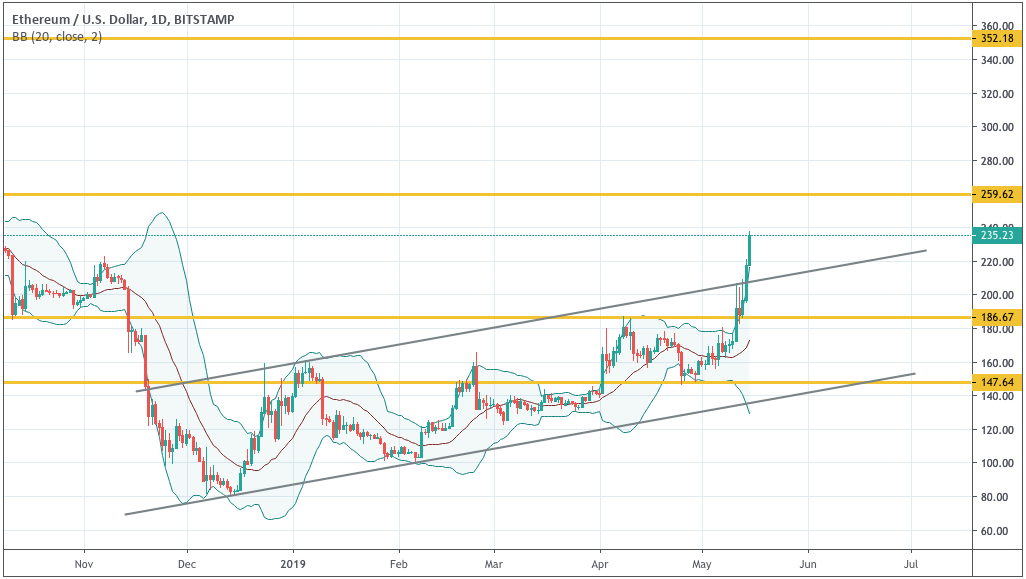 In the future, we can expect an attempt at correction with the test of the broken channel boundary, and further – the continuation of growth with a target at the level of $ 285. Cancellation of this option is the fall and the breakdown of the support level with the closure of under $ 185. In this case, we should expect the continuation of the fall with the goal below $ 145.

ETH/USD on the hourly chart also demonstrates an accelerated growth. Within the framework of the short-term movement option, we can expect a test of the middle Bollinger Bands indicator and continued growth with a target of $ 260. 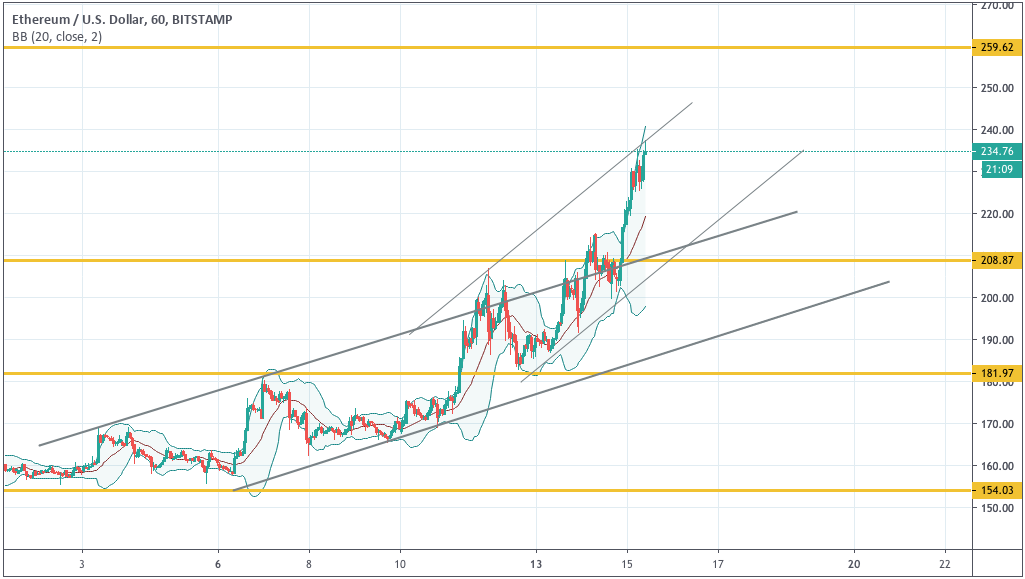 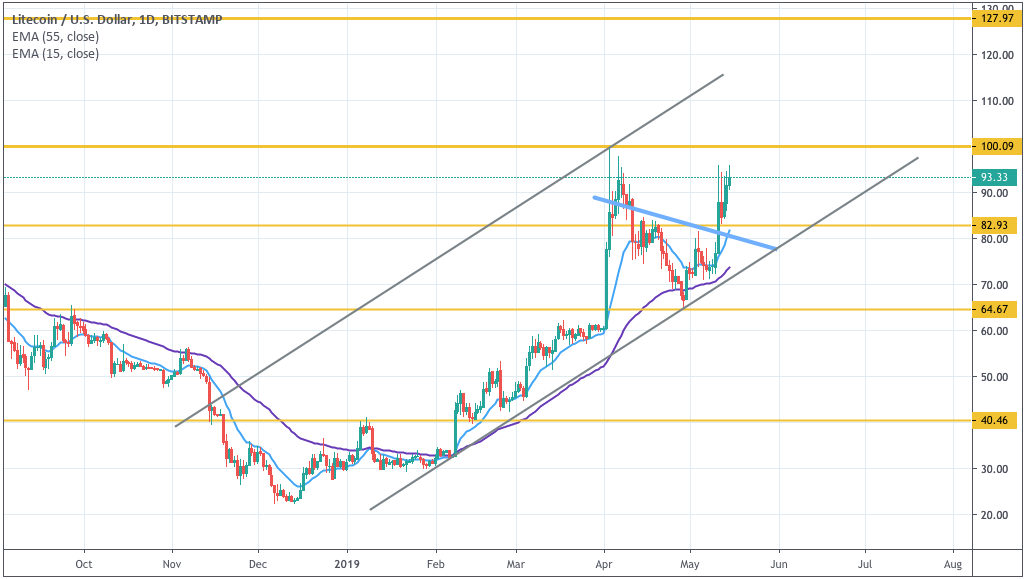 LTC/USD confidently pushed away from the area between the EMA, which indicates the strength of the current trend. With high probability, we can talk about the imminent breakdown of the $ 100 level.

The situation on the daily chart indicates a growing likelihood of a decline with a potential test of $ 85 and a subsequent continuation of the rise. Cancellation of this option is the fall and breakdown of support with a close below $ 80, which will indicate that the quotes go beyond the ascending channel and continue the development of the downward correction.

Technical analysis of LTC on the four-hour chart also indicates a probable breakdown of the psychologically important level of $ 100. A test of the support line on RSI is in favor of such a scenario. 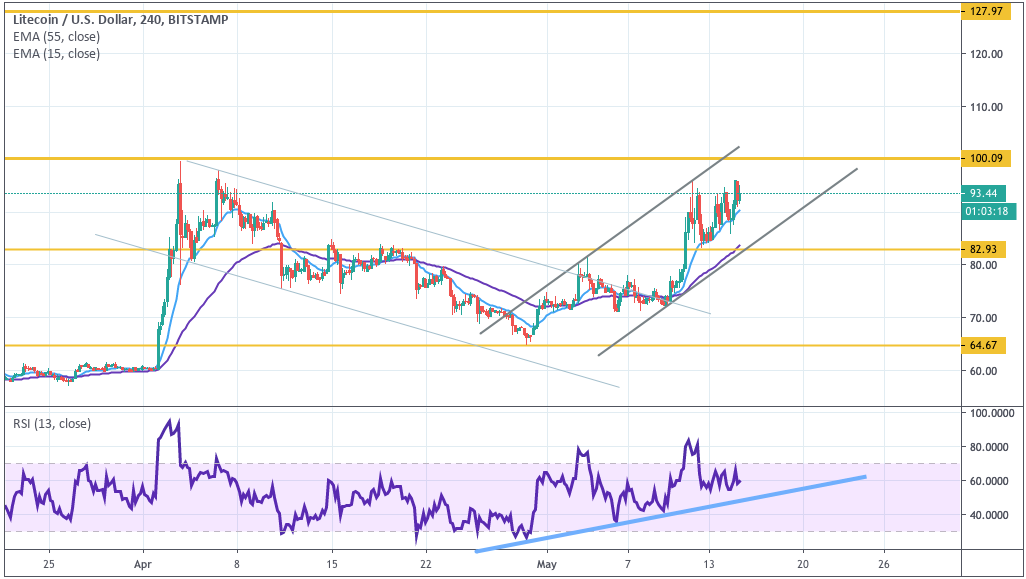 As a short-term trading idea, we can expect a test of the lower limit of the ascending channel before continuing growth. The end of this scenario is the fall after the breakdown level of $ 80, which can continue to the level of $ 65.

After a prolonged test of the support level, the XRP token showed an expected rebound. 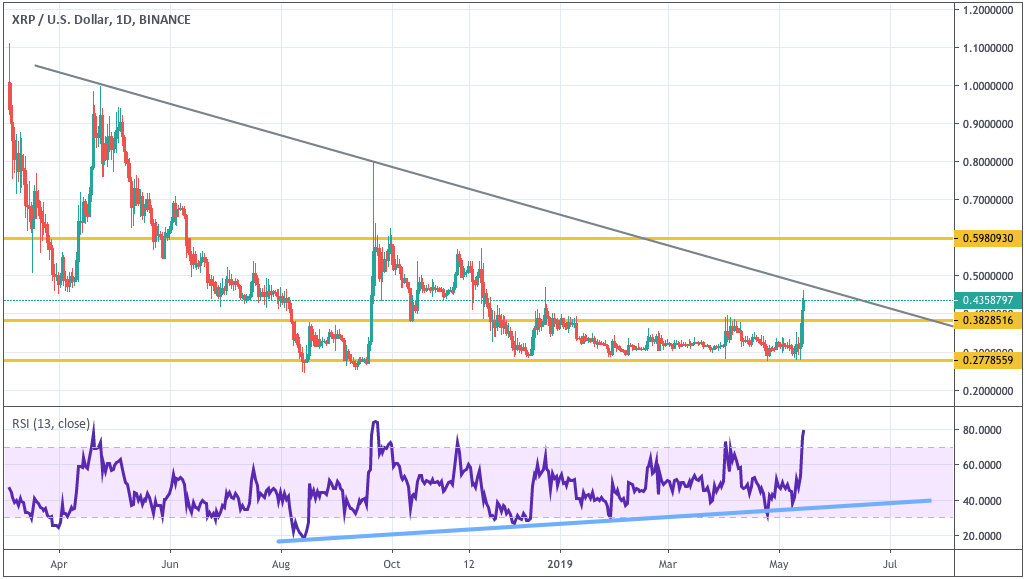 On the four-hour chart, we also see quotes go beyond the limits of lateral movement: 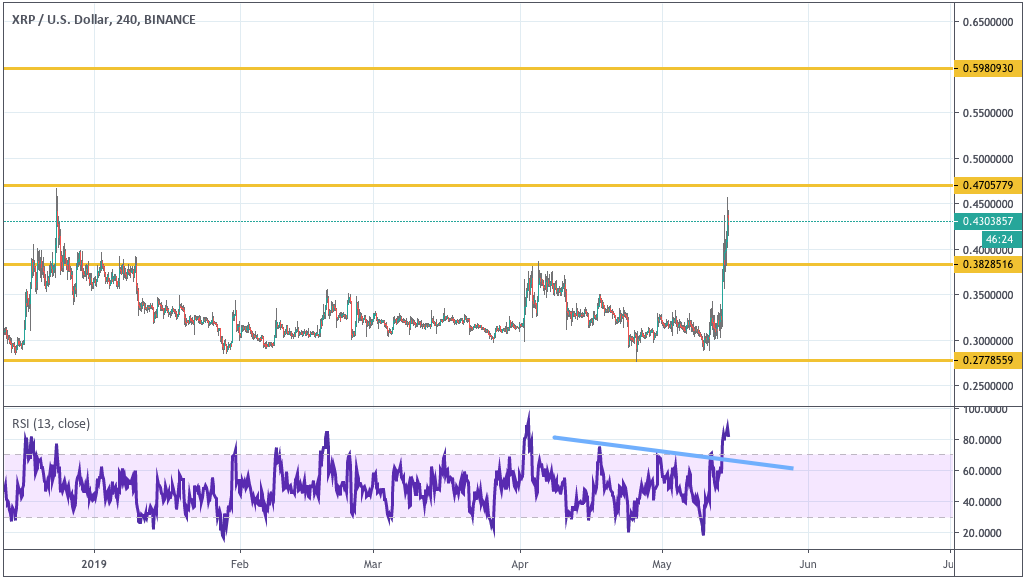 Expect continued growth of at least the width of the corridor. Therefore, with the breakdown of the resistance level and closing above $ 0.4755, we can expect growth to accelerate to the next level – $ 0.5980. An additional signal in favor of this movement is the breakdown of the downward trend line on the RSI indicator. Cancellation of this forecast is a fall and a breakdown of $ 0.3820, which will indicate the return of Ripple to the trading corridor.