According to the BitMEX Research, the majority of the Ethereum (ETH) raised by ICOs have been sold making over $700 million in the process by selling them a higher price. Though still about 3.8 million ETH are left, the research puts “panic sell” theory to rest.

About 3.8 million ETH still in possession of ICOs

The Initial Coin Offering (ICO) projects have sold about as much worth of Ethereum (ETH) as raised by these them according to the latest report by BitMEX, a crypto trading platform that provides up to 100x leverage.

The world’s third largest cryptocurrency, Ethereum is at around $230 at the moment, down about 83% from its all-time high (ATH) at approximately $1,400.

In its report, it has been revealed that instead of suffering from the recent fall in ETH prices, the projects have apparently already sold their Ethereum to the maximum. To start with, more than 15 million ETH has been raised by about 222 ICOs. Now, close to 4 million ETH are remaining with these ICOs. An interesting fact is EOS has raised about as much ETH as other projects combined.

Moving further, the projects gained millions by selling ETH as BitMEX states, “At the macro level, the ICOs have already realised US$727m in profits by selling Ethereum at a higher price than when received it.

Despite the peak to trough 85% fall in the value of Ethereum, the projects are still sitting on unrealised profits of US$93m.” 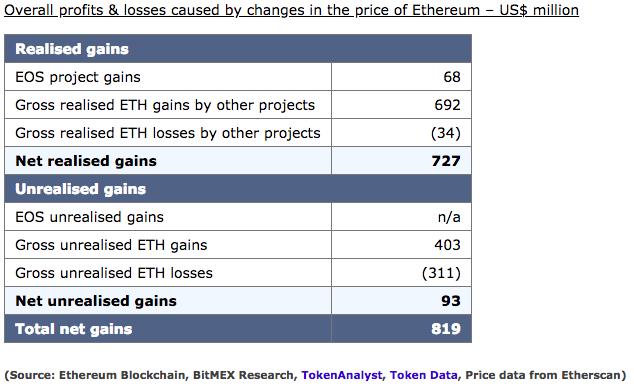 As for the project that realized the most gains has been the 5th largest cryptocurrency EOS, at 178th position Raiden Network (RDN), Iconomi (ICN) of 127th rank, and placed at 1619th place Filecoin (FIL). 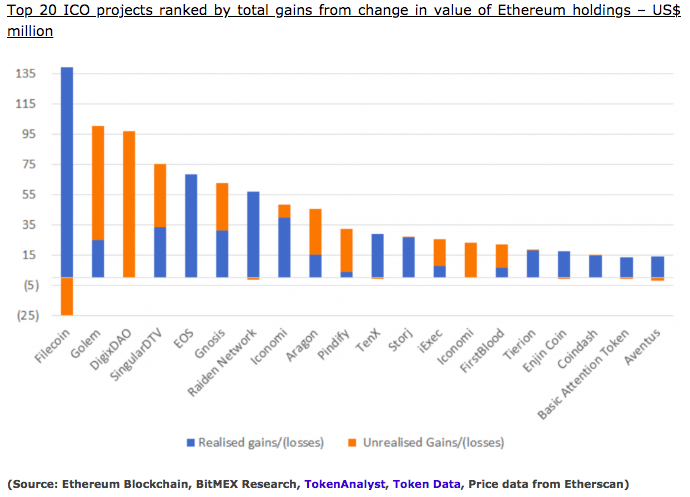 No panic selling of ETH by ICOs

BitMEX did issue the chances of flaws in the research on its Twitter,

“As ever there are flaws in our analysis: We may have missed some ICOs, We may have wrongly assumed that Ethereum transferred out of a projects address cluster was sold, Many of the figures we provide are estimates. We apologise for any inaccuracies.”

The report according to BitMEX clarifies that ICO treasury accounts have “much lower level of exposure to the price of Ethereum” than presumed by many.

It further puts the panic sell theory to rest. Panic Sell basically means “many ICO projects were sitting on a large treasure trove of Ethereum and that as the price of Ethereum fell, these projects were going to “panic sell’, fearful of being the last project holding their Ethereum bags.”

The report says, on the macro level, the projects might be feeling “reasonably confident” than needing to panic sell.

“Quite what this means for the Ethereum price going forward is unclear, however, we believe we have shown the “panic sell” thesis is either false or will only occur to a lesser extent than some expect” concluded BitMEX.

According to the BitMEX Research, the majority of the Ethereum (ETH) raised by ICOs have been sold making over $700 million in the process by selling them a higher price. Though still about 3.8 million ETH are left, the research puts “panic sell” theory to rest.

Is $232M ICO Tezos [XTZ] Moving towards a New Start or an Impending Death?