BCH/USD settled at $280 during the last weekend trading sessions. The bear pressure that swept across the market slashed Bitcoin Cash gains from weekly highs around $335. The price corrected lower within the falling channel. A move under the 100 simple moving average (SMA) 1-hour resulted in further declines below $300. The declines remained unstoppable until BCH/USD touched the support congestion area at $280.

The entire cryptocurrency market shows green shots everywhere following the return of the bulls on Tuesday. Bitcoin Cash is among the biggest single-digit gainers with gains in the excess of 4% on the day. There was a struggle at $290 after recovering from the key support at $280. However, BCH bulls pushed the price further towards the channel resistance which coincided with the 100 SMA. Trading past this level gave way for a bullish engulfing candlestick which zoomed past $300 and extended the gains to form an intraday high a $312.97 (on Coinbase).

While the surge has lost steam and Bitcoin Cash retreated to $304, the technical and fundamentals levels have remained intact. The relative strength index (RSI), for instance, is in an upward direction and fighting to enter the overbought. The uptrend in the indicator comes after it recovered from levels around 19.13 (oversold) on Sunday. Moreover, the upward divergence in the moving average convergence divergence (MACD) at +2.48 confirms the developing bullish momentum.

Therefore, a broader look at the chart shows that Bitcoin Cash is likely to make a further correction to the upside which is immediately capped at $310. The second resistance is seen at $320 while the supply zone at $330 will open the gate for gains that could test $350 and eventually break 2019 high towards $360. 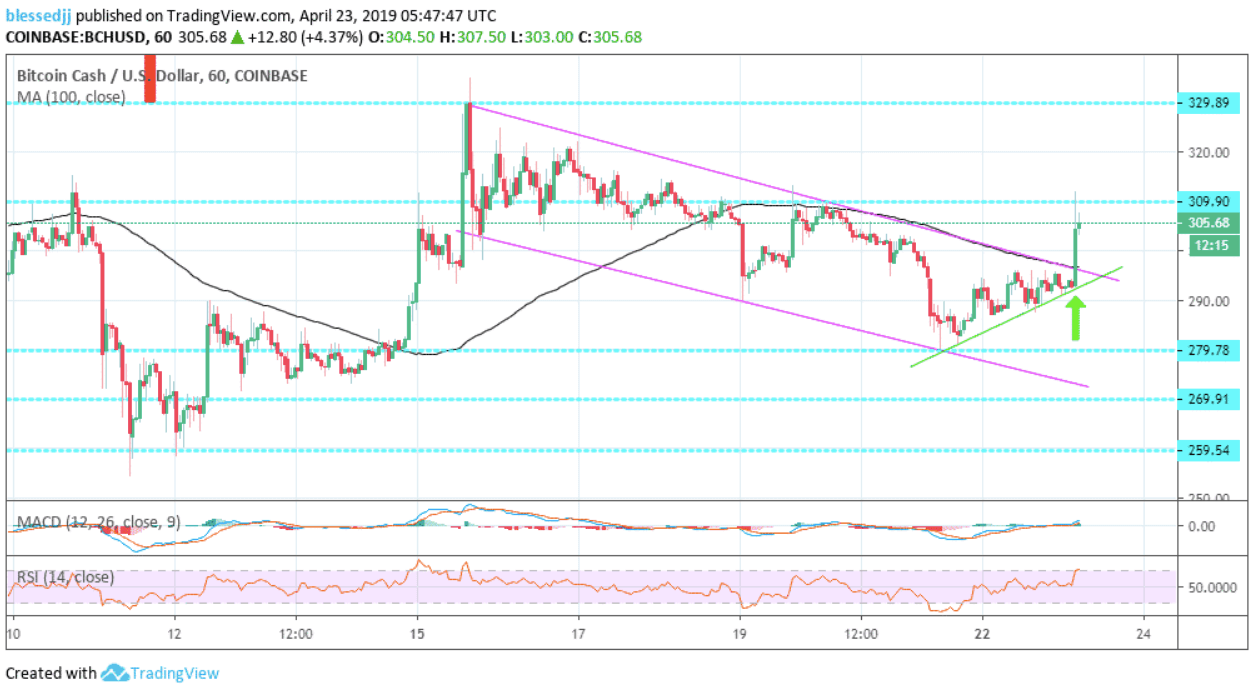 Bitcoin Cash correction below 100 SMA culminated in declines that found support at $280.
Bitcoin Cash is among the biggest single-digit gainers with gains in the excess of 4% on the day.